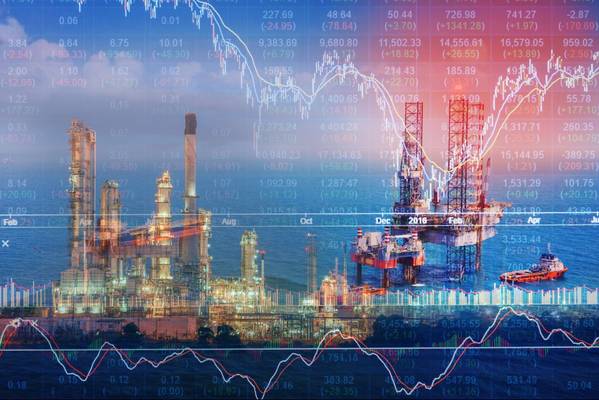 BP’s announcement that it is going to write down the value of its exploration assets by $8-10 billion (56-70%) shows the accounting impact of its energy transition strategy.

A review of oil companies that have released Q1 2020 financial results reveals big differences as to whether balance sheet assets have been impaired due to the crash in oil prices.

Looking first at a selection of mid-tier E&P companies, there is no consistency of approach.

Aker BP wrote down the value of its assets while fellow Norwegian player Lundin did not; Hess, Murphy, and Noble impaired their assets while fellow US player Talos did not; and Colombian E&P companies Gran Tierra and Parex incurred an impairment charge but Canacol did not.

Of the twelve of the mid-tier companies analyzed that impaired their asset values, the total charge was US$7.4bn. The weighted average write-off was 6% of the booked asset value before impairment.

So what oil prices were used for the impairment tests?

To complicate matters further, some US-listed companies use the SEC methodology of the first day-of-the-month price over the preceding 12 months for impairment testing.

The Brent oil price 2020 average to end-May was US$40.2/bbl, down from the Q1 average of US$50.3/bbl. More of the mid-tier E&P companies that did not incur impairment charges in their Q1 results (and those companies such as Cairn, Premier, and Tullow which do not issue quarterly financial results) are likely to write-down asset values in mid-year financial statements.

What about the major oil companies?  The oil price assumptions used by BP, Shell, Total, and Equinor in their Q1 reports are shown in the chart below. The Brent futures curve from start-June is also shown (the prices at which a contract for future delivery or payment can be concluded today). 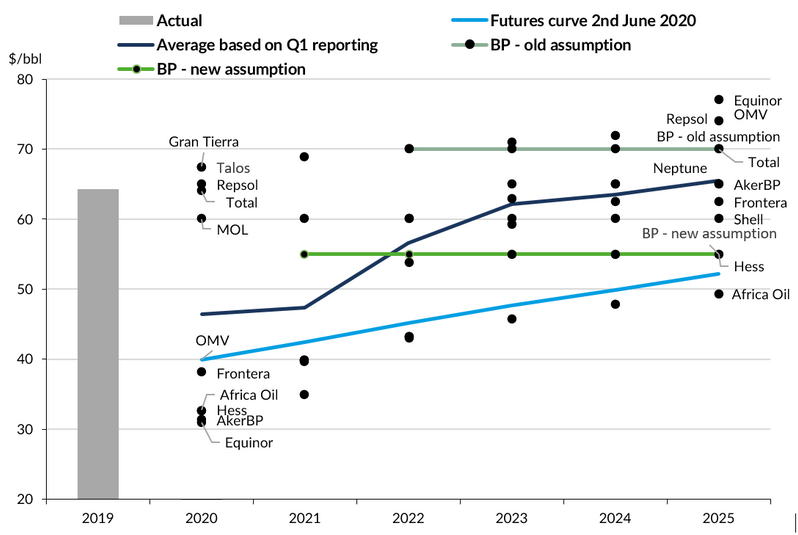 There is a wide difference in oil price assumptions both in the short term and long term.

Gran Tierra and Talos both use the SEC ceiling test methodology based an average price over the previous 12 months, which was $67.5/bbl.

The difference in long term Bent oil price assumptions in the companies studied is just over US$30/bbl, and many long-term oil price forecasts remain unchanged.

Such a wide divergence in how E&Ps are seeing future oil prices and testing the value of assets on their balance sheet means that return on asset and return on capital employed comparisons are going to be difficult.

It is also notable that some of those with the most ambitious greenhouse gas emissions reduction targets, like Repsol and Equinor, also have the most bullish long-term oil price assumptions.  Some might argue that those positions are inconsistent. Expect more huge headline losses from asset impairments in Q2 results.

Keith Myers, President of Research at Westwood Global Energy Group, and a member of the technical advisory board of the Natural Resource Governance Institute.

He joined BP in 1987, having graduated with a geology PhD at Imperial College. Following a variety of technical roles, he became Senior Commercial Advisor leading several major business negotiations for new business access.

He also led strategy for BP’s business in West Africa in the Strategic Alliance with Statoil. After leaving BP in 2000, he was an advisor to numerous energy companies on strategy and partnership issues. He founded Richmond Energy Partners in 2006 to provide independent advice to investors in smaller oil and gas companies.

REP advised some of the largest funds and institutions investing in the sector and provided exploration strategy and benchmarking services for the global exploration industry. REP launched Wildcat, the online global exploration intelligence service in 2014, and REP became part of Westwood Global Energy Group in 2015. Myers takes a keen interest in the oil sector governance and serves as a member of the advisory group for the Natural Resource Governance Institute.