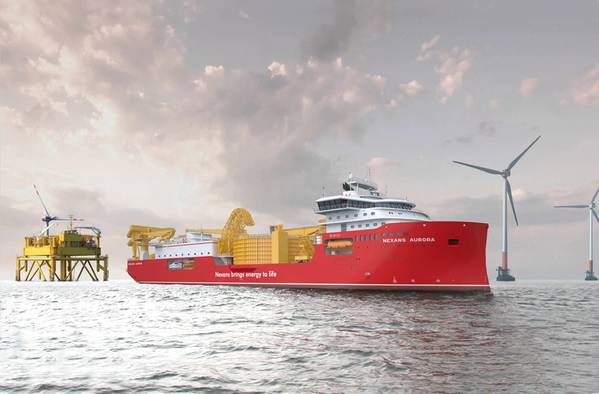 Artist’s illustration of Nexans Aurora cable laying vessel at an offshore windfarm. The vessel, currently under construction, will visit Nexans’ Charleston, S.C. plant, to pick up the export cables for the Seagreen project. Courtesy: Nexans

The contract calls for Nexans to design, manufacture and install the high voltage (HV) onshore and offshore export cables.

Construction on the 1,075 megawatt (MW) project, which is located 27km off the coast of Angus, will start next year. When completed in 2022/23, Seagreen 1 will be Scotland's largest wind farm.

The export cables for the Seagreen offshore wind farm project will be installed by the Aurora, Nexans' new cable-laying vessel (CLV). The Aurora is currently under construction and will be delivered in the second quarter of 2021.

The electricity generated by the Seagreen turbines will be transmitted via the subsea export cables to landfall at Carnoustie. Once ashore, the land cables will transmit the electricity to a new substation at Tealing where it will feed in to the UK's national electricity transmission system.

As reported earlier in June, French oil and gas major Total agreed to buy a 51% stake in SSE Renewables' Seagreen 1 offshore wind farm project, and with the deal the project also reached a final investment decision.

Following the FID, SSE started awarding construction and equipment contracts. Apart from Nexans, the contracts have so far been awarded to Subsea 7, Lamprell, MHI Vestas, and Petrofac.