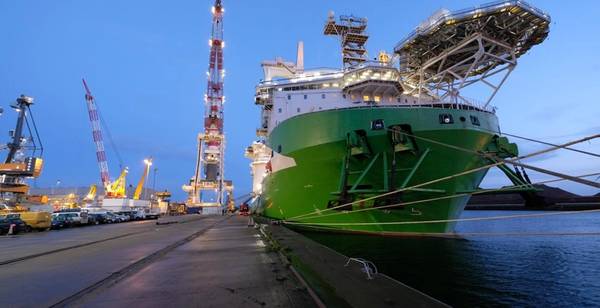 Deme Offshore said: "A serious accident has occurred today on board of offshore installation vessel ‘Orion 1’ at the occasion of and during crane load tests. The vessel is under construction and owned by COSCO (QIDONG) OFFSHORE CO., LTD. The vessel is moored at the quayside at the Liebherr construction yard in Rostock, with the crane undergoing several load tests."

"The crane has suffered significant damage, while damage to the crane and the vessel will be investigated in the upcoming days and weeks," DEME said.

The vessel is scheduled for delivery to DEME NV in the second half of May 2020.

Both Liebherr and Deme have previously boasted that the giant crane, measuring more than 145 meters, could lift nine fully loaded Airbus A380 aircraft in one go.

Liebherr has said that the crane, named HLC 295000, is the biggest offshore crane Liebherr Maritime Cranes has ever constructed.

The recently delivered Orion is planned to be deployed for the construction of the largest offshore wind farms, to service the oil and gas industry and for the decommissioning of offshore installations.

‘Orion’ was to head straight to the Moray East offshore wind farm project in the UK for the installation of 103 jackets. It is not clear if this will now be delayed and for how long.

Below is a video shared on YouTube showing the moment the crane collapsed: