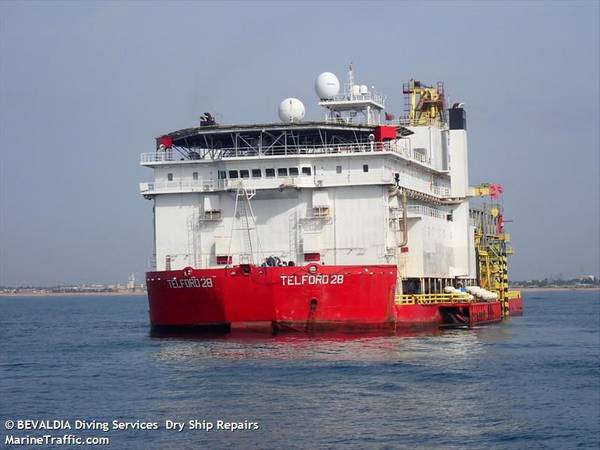 In an email sent to Offshore Engineer, Telford Offshore said: "We can confirm that the Telford 28 came under attack while anchored at Cuidad Del Carmen, Mexico on the evening of 14th April."

According to Telford Offshore, the injured crewmember was quickly transferred to hospital ashore and is recovering well.

"Our main concern and always will be is ensuring the continued safety and wellbeing of all personnel onboard our vessels. Telford Offshore will co-operate with the relevant authorities in the follow-up of this incident to prevent any further attacks on other vessels in the area," the company said.

This is not the first time an offshore vessel has been attacked in the past weeks in Mexico.

Previously, Dryad Global reported, citing info from the Italian Coastguard, that an Italian flag vessel was attacked in the Gulf of Mexico, 65nm NW, Puertos Dos Bocas, on April 10. Dryad did not name the vessel, but reports suggest it was the offshore supply ship Remas, owned by Italian company Micoperi, that was attacked.

Also in Mexico's offshore oil and gas space, there was an incident on April 4 in which armed assailants opened fire on a pipelaying vessel.

In a comment on April 10, maritime intelligence agency Dryad said the following about the security situation on the Mexican side of the Gulf of Mexico: "The Gulf of Mexico continues to be a relatively stable region, despite reports of an increase in offshore criminal activity.

"Dryad assesses that there is a significant degree of under-reporting of incidents in the region. Piracy is concentrated in the southern Mexican state of Campeche. Pirates have historically targeted oil rigs and tankers with the intent of robbing personal valuables and items which can be sold on black markets in and around Mexico.

"Despite the low risk, piracy incidents can be violent, often involving weapons and firearms with a willingness to shoot and intimidate. Despite the recent reporting, it is assessed that the Gulf of Mexico continues to present a low-risk trading option for commercial vessels.

Commenting for Offshore Engineer on the Telford 28 attack and the security situation in the area, Telford Offshore's Chief Operating Officer Duncan MacPherson said: "Clearly the situation has worsened in the past weeks. We would like to extend our gratitude to the Mexican navy and port authorities for their support during this period."