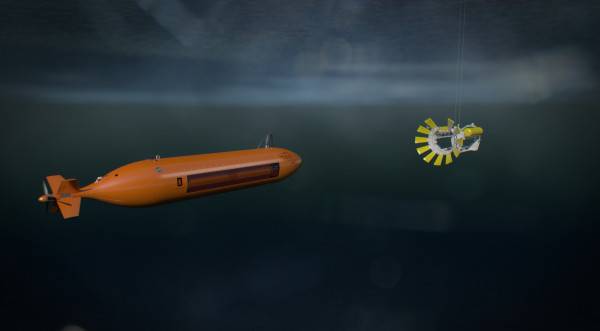 Norway's Kongsberg Maritime has developed a new LARS (Launch and Recovery System) solution for its HUGIN range of Autonomous Underwater Vehicles (AUVs), which it says will bring "a series of far-reaching operational improvements."

Kongsberg has decided to have the new LARS operating from midships, with the release and capture of HUGIN marine robots occurring beneath the sea surface.

"Launching and recovering AUVs underwater, away from the splash zone, lessens the possibility of their being damaged, while midships deployment averts any likelihood of AUVs being run over by the launch vessel," the company has explained.

Further, Kongsberg said that the new LARS’ subsea capabilities provide an extra benefit in that launch and recovery processes can be carried out in much higher sea states. This reduces the risk of weather damage to marine robots while boosting productivity to deliver significant cost savings.

The Norwegian company says that there are also tangible crew benefits.

"Operating the new LARS from midships will free up valuable aft deck space, and safety will be considerably enhanced as no personnel will be required to work over the stern in potentially challenging conditions," Kongsberg said.

The design allows AUVs to be deployed from a hangar or container, and multiple robots may be managed from a single LARS. It is flexible with regards to placement – although midships is optimal – and can be operated from anywhere onboard, including the stern. It may also be installed higher than on the main deck, to accommodate the vessel layout, Kongsberg says.

"For deployment and recovery, the LARS cradle is lowered into the water to a pre-determined depth. It is positioned safely below the splash zone and propeller wash, enhancing both the weather window and safety and is heave-compensated to stabilize the effect of waves and ship movement. Once in the water, HUGIN is released to start its mission. During recovery, the AUV finds its way home to the cradle using the onboard navigation system and a KONGSBERG MicroPAP located in the LARS. Once nearby, the HUGIN drives itself into the cradle and is locked in before it is lifted out of the water," Kongsberg explains.

"There is limitless scope in this new LARS design,” says Bjørn Gjelstad, Marine Robotics R&D manager, Kongsberg Maritime. “It could, of course, be installed on newbuilds which are being commissioned by naval forces, where it would aid the deployment of marine robots in the execution of duties ranging from subsea surveying and Search & Rescue to mine detection and clearance.

“It could also be installed into an AUV hangar on a platform supply vessel, facilitating a broad range of subsea tasks related to the offshore oil & gas infrastructure, or even retrofitted in a containerized solution. Coupling this new LARS with our highly maneuverable, stable, compact and customizable HUGIN AUVs, which utilize a modular payload system capable of accommodating a comprehensive variety of sensors, will transform commercial, oceanographic and military applications of all kinds.”