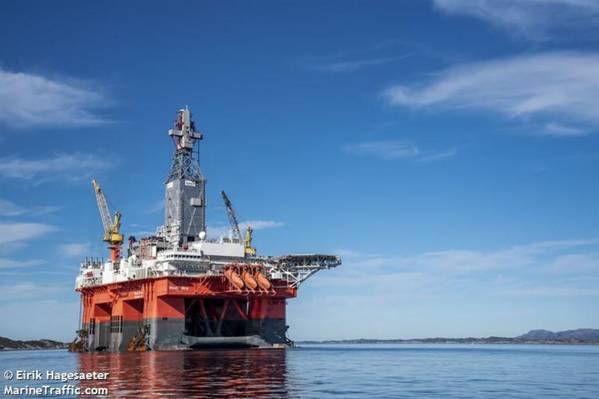 Offshore drilling company Seadrill was involved in an incident last weekend involving the unintentional disconnection of the lower marine riser package (LMRP) on its West Mira semi-submersible drilling rig. Also, a certain amount of oil-based drilling fluid was discharged into the sea.

The Norwegian offshore safety body Petroleum Safety Authority Norway said Tuesday it was investigating the incident that happened on March 14, while the rig was drilling a production well on the Maria field in the Norwegian Sea, where Wintershall Dea is the operator.

"While drilling was underway, the LMRP became disconnected from the blowout preventer (BOP). This resulted in the drill string being cut," the PSA Norway said.

No personal injuries were suffered from the incident, but the PSA has received information about a discharge of about 40 cubic meters of oil-based drilling fluid to the sea," the safety watchdog said, adding that the cause of the incident is so far unknown.

"The PSA takes a serious view of what happened. An investigation team drawn from its technical specialists will be starting work as quickly as possible. For the time being, their work will be conducted without traveling offshore," the safety regulator said.

During its investigation, the team will review and clarify the course of events, identify potential consequences and cause, and potentially utilize certain enforcement power to correct possible regulatory breaches. Once complete, the investigation results will be made public.

As per oilfield services company Schlumberger, lower marine riser package (LMRP) and the lower stack form sections of a subsea blowout preventer. The riser connects the rig to the LMRP, typically made up of an annular BOP, a control system and remotely activated valves designed to release gas from the riser. The LMRP connects to the lower BOP stack, which contains a minimum of four ram-type preventers and the choke and kill lines. (See illustration here).

Seadrill did not reply to OEDigital's email for further information on the incident.

The West Mira, delivered in 2019, is a 7th generation harsh-environment semi-submersible drilling rig. The rig has a firm contract with Wintershall until October 2021.

Worth noting, this is the second incident this month in the offshore drilling industry related to blowout preventer equipment.

Namely, offshore drilling company Valaris, last week accidentally dropped a Blowout Preventer Stack to the seafloor of Angola frrm one of its highest-earning drillships. The incident might cost the company the drilling contract with Total. Read more here.