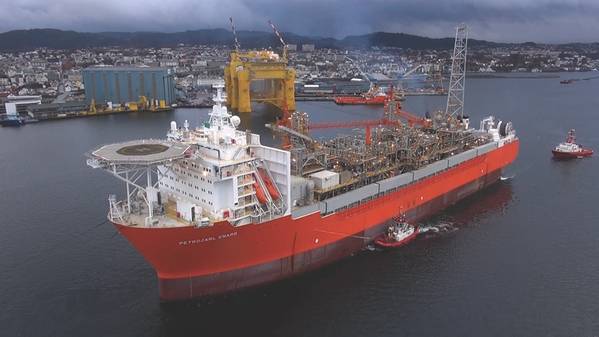 As New Year 2020 unfolds, there are 21 floating production, storage and offloading units (FPSO) on order, and unlike a year ago, these — and not floating liquefied natural gas (FLNG) — are the unheralded story. Driven by a decent price for oil, this buoyant market is kept strong by new players, new business models and the now solid realization that FPSOs can cost less than new, jacketed oilfield development. Most of all, nations are again asking industry to concentrate capital and rein in remote-area wealth.

The national oil companies (NOC) are back. In the World Energy Reports Forecast of Floating Production Systems, an industry authority, China’s and Brazil’s floaters figure prominently. The new year dawned with pronouncements in Rio (and in Beijing and other capitals).

“Petrobras announced a plan for 13 new FPSOs to enter service over the next five years, and said 13 aging floating production units will be retired over the same period,” says the WER forecast’s author, Jim McCaul. Long an industry consultant, he confirms that a Chinese group has also brought floating production finance to El Salvador in December and to Cyprus for 2020.

CNOOC, in fact, is placing three of its own floaters – the Hai Yang Shi You FPSO, a floating storage and offloading unit (FSO) of the same name and the Ligshui 17/2 semisubmersible – between 2020 and 2021. Lingshui 17-2 represents a NOC bringing technology to the fore, and letting it inspire a new business model for the South China Sea. Its newly procured riser pull-in system from Cargotech denotes the use of a semi-sub in typhoon-prone deepwater (up to 1,560 meters). “The Lingshui 17-2 gas field is CNOOC’s first own R&D deepwater project,” MacGregor VP of Offshore Solutions, Hoeye Hoeyesen affirms. The pull-in systems will clear the way for CNOOC (and partners Shell and Husky) to tap the northern part of Qiongdongnan Basin on the western continental shelf of the northern South China Sea.

CNOOC wasn’t the only “BRIC” champion letting technology inspire a business model. Petrobras, the forecast confirms, will use its own new Hi-Sep technology to lower the gas-to-oil ratio in the production riser of the Mero 3 FPSO. The who’s who of FPSO contractors – Bluewater, MISC, Modec, SBM, Teekay and Yinson – were made aware that Petrobras wanted to use its own new technology on the project in a first for NOCs. 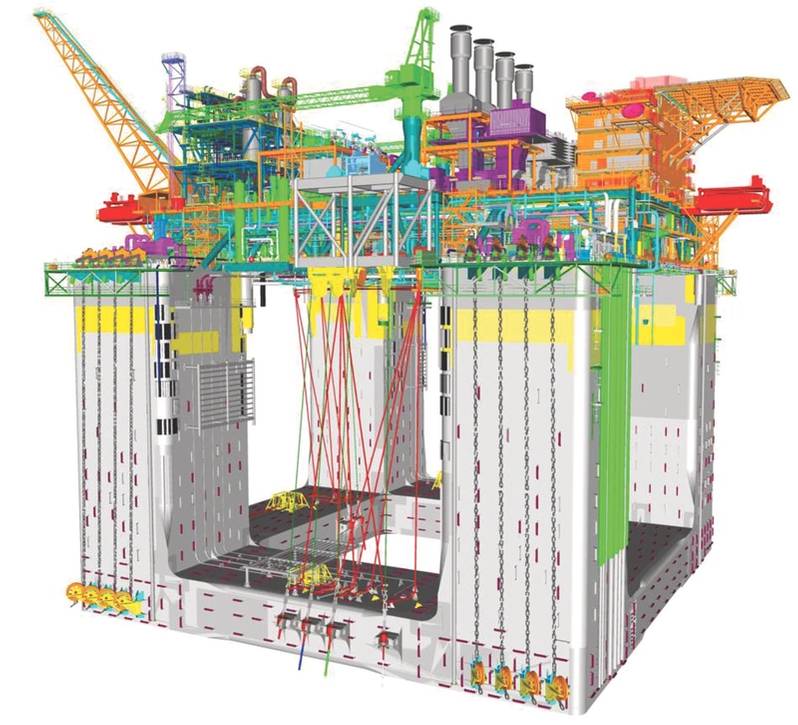 NOCs’ tech
As with CNOOC at Lingshui, the Petrobras plan is also to separate-out liquids from gas: Mero 3 is a former very large crude carrier (VLCC) that’ll produce up to 180,000 barrels of oil per day of oil (bpd); 420 million cubic feet per day of gas (MMscfd) and 250,000 bpd of water for injection. As WER reports, Petrobras intends to install four large FPSOs on Mero this decade.

CNOOC is also partner at Mero and now Petrobras is reportedly considering a floating gas hub “to collect and export (associate) gas to shore”, much like Lingshui. In all, Petrobras says it is spending $84 billion to 2023, including $68.8 billion on exploration and production. The Mero FPSOs are part of it.

McCaul says that 2020 will see a lot of FPSO activity, but South America – including Guayana, where ExxonMobil’s procurement kickoff for a fourth big FPSO is due – will see the lion’s share of contracting activity. “Most activity will be in Brazil where Petrobras is likely to initiate five large FPSO procurements over the next 12 to 18 months. Equinor will also likely initiate its Carcara project.”

While Australia saw 2019’s most complex floater launch (FLNG Prelude), McCaul says the Carcara FPSO seems to have the biggest complexity of contracts expected to be seen in 2020, at least in terms of near-term planning stages. “There’s nothing coming up that’s like the Prelude FLNG contract,” he adds.

Equinor paid $379 million for 10% more of Carcara’s BM-S-8 block in Brazil’s Santos basin, a plot it had owned as operator in mid-2018. Equinor and partners ExxonMobil and Galp need as much as of the Carcara area’s Block BM-S-8 and Carcará North as possible for the FPSO project to begin reining in the 2 billion boe said to be in-place. First oil is slotted for 2023/2024. 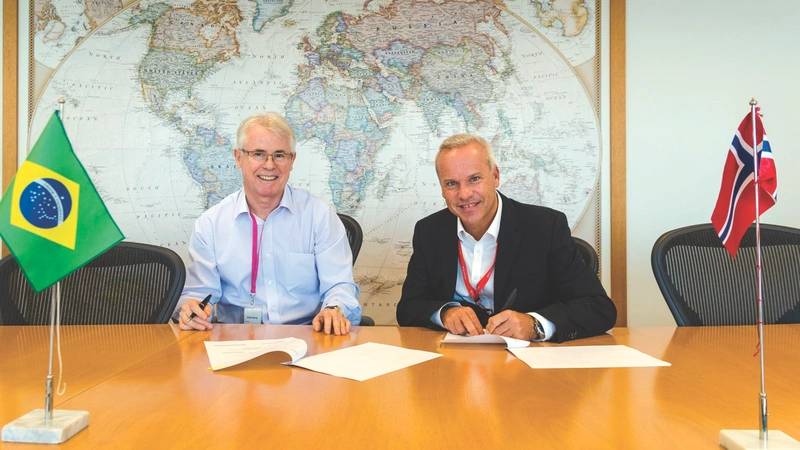 Tech alliances
On January 10, 2020, as we compiled this report, Tokyo-based FPSO-enabler, Modec, was announcing a building and technology alliance that will bring about Senegal’s first-ever FPSO.

NOC Petrosen (the Senegal National Oil Company) will join a partnership that includes Woodside’s African business, but it’ll be Modec supplying the FPSO for the Sangomar Field Development Phase 1 in the deepwater off Senegal.

“A FEED and an Asian yard” – once a criticism – is today a successful business model, with Modec awarded the front-end engineering design contract for the FPSO and now the FPSO purchase contract in the final investment decision (FID) for Sangomar. The FPSO will deploy 100 kilometers (km) south of Dakar, and is expected to be the country’s first offshore oil development. Scheduled for delivery in early 2023, the vessel will be moored in about 780 meters of water by an external turret mooring system supplied by Sofec, a Modec business. The FPSO will be capable of processing 100,000 bpd, 130 MMscfd of gas and 145,000 barrels of water injection per day, as well as storage for 1,300,000 barrels of crude.

“We consider West Africa – where numerous offshore oil and gas fields have been discovered in recent years – as one of our most important core regions, and this contract award should geographically reinforce our business portfolio,” Modec chief exec, Yuji Kozai, is quoted as saying. Modec has now operated three FPSOs in Ghana and Côte d’Ivoire and has supplied seven other floaters to Angola, Cameroon, Equatorial Guinea, Gabon and Nigeria.

Ultra-deep model
Sangomar is a nice recovery for Modec after a Mexican EPCI project saw the company write-down $73 million. “They got burned on their FPSO contract in Mexico,” notes McCaul, adding that other contractors could be hard-pressed to manage contract execution under local-content strictures.

Year 2019 started slowly for Modec, but in the final three months, its four-company, ultra-deepwater technology pact was being exported again en masse, this time to Brazil. A $36.5 million loss in September was eclipsed by year-end by full-year revenues of $2 billion. A deepwater business model was emerging based on “the four companies” – Modec, Mitsui & Co., MOL and Marubeni Corp. – purchasing and chartering FPSOs for named fields. By November 2019, new orders worth over $3 billion – as much as all its previous new orders of the past four years combined – had accrued. Finally, too, construction milestone payments were helping out.

Then, in November, the heads of the four companies agreed that the first three would invest in long-term FPSO chartering just like Modec was already doing for the Buzios field off Brazil. 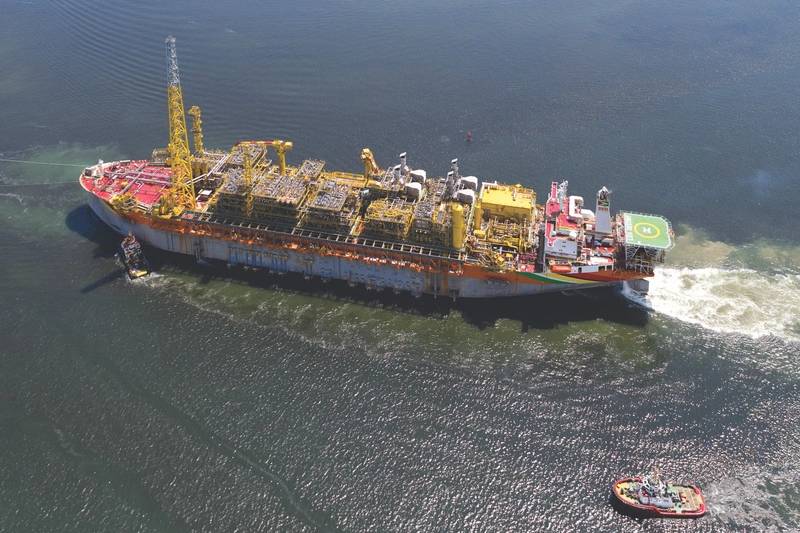 “The Norwegian model”
Tighter still, Mitsui, MOL and Marubeni are to invest in Buzios5 MV32, a Dutch company established by Modec. MV32 has entered into a 21-year charter agreement with Petrobras for the deployment of another FPSO. The deal mimics, to some extent, the convoluted pattern of Norwegian floater ownership, where a rig is the physical expression of a business entity named after it and absorbing all its risk.

The new-model, four-company FPSO will be named FPSO Almirante Barroso MV32 and will be deployed at the Búzios field in the giant pre-salt part of the Santos Basin, 180 km from Rio de Janeiro off the southeast coast of Brazil. The FPSO will be moored in 1,900 meters of water by year-end 2022. It’s the seventh time the four companies have collaborated to operate an FPSO in Brazil, but their chartering business now seems more focused and less risky.

FPSO Almirante Barroso will have enough capacity to produce 150,000 bpd from its relatively safe location in the South Atlantic’s doldrums. It will have gas production capacity of 212 MMscfd and storage of 1.4 million barrels to round out the project.

Revitalization or life-extension
Modec has also been contracted for the Petrobras Marlim revitalization project, part of that 13-FPSO Brazilian renewal McCaul identifies FPSO revitalization or renewal is code for field-development or life-extension. This new business model for Petrobras is in-line with what’s happening elsewhere, including the North Sea, where re-appraising an FPSO for longer life – via tieback or connection to jacketed infrastructure – makes for speedier, less expensive field development.

Brazil’s renewal, however, involves new FPSOs, and these are helping vindicate the market’s new business models, including SBM Offshore’s Fast4Ward hull program. SBM has historically kept yards in Singapore and the Middle East busy building hulls and production turrets. But Fast4Ward is a new business strategy. While you see it in the Japanese four-company model, SBM has been doing it awhile. Now, Chinese Shanghai Waigaoqiao Shipbuilding and Offshore and China Merchants Industry Holdings have started building SBM Offshore’s first three hulls earmarked for fields. 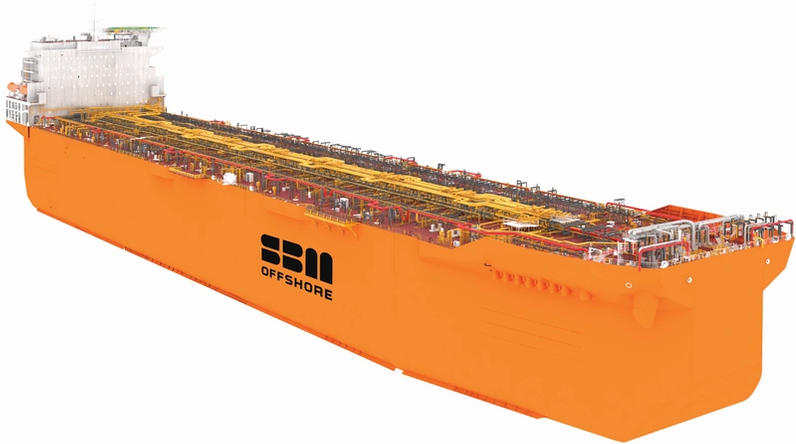 Those hulls highlight, too, the FPSO company, or per-vessel JV entity. In mid-December, SBM shed 35% of its shares in the FPSO Sepetiba to make room for Mitsubishi Corp. and Nippon Kavushiki Kaisha. “Special purpose companies related to the lease and operation of FPSO Sepetiba” means all parties will occasionally visit Amsterdam.

In this way, however, Petrobras gets another Mero field FPSO, with MC, NYK and SBM Offshore along in low-risk companies. FPSO Sepetiba is due out in 2022.

New players
And there may be new players. “What makes the coming year unique is the question of whether the primary FPSO contractors will have the interest to bid realistically for these contracts, given their current backlog,” says McCaul. That could mean more write-downs, new business models and the spreading of more risk.

Teekay Offshore, for one, is outwardly wanting to sell FPSOs while building shuttle tankers and upgrading its FPSO fleet. When we check in, Teekay is hiring nine new staff – in Trondheim – where it’ll also be bringing in Canadian white-collar people.

Chris Brett, Teekay Offshore Production president, tells Offshore Engineer, “Teekay Offshore is strengthening the organization with key FPSO core competence roles to deliver on our future strategy and ambition.” He says the Canadians will help the company “operate on a standalone basis”. So, another FPSO business model might yet emerge out of Norway.