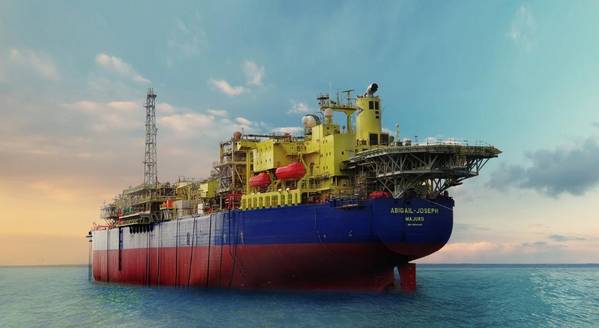 Malaysian FPSO leasing company Yinson has informed that its FPSO Abigail-Joseph has set sail from Singapore to Nigeria, where it will be deployed at First E&P offshore oil fields.

The FPSO, previously named Allan, has recently been upgraded by Keppel in Singapore, in what the shipyard said was "the world’s fastest brownfield FPSO modification and upgrading project."

Keppel Shipyard's scope of work included refurbishment and life extension works, fabrication and installation of a new riser balcony, spread mooring system and helideck, as well as modification of the FPSO's topsides and marine systems.

According to Yinson, the FPSO is expected to reach Nigeria in May, where it will be moored over the Anyala & Madu fields in Block OML 83 & 85.

"The vessel is expected to reach Nigeria by early May after which she will undergo final commissioning works. Start-up of production is scheduled for end May 2020," Yinson said Friday.

The vessel has been chartered by FIRST Exploration and Petroleum Development Company Ltd on a firm seven-year contract with options to extend. The firm part of the contract agreed last year carries a value of $901.79 million.

The FPSO was previously deployed in Gabon at the Olowi field.