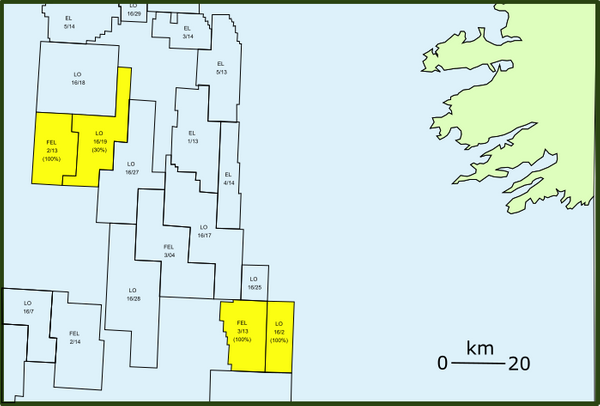 Image by Europa Oil and Gas

In a statement on Wednesday Europa said that the decision to drop the license followed the completion of the agreed work program, including a full technical assessment, "which concluded that the prospectivity of LO 16/19 is limited."

Europa estimates that relinquishment will result in the avoidance of full-year costs of £105,000, based on Europa assuming 100% ownership and converting the LO into a Frontier Exploration Licence (‘FEL’).

Simon Oddie, Interim Chief Executive Officer and Executive Chairman of Europa said: “Today’s relinquishment of LO 16/19 provides a worked example of how our low cost/low-risk exploration model works in practice: acquire acreage at an early stage; identify and work up the technical case of leads; attract partners to fund further de-risking of prospectivity; and, based on the results, elect to drill or drop. In LO 16/19’s case, the decision has been taken by both partners to relinquish the acreage.

Combined these licenses have the potential to host gross mean un-risked prospective resources of 5.7 billion barrels oil equivalent in addition to the 1.5 tcf gas assigned to Europa’s flagship Inishkea prospect on FEL 4/19 in the Slyne Basin, Europa said.

Inishkea - where Europa is seeking a farm-in partner - lies close to the 1tcf producing Corrib gas field and associated infrastructure, and has an estimated geological chance of success of one in three and is viewed as “infrastructure-led” exploration, Europa said.