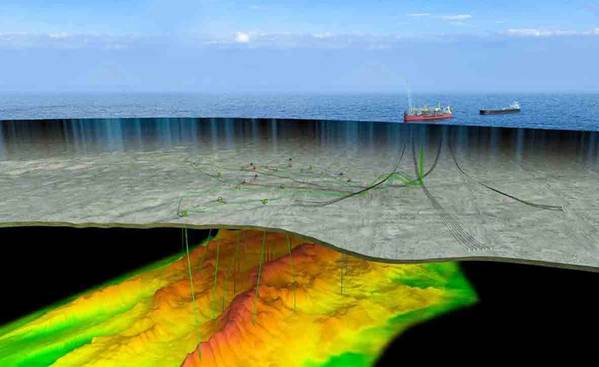 Subsea Integration Alliance, a JV between Subsea 7 and OneSubsea, has been awarded an exclusive contract by Equinor for the Front End Engineering Design (FEED) study for the SURF (Subsea, Umbilical, Risers and Flowlines) on its Bacalhau (formerly Carcará) project, offshore Brazil.

The awarded work is required to finalize the technical definition of the proposed field development prior to Equinor making final investment decisions (FID) late 2020.

The Bacalhau field is located 185 km from the coast of the State of São Paulo, in water depths of 2050 meters. It will Bacalhau (Carcará) will be the first greenfield development in the pre-salt by an international operator.

Subsea 7 said Thursday that the contract was based on a two-step award. The FEED and pre-investment are starting now, with an option for the execution phase under a lump-sum turnkey set-up which includes engineering, procurement, construction and installation for the entire SURF and SPS scope.

The development will include 19 wells, approximately 130 km of rigid risers and flowlines and 35 km of umbilicals.

Furthermore, Subsea Integration Alliance will be responsible for the subsequent life of field support. The value of the EPCI contract will only be recognized by Subsea 7 in its order backlog after FID and will represent a major project award. Subsea 7 defines a major contract as being over USD 750 million.

Offshore installation activities are scheduled for 2022 and 2023. Bacalhau is Brazil’s first-ever integrated SPS and SURF project.

Apart from the Subsea Integration Alliance deal, Equinor has signed an agreement with Japan's Modec for the supply of an FPSO for the Bacalhau field. The FPSO will be Brazil's largest ever.

“Bacalhau is a world-class asset in the Brazilian pre-salt Santos area. Brazil is a core growth area for Equinor, and the company has ambitions of producing 300 to 500 thousand barrels a day in Brazil within 2030. Bacalhau will be an important contributor to reach this goal,” says Margareth Øvrum, Equinor’s executive vice president, Development and Production Brazil.