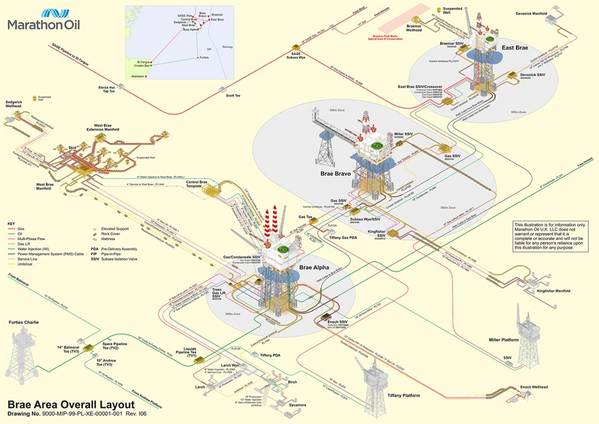 UAE-based oil company TAQA is set to take over operatorship over the Brae oil field in the UK sector of the North Sea from RockRose Energy.

RockRose energy got hold of the licenses containing the Brae field last year, following the completion of the UK North Sea assets of the U.S. company Marathon Oil for $95 million.

Marathon at the time held interests of 26.0% in license P313 and 40.0% in licenses P340 and P108, which together comprise the Greater Brae Area which lies some 220 kilometers north-east of Aberdeen in a water depth of approximately 110 meters.

In a statement on Friday, RockRose Energy said it would be passing operatorship of the Brae Area to TAQA Bratani, subject to the approval by the Secretary of State.

RockRose explained that the move followed court proceedings brought by TAQA and the other joint venture partners, JX Nippon and Spirit Energy in December 2019.

No consequences for RockRose

"The proceedings related to the notice of discharge served on Marathon Oil UK (MOUK), as an operator. There is no strategic or financial consequence to RockRose, as no partner under a Joint Operating Agreement (JOA) can benefit from being operator," RocKrose said.

RockRose added: "The notice of discharge was served on MOUK prior to its acquisition by RockRose on 1st July 2019 and the possibility of this outcome was referred to in the prospectus published by the Company on 19th July 2019. Throughout the process, subsequent to the notice having been received, RockRose has remained committed to ensuring the best possible outcome for the Brae Area, its staff, and for the joint venture partners."

The company also said it would work with TAQA during the transition process to ensure there is no disruption to ongoing operations including the current drilling program at West Brae), and to make sure staff is "fully supported throughout."

"We expect the handover to be completed in the second of half of the year," RockRose said.

RockRose has said that, since the completion of the Marathon transaction, it has made "a material positive impact" in the Brae Area, both for the staff and the assets.

The company has highlighted that, together with JV partners, it has extended the life of the Brae Alpha field by at least three years to 2030, and the East Brae by two years to 2023. It also said that the Brae Bravo asset was successfully disembarked "and the knowledge gained from that exercise has materially benefitted other assets in which RockRose is a partner." Brae Bravo was platform removal is scheduled for 2021.

Furthermore, when it comes to staff, the company has said that "the working environment has improved with the implementation of a rota change offshore and restructuring of the operational leadership."

In a separate statement, TAQA said it was in the process of discussing arrangements to transition operatorship "with the intention to have this completed during 2020."

“We welcome RockRose’s comments that they ‘will work with TAQA during the transition process to ensure there is no disruption to ongoing operations (including the current drilling program at West Brae), and to ensure staff are fully supported throughout.’

“Operational activities will continue unaffected while the transition is undertaken.

“The safe and successful operation of the Brae fields remains TAQA’s primary aim and we look forward to working collaboratively together with the joint venture, relevant regulatory bodies, contractors and other stakeholders to manage a safe transition of Brae Area operatorship.”