Equinor Gets Another Approval for Australia Drilling 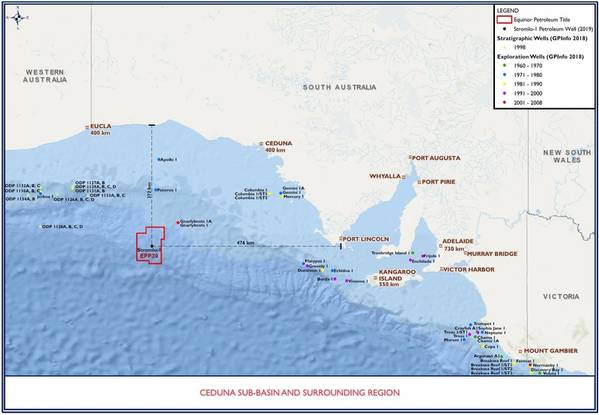 The proposed location of the Stromlo-1 well and all the existing wells in the region (Image: Equinor)

Norwegian energy company Equinor has received the second of four approvals needed for offshore exploration in the Great Australian Bight.

The first approval was granted in 2011 when the National Offshore Petroleum Titles Administrator and the Ministerial Joint Authority, comprising federal and state government resources ministers, granted an exploration title for activity in the Bight.

Under Commonwealth legislation, energy companies must have a petroleum title, an accepted environment plan, well operations management plan and activity safety case before they can undertake any offshore oil and gas activity.

Through the iterative assessment process under the environmental regulations, Equinor modified and re-submitted its Environment Plan twice, responding to NOPSEMA’s requests for additional information.

The Environment Plan was also subject to public review and comment, with NOPSEMA and Equinor reviewing more than 30,000 submissions and taking into account all relevant information provided.

NOPSEMA said it has imposed stringent conditions on its approval to ensure a high level of protection to the environment, in recognition of the region’s unique values and sensitivities.

In the event Equinor secures all approvals, it will be subject to NOPSEMA’s inspection and compliance regime. Failure to comply with the environment plan will result in enforcement action.

Since 2011, the Australian Government has awarded 11 exploration permits in the Ceduna sub-basin. Each permit has minimum work requirements (e.g. seismic surveys and drilling) that operators must complete to comply with the permit conditions. Equinor is the operator of two of these permits and plans to drill one exploration well, Stromlo-1, which is in line with the conditions of the permit as determined by the Australian and South Australian governments.