A Future for Floating Wind 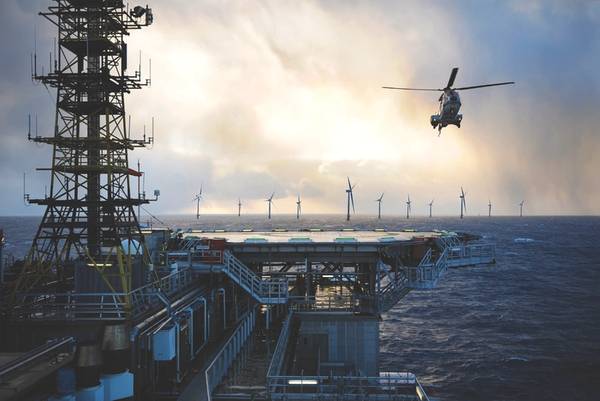 With more demonstrators in the water, more substantial players are taking interest in floating offshore wind.

For some time, floating offshore wind has been something of a niche, but now full-scale demonstrators are in the works, and bigger players – including oil and gas companies – are taking note.

Erik Rijkers, Director – Market Development & Strategy, at Houston-based firm Quest Floating Wind Energy, says, “No doubt the entry of oil and gas players as developers/partners in floating offshore wind projects has opened a few eyes to the acceleration of this industry. Equinor now successfully operates the Hywind Scotland wind park and is planning to apply the concept to reduce the carbon footprint of its oil and gas operations in Norway, and it looks set to be followed by Aker BP.”

Equinor’s Hywind Tampen project envisions the use of 11 floating wind turbines to provide power to the Snorre and Gullfaks oil and gas production facilities in the Norwegian sector of the North Sea. 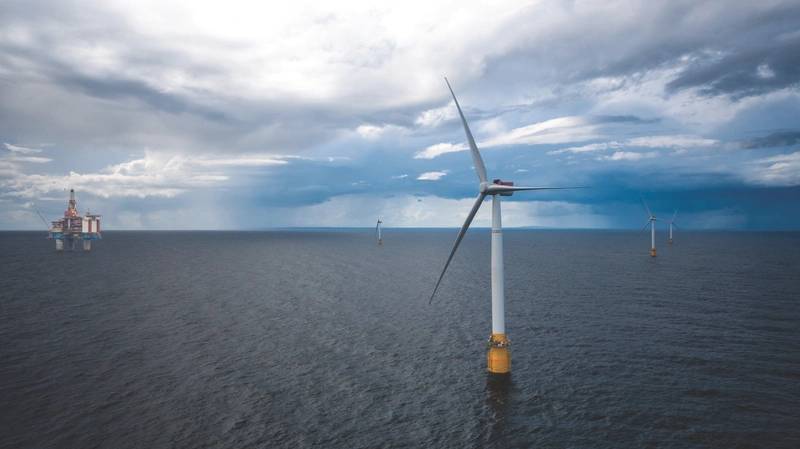 Equinor’s Hywind Tampen project envisions the use of 11 floating wind turbines to provide power to the Snorre and Gullfaks oil and gas production facilities. (Image: Equinor)

The floater designs
A number of designs have been out in the water for more than one year. Earliest off the mark was Equinor, with its Hywind spar concept. A scale prototype was tested offshore Norway before Equinor opened Hywind Scotland, a 30MW floating wind farm, off Peterhead, Scotland, in 2017.

PPI’s WindFloat semisub has also seen service offshore Portugal and is now being used at Kincardine Offshore Windfarm Limited’s site near Aberdeen, Scotland. The company, which is majority owned by Spanish construction company Cobra Wind International, has planning consent to build out the site to a 50MW farm using 8MW turbines on PPI’s WindFloat design.

Eolfi’s Groix and Belle-île floating turbine pilot project expects to see four 6MW turbines installed using foundations designed by France’s Naval Energies, which can be built in in concrete, steel or a steel/concrete hybrid combination. This will be fixed to the seabed by an anchoring system that controls its movements, according to Naval Energies.

Stiesdal’s Tetrafloat and the twin turbine Hexicon will close the ranks on the first-generation concepts that Rijkers expects to be dominant in the market out to 2022-25. A range of alternative floaters are also in various stages of development (France’s Eolink, with a single point moored, four column floater; Spain’s Saitec Offshore Technology’s SATH technology, consisting of two connected cylindrical and horizontal hulls; Sweden’s SeaTwirl, with a vertical axis turbine; and Italian firm Saipem’s Hexafloat, which uses a counterweight beneath the floating substructure). Weights of these systems range from 410 metric tons per megawatt (T/MW) for a steel semisub to some 1,110T/MW for a concrete semi.

With projects in the water, larger developers and financiers are coming in and on a global scale, says Rijkers, citing EDPR, Eolfi, Copenhagen Investment Partners and Macquarie). “Equinor and PPI are (with various development partners) for now the main players in the US West Coast projects, as well as in Hawaii,” he says. “While all developers and designers are eying opportunities in Asia (Eolfi/Cobra are a prime candidate in Taiwan), as well as in the recently announced 1.7 gigawatts (GW) projects in South Korea. This is also true in Europe, where Scotland is developing new rounds that will include floating wind, as well as France, which is modest, for now, but Quadran Energies Marines (behind the EolMed project) and Eolfi have already announced pre-development of the full-scale commercial follow-up of their French demonstrators. For example, Eolfi is looking at projects with a capacity of 3GW in the Gulf of Lion and 1.5GW offshore Brittany.”

Looking ahead
While the outlook for offshore wind is generally expressed in total MW capacity, the number of floaters is considered more relevant, currently, to show the opportunity in the market, says Rijkers. “There are currently 50 floating units in projects under development out to 2022, worldwide, but this number will increase to 300 floating wind turbines by 2025 and possibly well over 1,500 by 2030, a fivefold increase,” he says. “Furthermore, turbine capacities are evolving; MHI Vestas now has up to 9.5 MW turbines and GE has a 12 MW design.”

Key is cost. Floating turbine unit average capital expenditure will gradually reduce from some $40 million in 2022 to $33 million in 2030, says Rijkers, but this cost reduction has a lot more potential once the full market for floaters levels out. He expects it will eventually go well below $25 million, depending on turbine and cable costs.

That doesn’t mean there aren’t headwinds. Over the last 18 months, Quest FWE had to remove or set back the date for 20% of the projects it tracks, most of which were demonstrators that proved too hard to finance. “There is considerable interest from the financial community, however,” he adds, “and it is believed that with each project coming online successfully, and the more operational feedback that is received, the risk and therefore financing thresholds on floating projects will alleviate.”

Fixed bottom wind and floating wind
While fixed bottom wind projects are reaching the water depths where some floating systems could be deployed from 30 meters of water, beyond some 60 meters floating would have a distinct advantage, says Rijkers. “On the US North East coast, the prevailing seabed and soil conditions may not be always suitable for fixed bottom concepts and pile driving falls into an expensive ‘operational’ window due to environmental constraints,” says Rijkers. “Floating wind solutions may well show to have the advantage both technically and economically in such waters.

“New solutions such as mono buckets, a monopile with a suction device attached, are also being developed, but, until these have been proven to deal with the presence of large boulders, developers might be interested in considering floating alternatives in their concept engineering and front-end engineering and design.” 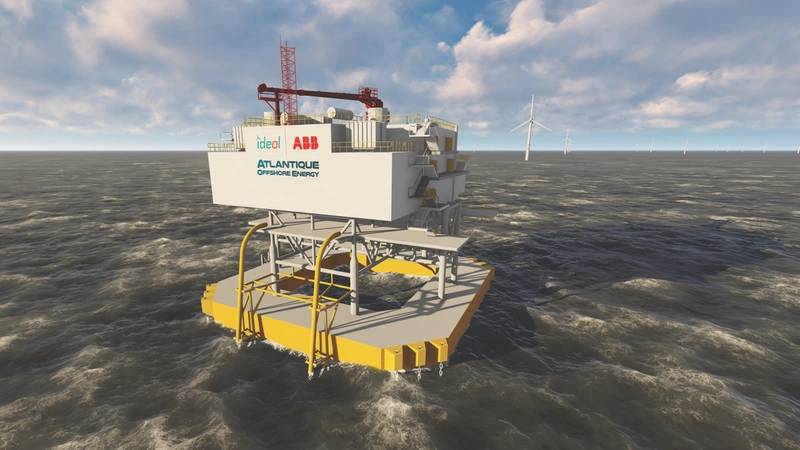 The idea is being developed under a research and development project called OPTIFLOT, which also involves French industrial processes firm SNEF, and is based on Ideol’s damping pool concept.

“We see the interest growing very fast to scaling up floating offshore wind,” says Alfredo Parres, ABB Power Grid Division, Market Development Manager, Renewables. “We know floating offshore wind has been on the drawing board and there have been some pilots. The main focus has been the design of the floater for the turbine. That was the first step, to demonstrate you can install a turbine on a floating structure and that it can work. Now we have a few of those operating and that’s pushed developers to look to what happens if you go full scale, to 500MW-1GW. As you get there you have to think about the substation.”

Parres expects large scale projects to be built out from 2030. By then, there are some key elements to be worked through. One is industrialization and standardization, another is making the mechanical structure operational in the floating offshore environment, he says. “Once these are addressed, the second biggest challenge is the cable (which will have to connect to the floating substation and endure the dynamic loads it will be subjected to). We see a lot of work being done on these.”

In the UK, for example, the Carbon Trust has a project looking at dynamic offshore cables. “Dynamic cables are already used in the offshore industry now, but this will require a higher voltage, and that’s more challenging,” Parres says. “The level of development is lower than other aspects, but still you need to make sure equipment design, specification and standards are there. And the standards are not yet fully designed. Standards are important to streamline the industry.” This will cut the power grid equipment, from transformers to breakers.

“Then we work on the footprint, the size and weight,” adds Parres. “Weight and size are ken and how they are put together in a smart way so that all the system design is most efficient. Digitalization will play its role. We have started already in the digital, but much more could be done. The digital substation concept could reduce the amount of copper needed to transfer signals to the control room, could help in terms of maintainability, and reduce the footprint of the substation.

Parres is confident the solution will be viable. “Offshore platforms will not be the show stopper here,” he says. “The biggest part is the turbine development and the cable will have to step up. But, moving toward full scale substations, I don’t think will be the main challenge.”