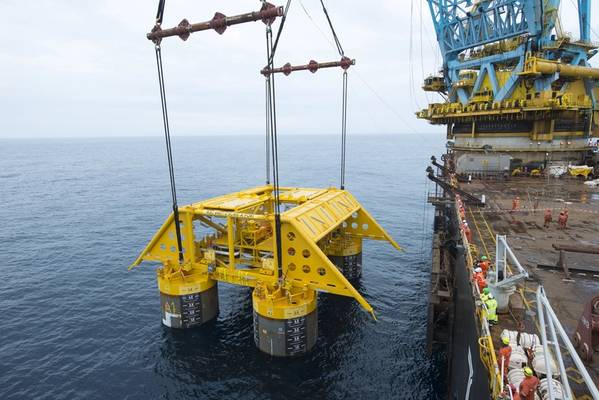 Complex macro-economic scenarios, electric vehicle growth and the value – and meaning – of digitalization were among the wide-ranging topics tackled during Day 0 at this year’s Underwater Technology Conference (UTC) in Bergen.

However, demand is expected to remain for some time and with break-evens for offshore now trending below shale, there’s been an increase in offshore capital investment – the increase ini five years, in fact.

The average break-even for shale is now $40-45/barrel, says Martinsen. Wood Mackenzie’s latest estimates put offshore at $35/barrel. Equinor says 60% of its non-sanctioned portfolio is below $40/barrel. These metrics have seen subsea Xmas tree orders rise and should tip over 300 this year, he says.

But, says Martinsen, “We have to keep a laser focus on cost because the shale guys are just north of us (in break-even prices). We are seeing the effect of economics. We have had four years of capex coming down offshore. In 2019, we have increasing capex for the first time in five years, while in shale we expect capex to be down 10% year on year in 2019.

“The offshore outlook is much better today. We have fought back on shale, but the oil price is going to be volatile still. The key uncertainties are trade wars which could push oil prices down to $60/barrel. But in DNB we believe oil demand will continue to improve and to get the barrels that we need to plug the gap we need prices above $70/barrel for Brent.”

Focussing on tiebacks
Oil companies are looking for projects with low upfront capex and short period from capex to production, Erik Simonsen, from IHS Markit, said.

“Shale is an obvious answer; the only investment is drilling wells and drilling to production is less than six months,” he says. “That’s meant large greenfield projects in new areas with long pay back are less popular. Tie backs are more popular, using existing hubs. They’re popular in the North Sea and we’re seeing them increase in popularity.”

Offshore spending has fallen over the last five years, and by 5% in 2018, Simonsen says. However, subsea spending increased 27% that year, he says, having hit “rock bottom” in 2016, but then having also seen growth in 2017. Over the next five years, Simonsen says 5% growth is expected per annum.

Regionally, growth is expected to be highest in South Africa, followed by South America. “We’re actually seeing a decline in Europe in the years to come,” says Simonsen. Here, he puts the growth (decline) rates for the four segments at -7% for SPS, -8% for pipelay, and -2% for heavy lift, although OSV/ROV services are expected to increase 12%. The problem, he says, is that we’ve just come through the Johan Sverdrup project, and the Nordstream pipeline project, which had boosted previous years’ numbers.

Innovation across nations
Stephen Sheal, external relationship director at The Oil & Gas Technology Center (OGTC), based in Aberdeen, said Norway and the UK should do more to work together to help drive greater innovation. “Arguably there’s never been a greater need for innovation than now. But are we good at doing it? Are we fit to survive the next challenge?”

Sheal says Calgary and Houston are among the top innovation hubs in the world, yet Aberdeen and Bergen aren’t even in the top 500. “Why? Sweden has more Unicorn companies than anyone else outside Silicon Valley,” he says and highlights national investment in R&D by different countries, such as 3.3% in Sweden and 4.4% in Israel. 2.4% is considered good. It’s 1.7% in the UK and 2% in Norway, he says. While £241 million ($307 million) has been spent in developing and deploying new technologies in the UK, a lot due to projects with OGTC, has helped, but 80% of the investment came from just 20% of operators, he says.

“We need to think differently about how we do research and development, to think about the Norwegian continental shelf and UK continental shelf as one. To coordinate our efforts. It’s not going to be organic, we cannot just say we will collaborate and it will happen. We have to have intent.”

Moving towards subsea electric
Some are large enough to push forward with their own innovation. Per Arne Nilsen, head of subsea technology at Total E&P, says his firm is targeting moving over to electrified subsea assets over the next few years. But, he says but keeping costs in check isn’t just about new technology.

“As a business (and industry) we have a challenge as we have to be more competitive,” he said. Total’s efforts have included halving well costs over time – drilling two wells for the cost of one – focus on operating assets efficiency for availability and standardization and collaboration, including using standard trees, resulting in a 10-month delivery schedule for a recent project in the Caspian.

“You don’t need to be so innovative in some of the things we do, like Xmas trees and manifolds,” he says. “Some of these things are very conventional and we should be more efficient in what we do.”

A large focus for Total is on deepwater and for here it’s also looking at unmanned facilities, subsea-to shore, which is being studied for its South African operations, subsea injection and electrification, says Nilsen. “The global picture is that our subsea assets will be electrified over the next few years,” he said.

“We have a digital road map for subsea with more efficient tools for field design that’ve proved quite efficient,” he adds. “We have catalogs of standard equipment that we feed into these systems and quickly see layout.

“We have collaboration tools, real time data, quality monitoring, and looking at robots, additive printing to print spares when they are needed. All of that feeds into the digital twin.”

Summarizing, Nilsen says, “We continue to believe in subsea. Our current exploration portfolio has a lot of deep water. We are due to drill an exploration well soon in 3,900 meters of water, so we need 4,000-meter capability. We need to be innovative in technology, methods and processes.”