Boosting Oil Recovery in the Gulf of Thailand

By Isma Mohd Ismail from Tendeka and Muhammad Triandi, Ikenna Chigbo and Thanudcha Khunmek from Mubadala Petroleum May 13, 2019 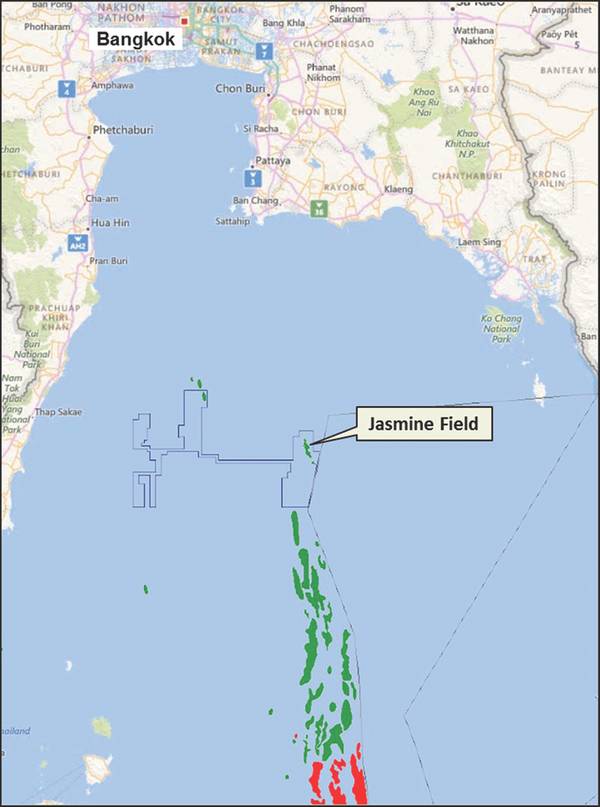 Figure 1 The Jasmine field name is commonly used to represent both the Jasmine and Ben Yen Fields in the B5/27 Block (Image: Tendeka)

The Jasmine field, operated by Mubadala Petroleum, is located 200 kilometers south of Bangkok. This field has a sandstone reservoir and is highly complex and compartmentalized. Many good sands have a thickness of about 30 feet to 40 feet, reservoir pressure is supported by a strong aquifer, and most wells have high productivity.

The field has been producing since 2005 and reached a cumulative production of 70 million stock tank barrels (MMSTB) from five platforms in 2018. The very early wells were initially drilled with vertical or deviated trajectories without any artificial lift in the crestal areas. They were later drilled as horizontal wells or multizone completions with electrical submersible pumps (ESP) as the artificial lift.

In the particular fault block of interest, a large gas cap above and below the water was present, which is normally not apparent in other fault blocks. This reduces the oil sand thickness to about 20 feet as shown in figure 2 and poses a significant risk of free gas production, particularly in this undeveloped reservoir where the degree of aquifer support is unproven.

Too much gas production can lead to gas lock problems for the ESP, causing pump or motor failure, and could potentially render the well inoperable. In the last five years, five wells have been shut-in due to ESP failure, with an average of 10 months to remediate. Although recent completion modifications have improved gas tolerance in ESP wells, the risk of gas production becomes higher when you target a thin oil rim, as the gas will tend to have early breakthrough at the heel section. This has limited the development of thin oil rims in the Jasmine field. Therefore, Autonomous Inflow Control Device (AICD) sand screens were examined to restrict some of the produced gas and water.

Increasing oil production with AICD completions
The AICD is an active flow control tool that delivers a variable flow restriction in response to the properties (viscosity) of the fluid flowing through it and works on the principle of a levitating disk[1]. When gas or water flows through the AICD valve, the velocity of the water and gas will increase, hence reduce the dynamic pressure and levitate the disk toward the inlet to choke the flow. The flow path through the device is marked by arrows (figure 3). The AICD valve is assembled as part of the sand screen joint (figure 4). The flow path from the reservoir is marked by arrows. The reservoir fluids enter the completion through the sand screen filter and flows into the inflow control housing where the AICD is mounted. The fluids then flow through the AICD and into the production stream and flows to surface together with the production from the rest of the screens. Swell packers are also installed along the open-hole section to isolate the water/gas bearing zone and to provide zonal compartmentalization to the production zone. Spacing between the packers were 100 to 150 feet. 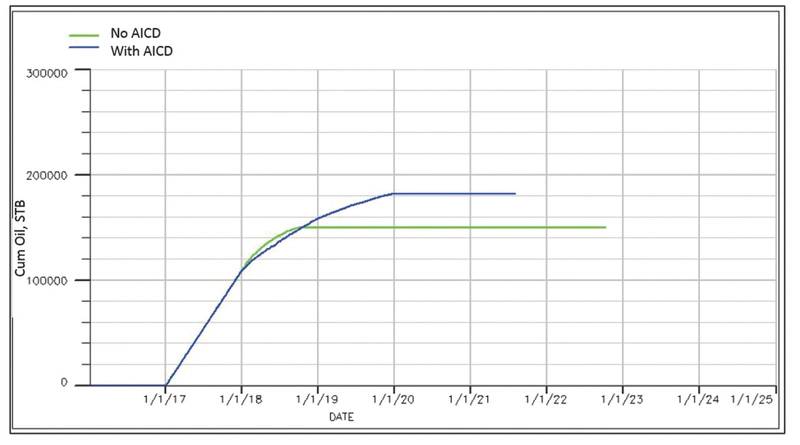 Controlling gas production
One of the key issues is relatively thin oil rims in the placement of the well. With the AICD technology, the wellbore trajectory inside the sandstone has been moved slightly higher in new wells to move away from the water zone and located 10 feet below the gas-oil contact. Although this will bring the wellbore closer to the gas cap, the AICD valves will be choking the gas if conning and minimize the risk of gas breakthrough in this 2,000-foot horizontal well.

Incremental volume evaluation
The incremental recoverable oil volume resulting from using an AICD completion is investigated though dynamic reservoir simulation as shown in figure 5. In this case, the success of the completion was evaluated by comparing production performance to the existing nearby well in the same block. The difference of cumulative volume is the potential gain realized by using devices in the horizontal well. In addition to predicting cumulative production, the gas-oil-ratio (GOR) of the AICD completion is also investigated to determine if the gas breakthrough is controlled sufficiently to prevent ESP problems. The forecast GOR is valuable input for designing the well ESP. The potential cumulative difference is approximately 15% incremental as per simulation result in figure 5. The analysis demonstrates that GOR can be controlled and constant throughout the well life. The incremental AICD completion cost adds 12% to the total well cost. 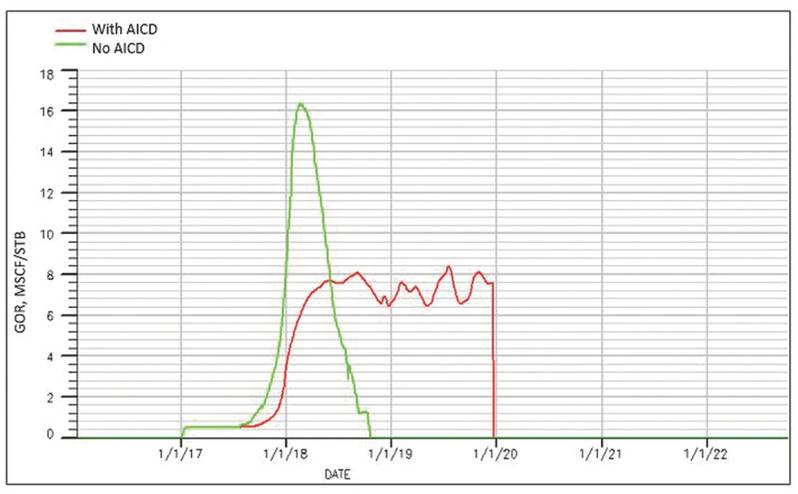 Production performance
The AICD well completion has been successfully implemented as a pilot project in horizontal wells at the Jasmine and Ban Yen fields to reduce gas breakthrough. Post AICD implementation, the AICD well has shown reduction in GOR compared to the adjacent well. The initial production rate for the AICD well is 430 barrels of oil per day (BOPD) with 0% water cut. After more than six months, the gas production was less than 1 million standard cubic feet per day (MMSCFD) with GOR of 2 million standard cubic feet/stock tank barrel (MSCF/STB). Comparing the adjacent well, the AICD well oil production has increased from 190 BOPD to 430 BOPD, a rise of 126% more oil production. This is due to the reduced GOR from 17.5 MSCF/STB to 2 MSCF/STB, a decrease by a factor of eight.

With the achieved success of this project, similar thin oil rim opportunities are now being investigated in the Jasmine field. The AICD well has now been producing for more than one year and is currently producing as expected at low GOR levels.