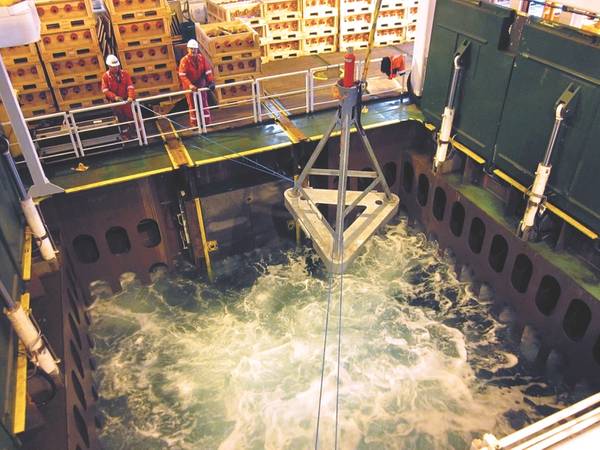 In the recent downturn, one of the measures oil companies took to sustain production was to focus more on improved oil recovery (IOR) programs at existing fields rather than exploring new frontiers.

Proactive management of existing reservoirs to maximize recovery, without the need for major upfront capital investment that developing new fields requires, was and remains a profitable way to get more product out of the ground, using less resource and reduced environmental impact. Yet, with IOR comes additional risks including fault-reactivation and other geohazards, such as seabed fractures, deformation or subsidence. Seabed movement is often to be expected above reservoirs as they are produced and pressure levels fall. Several centimeters of movement a year is quite typical. As pressure levels in a production zone reduce, so does the ability of the reservoir rock to support the rock layers or overburden above it, leading to seafloor deformation phenomena such as a gradually increasing subsidence bowl.

While this movement might not cause a major hazard in itself, knowing how much movement there is, in what direction and how fast it’s happening helps operators to learn more about how their reservoirs are performing, and therefore how to operate them more productively.

The ability to measure seafloor movement laterally and vertically over time enables geophysicists to fuse this information with other production data to infer fluid flow, pore pressure, reservoir level compaction, etc., and then tune their reservoir management plans and improve recovery rates accordingly. During drilling and production activity, seafloor monitoring can also help to avoid geohazards, such as fault reactivation and mud slips. 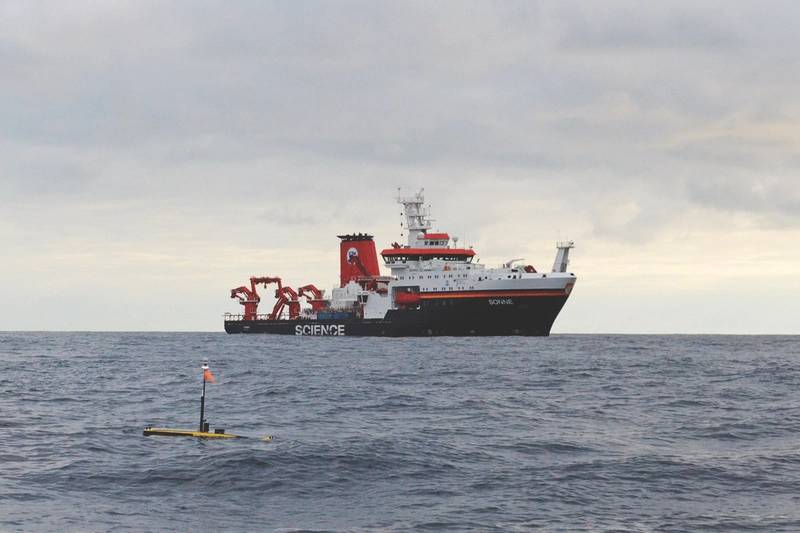 What works onshore, doesn’t work offshore
However, in the past, it hasn’t been easy to measure these small movements offshore. Onshore, GPS positioning, laser ranging and satellite altimetry systems can be used to determine the positions of, and distances between, objects on land to within centimeters or even millimeters. These techniques don’t work subsea.

Traditionally, bathymetric sonars have been used to measure subsidence offshore, but their precision is severely limited, particularly in deep water, and the deployment logistics involved hinders their practical application for detecting slow subsidence rates, where long duration measurements are required. Portable gravimeters are also used to detect changes in density brought about by water replacing gas for example. But, these sensors have to be moved between permanently deployed seafloor monuments using a remote operated underwater vehicle (ROV), and repeated gravity and pressure measurements taken at each location. It’s a lengthy, personnel, asset-intensive and therefore costly process and is only usually undertaken at multi-year intervals, which limits the usefulness of the data.

Over the last decade, a more cost-effective alternative has been developed, thanks to an idea Shell research geophysicists Dr. Paul Hatchell and Dr. Stephen Bourne had in 2006. They were aware that, because seabed deformation causes vertical and horizontal displacements, a more continuous method of monitoring subsidence could be possible by taking vertical and horizontal measurements using long-term deployed subsea instrumentation. At the time, suitable long-endurance and highly sensitive monitoring equipment was not available, so Shell approached Sonardyne, because of our long history in high-precision instrumentation design.

To measure horizontal displacement, acoustic waves are transmitted as signals between pairs of our Autonomous Monitoring Transponders (AMT), which are separated by hundreds of meters, and two-way round trip time of those signals is determined. The wave speed is also measured locally and in real time using integrated sound velocity sensors, so that the distance between AMT pairs can be monitored very accurately. Vertical displacement is measured using integral pressure sensors. By comparing the results from multiple AMTs, the effects of tide, water column density and barometric pressure changes can be removed from the results leaving only the relative seabed depth changes remaining.

Sounds simple? It’s not. A lot of hard work has gone in to developing this system so that it can provide both the sensitivity and long-duration service needed, at the seafloor depths required. This has included innovations in high-performance acoustic signaling, pressure sensing, low power electronics, waterproof pressure tolerant and corrosion resistant marine housings, battery technologies and acoustic transducer designs. We’ve also added an in-situ pressure sensor calibration in a process known as Ambient Zero Ambient (AZA) to address the inherent drift that pressure sensors experience without having to retrieve them to surface.

These systems are field-proven. Following first sea trials at Ormen Lange, we conducted a longer-term deployment at the same site, from 2010 to 2015. During this deployment, nearly 220 AMTs were deployed, enabling five and a half years of continuous subsidence monitoring over the site, collecting more than 600 million range observations. Versions of the system have been deployed by operators in UK North Sea, the US Gulf of Mexico and offshore Asia.

Leveraging moves into marine autonomy
But, we have not stood still. Using unmanned vehicles, we have been able to take this system even further: we can localize the precise positions of our AMTs using GPS-Acoustic box-in (GPS-A) and then perform wireless data retrieval using unmanned surface vessels, such as Liquid Robotics’ Wave Gliders. Using unmanned systems saves cost, as they typically have running costs that are one or two orders of magnitude lower than average manned vessels.

The result is that we now have instruments that are fully autonomous; can be deployed to the seabed, remaining in place for 10 or more years without any direct intervention; make highly precise measurements of horizontal and vertical movement; and, using remote unmanned wireless data gathering capabilities, can routinely report information back to a user sat at his or her desk. It can therefore be used for the most challenging and high sensitivity settlement monitoring projects globally. 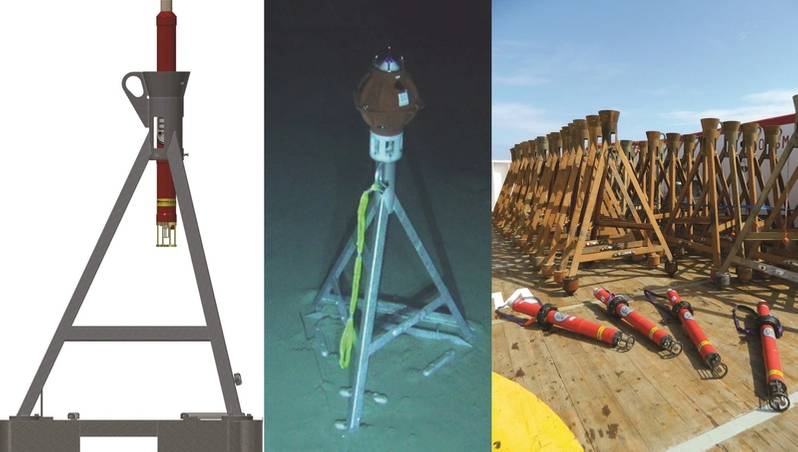 Left to right: An AMT tripod frame assembly, an AMT variant installed subsea for subsidence monitoring in the US Gulf of Mexico, and AMTs and their frames following recovery after more than five years deployment (Images: Sonardyne)

Improving accuracy, improving results
The work doesn’t stop. We’re also continuously looking to improve the precision of our seabed settlement monitoring equipment. Through our work to enable regular in-situ calibration, as well as a research program to select and pre-characterize the best pressure sensors, and to localize the positions of equipment from surface drones, we have been able to achieve close to 1cm/year measurement sensitivity.

This is exciting – it could revolutionize seabed settlement monitoring because it unlocks a whole new global capability for monitoring fields that subside very slowly, including deepwater fields, such as those in the Brazilian pre-salt and the Gulf of Mexico.

What’s more, this technology is also providing data that ocean scientists previously couldn’t access, for subduction zone and tectonic plate movement monitoring. Until recently, scientists almost exclusively depended on the use of manned research vessels to undertake observations at sea. This meant they only had sporadic and limited data acquisition projects, which in turn meant that they were unable to satisfactorily model subduction zones. These are areas where an oceanic crust submerges under a denser continental crust and creates the frictional energy build-up that is typically associated with the world’s most damaging earthquakes and tsunamis. Now, they not only have the ability to acquire this subsidence data, but, with the ability to perform GPS-acoustic box-ins, we can precisely locate the absolute positions of each AMT so that this data can be used with models. This data has previously been out of reach to scientists.

Enabling tsunami and earthquake research
GEOMAR, among others, have deployed Sonardyne’s seabed deformation monitoring system in a number of European and South American locations to measure the build-up of strain associated with tectonic plate movement. For one deployment along the Nazca-South American tectonic plate off the coast of Chile, GEOMAR were specifically interested in the build-up of horizontal strain that can be used to predict when large displacements might occur in the subduction zone. This system is unique in being configured with lower frequency acoustic signals that propagate readily over considerable distances, a setup required for effective wireless communication in the extreme depths (greater than 5,000 meters) in which some of these instruments have been deployed.

Scripps Institute of Oceanography, which first used this technology in 2013-14, is working with the United States Geological Survey (USGS) to better understand the Cascadia Subduction Zone in order to better predict when a major event is more likely to occur. It is using Sonardyne’s Fetch instrument (functionally equivalent to the AMT, but with a much bigger battery that enables deployments of up to 10 years) for the seabed component of the study.

The technology is also the basis of a Japanese Government funded collaboration between the University of Kyoto, Universidad Nacional Autónoma de México and New Zealand’s GNS Science; “Hazard Assessment of Large Earthquakes and Tsunamis in the Mexican Pacific Coast for Disaster Mitigation”. Further significant programs are also being proposed.

Precise, accessible insight
Our seabed deformation monitoring system is giving operators and scientists centimetric detail of seafloor movement, to help manage and maximize their resources and monitor submarine plate tectonic movements in far greater detail than they have ever been able to do before, all at a fraction of the cost of previous methods. 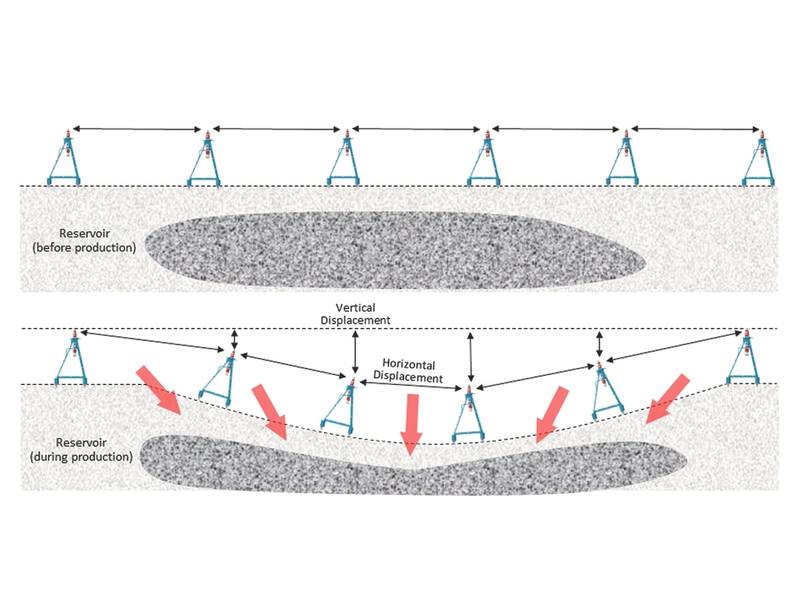