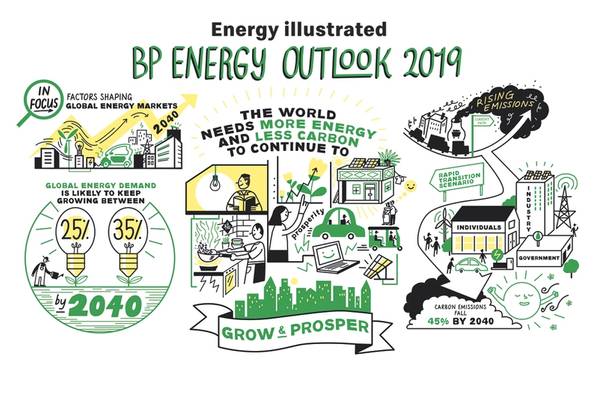 Supplying the energy needed to support the growing prosperity of the global population yet reducing emissions enough to meet the Paris reduction goals is a major challenge, BP Chief Executive Bob Dudley said.

It is, Dudley said, “a vast and complex problem, probably the defining one of our time.”

BP’s 2019 Energy Outlook, released Thursday, considered scenarios in which world GDP grows by a third to more than doubling by 2040, driven by increasing prosperity in fast-growing developing economies. Demand for oil grows in the first half of the outlook period before gradually plateauing, while global coal consumption remains broadly flat. Natural gas grows robustly, supported by broad-based demand and the increasing availability of gas, aided by the continuing expansion of liquefied natural gas. The world continues to electrify, with around three-quarters of the increase in primary energy absorbed by the power sector.

The report explores the possible implications of uncertainties around how much more energy the world needs, changing demand for plastics affecting demand for oil, trade disputes, renewables growth and what needs to be done to reach a low-carbon energy system.

“Predicting how this energy transition will evolve is a vast, complex challenge. In BP, we know the outcome that’s needed, but we don’t know the exact path the transition will take. Our strategy offers us the flexibility and agility we need to meet this uncertainty head on,” Dudley said.

While about two-thirds of the plastics are durable goods like chairs, the rest are single use and currently account for about 3.5 million b/d of demand. That number could grow to 6 million b/d in an evolving transition scenario, but if a worldwide ban on plastic packaging comes into play, demand will grow, but less so, Dale said.

A reduction in openness and trade associated with an escalation in trade disputes could reduce worldwide GDP and energy demand. Increasing concerns about energy security may cause countries to favor domestically-produced energy, even at a 10% premium on cost, leading to a sharp reduction in energy trade, Dale said. The greatest impact would be on net energy exporters.

“The message from history is that concerns about energy security can have persistent, scarring effects,” Dale said, citing the oil embargo of 1973. 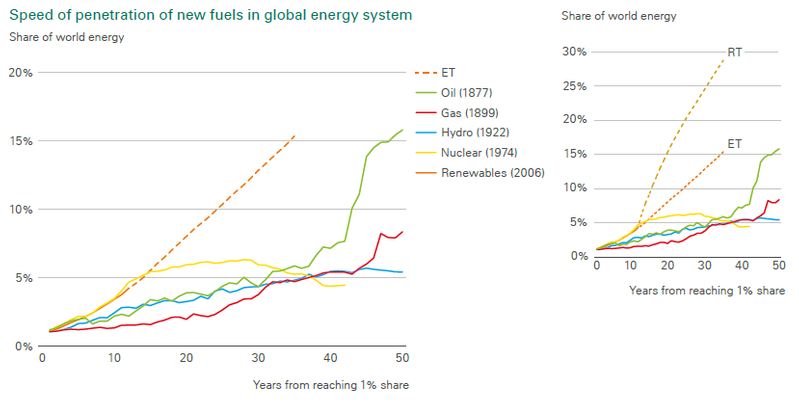 BP believes renewables are set to penetrate the global energy system more quickly than any fuel in history (Source: BP)

Dale said renewables are poised to reach 10% share in 25 years, “more quickly than any energy in history,” in the evolving transition scenario. More stringent regulations, aimed at meeting emissions reduction goals, could lower that to 15 years.

“It would require unprecedented change in the global energy system,” Dale said, including a comprehensive set of policy measures aimed at a rapid transition to a lower carbon energy system.

“The world is making some progress, but the bad news is the progress is nowhere near fast enough to meet the Paris goals,” Dale said. “The road to Paris is long and challenging.”