The Mumbai High North field lifting programme, which began on 20 January and is expected to finish early this month, included four big lifts: the record-setting 4000t MLQ lift and three others of 3400t, 3500t and 3600t apiece for the MNP (Mumbai North Process) platform. The modules were built at Larsen & Toubro's Surat yard, about 200km north of Mumbai.

Between 20 January and 5 February, Oleg Strashnov's DP3 capability enabled it to take on additional work on the project, while another HLV – McDermott's DB101 – worked in the same area in anchored mode. There would not have been room for two anchored vessels. According to Seaway Heavy Lifting (SHL) project manager Jos Hermans, the further workscope comprised about 20 lifts of over 500t and another 20 or so smaller lifts for the MNP and MLQ platforms.

The Mumbai programme has been executed at very short notice, as it was originally due to be carried out by another contractor, whose vessel was delayed elsewhere. SHL was awarded the contract by Larsen & Toubro at the beginning of November 2011, so basically only had eight to 10 weeks preparation time to assemble the rigging (some came from Singapore and some from the Netherlands), check the guide/bumper systems, and most challenging of all, obtain the necessary clearance permits for both personnel and vessels. Most of the rigging was in time to be delivered to the yard, but three structures were rigged by SHL directly.

‘The rigging delivery and the formalities were a big achievement from our side,' says Hermans. ‘We had to request more than 400 permits for our personnel and deliver a lot of documentation not only for the Oleg Strashnov, but also for the two tugs Bluster and Posh Resolve, contracted on the spot market.'

A contributing factor to the success in India, according to Hermans, was the thorough workout the vessel received last year on its maiden project in the UK North Sea. This was on Scira Offshore's Sheringham Shoal wind farm project, again a last minute assignment for SHL after the original foundation installation contractor ran into difficulties (OE September 2011). The Oleg Strashnov went on to install the 2100t Clipper South deck for RWE-Dea in September, then a MetMast foundation for Fluor on the Greater Gabbard wind farm, before heading for India.

The multiple smaller loads at Sheringham Shoal – 71 foundations plus two substation topsides – allowed the vessel's systems to be thoroughly tested and any start-up snags to be addressed, obviating the need to source any spare parts in India, says Hermans. SHL marketing manager Aart Ligterink agrees. ‘The vessel was delivered nearly a year late, but when it was delivered it was working like a Swiss watch,' he says. ‘We are very pleased with the way the vessel works and operates. It was very smooth in its start-up project, with a high safety awareness by the crew.' He is also full of praise for the rapid mobilisation to India. ‘I think it is a compliment to the engineering department with all the engineering necessary to prepare the manuals in a very short period.' The Indian assignment has also given SHL valuable DP experience, which was a new area for the company, although the captain and DP officers have previous experience in this field.

‘It is a vessel which enables Seaway Heavy Lifting to enter into different markets and work for the major oil companies, offering a wider type of service, and the clients clearly see the benefit of the DP and its crane capacity,' stresses Ligterink. ‘With this vessel we are clearly positioning ourselves in the upper end of the heavy lift market.'

Looking ahead, Ligterink expects the Oleg Strashnov to be working both offshore oil & gas assignments – in deepwater, installing modules on spars, TLPs, FPSOs, and installing subsea templates – but also in the offshore wind sector. ‘The high sailing speed of the vessel makes it possible to mobilise quickly round the globe, from the Gulf of Mexico, to West Africa and even relatively quickly to Southeast Asia,' he explains. It also enables SHL to mobilise the vessel swiftly to remote locations where modules need to be lifted on FPSOs in the field, helping to minimise disruption to production, adds Ligterink.

In the offshore wind market the new vessel has already proven to be very efficient, he says. In addition to wind foundation installation, SHL is looking into transporting the whole wind turbine generator (WTG) in one go, and transporting five or six at a time on its 3500m2 deck to the offshore location, then installing them one after another on DP. ‘We have been talking to the WTG fabricators, doing calculations on the accelerations to ensure that they remain within the boundaries set by the designer during sailing.' On its return to Europe from India the Oleg Strashnov's heavy lifting capacity will be brought to bear around the end of May on the large monopiles – weighing 740t and 72m long – required by another wind farm development, EWE/Enova Riffgat in the German Bight.

An innovative feature of the vessel's 5000t crane is its hinged A-frame. This allows it to be lowered for passage under Suez Canal or Bosphorus Strait bridges, reducing sailing distances and fuel consumption substantially as well as reducing emissions. The crane has a lifting capacity of 5000t on its main hoist at a distance of 32m, and at its maximum outreach of 85.5m it can lift 740t. The main hoist can load up to 98m above sea level.

The vessel has a patented hull shape with a small waterline width when in transit, reducing through water resistance, and enabling it to achieve a maximum speed of 14 knots. It can be ballasted down when greater stability is required, such as during heavylift operations.

SHL has had a long relationship with Larsen & Toubro and has worked with the company on several previous projects for ONGC using its 2500t heavylift vessel Stanislav Yudin. It mobilised in March to install the topsides for a substation at Dong Energy's Anholt wind farm in the Danish sector. This is expected to be followed by further wind farm work and a platform installation for ConocoPhillips' southern sector Katy field, with more wind farm work lined up after that.

Last season's schedule also provided valuable experience in a business segment which is beginning to gather momentum: offshore decommissioning. In the southern North Sea between March and July 2011, SHL removed the Inde November, Kilo, Mike and Lima platforms for Shell as well as the Juliet complex. Aart Ligterink stresses the importance of the early involvement of the lifting contractor on such projects to help improve safety and save both time and money. OE 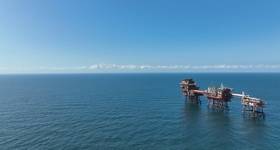