Demand for qualified and experienced personnel is strong on a global basis—especially in offshore renewables.

The industry is relatively new and it has also seen a number of new vessels built and there are just not enough staff to man these new units, says Dutch recruitment specialists iPS Powerful People.

In addition, the industry, which once could be criticized for its lack of health and safety stringency, has now developed strict demands and requirements for highly qualified staff, says Nick Spies, division director for offshore/oil and gas, at iPS, based near Rotterdam.

“The renewables industry is the hot topic in the offshore industry,” Spies says. “The established dredging and offshore players have started looking at and working on renewables projects and, over the coming 30 years, we expect these will bring a lot of work. It has recently become apparent that the renewable projects also will have various maintenance requirements that will require attention and will produce further work.

In early June, about a third of iPS’ business was the offshore energy sector, with about 80% of that in renewables specifically, which goes to show the personnel growth in this market.

The main skill requirement in offshore renewables is heavy lift personnel, Spies says, and staffing for new vessels. “There are a lot of relatively new self-propelled jackups in the industry, and because it is a relatively new sector there is limited experienced expertise. What experience and expertise there is has been built up over the last 6-7 years; however, during that time, a lot of new assets have been built, and owners find it a challenge to sufficiently man them. We help them in this respect.”

The level of qualification staff require to work offshore is also high now, Spies says, with requirements including working in confined spaces, basic offshore safety induction and emergency training (BOSIET), working at heights, and slinger banksman. ”Some of our clients are also requesting helicopter landing officer when helidecks are involved. When you look at the training matrix, a simple BOSIET will just not do.”

Some also require crane operator stage 3 assessment, which is training for vessels which use dynamic positioning during lifting operations, which isn’t necessarily applicable to wind farm operations carried out while in jackup mode, an issue further complicated by a vessel’s flag state requirements, says Spies.

iPS Powerful People was set up in 1989 and is based near Rotterdam with offices globally being able to professionally serve the Offshore and the Renewables industry. 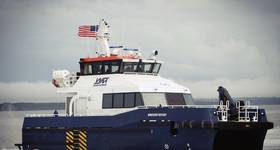