The flexible, state-of-the-art RLWI (Riserless Light Well Intervention)/IMR (Inspection/Maintenance/Repair) vessel will serve her first five years for FTO Services, which is a joint venture between FMC Technologies, Edison Chouest Offshore and Island Offshore in the Gulf of Mexico (GoM).

The vessel is customized to suit the scope of work in the FTO contract, in which RLWI and IMR are the main tasks. It is able to perform operations at depths down to 3000m, and is expected to start this charter at the end of this year. However, prior to going to the GoM, it will be utilized in Norway’s RogFast project, in which the scope of work will be to investigate the sea bottom.

A large intervention tower is placed over the 8m x 8m main moon pool. It is equipped with a 250-tonne AHC (active heave compensated) offshore crane with a below-deck winch, and carries two deepsea work ROVs, one to be launched through a dedicated moonpool and the other from the starboard side.

Island Performer is the next generation subsea vessel from Ulstein, with large accommodation, storage and lifting capacities. It meets the highest standards for station keeping, redundancy and dynamic positioning (DNV GL class notation DYNPOS AUTRO, equivalent to DP3). Additionally, operability in DYNPOS AUTR (DP2) operational mode is maximized due to the ‘Operation+’ feature with a three-split configuration on main machinery. This setup allows the vessel to retain system integrity and to continue operations uninterruptedly even after a substantial single system failure.

A shelter deck stretches all the way past the main moonpool and aft to the main crane. This increases the operational window for moonpool work and offers a shielded space for various equipment. Arranged on the shelter deck is a multi-skidding system for handling 100-tonne skidding pallets. The design also includes a heavy-load cargo deck for transporting equipment for a multitude of operations and construction work.

It has been developed and built according to the latest international regulations in which safety and comfort are two key issues. The vessel is equipped with resiliently mounted tunnel thrusters, and it carries the DNV GL class notation Comfort Class, COMF-V1, which ensures that noise and vibrations are kept at minimum. SCR (Selective Catalytic Reduction) catalysts are installed for all engines. An ESD system (Emergency Shut Down system) is installed in order to automatically close down systems in case of a hydrocarbon leakage. Island Performer has room for 130, and in case of evacuation, each of the lifeboats on the starboard and port sides can accommodate everyone on board. Carrying the patented Ulstein X-Bow, the vessel has reduced speed loss in head seas, resulting in reduced fuel consumption and emissions to air.

Meanwhile, two of the Island Offshore PSV fleet are currently alongside at Germany’s Lloyd Werft, Bremerhaven undergoing conversion to specialized vessels designed to revitalize low-performance oil sources. Both vessels arrived in 2013 and are under extensive conversion for a charter to Schlumberger, which is an active partner in the conversion work. The two vessels involved are the Island Centurion and the Island Captain.

Two later ships in the same series, Island Contender and Island Crusader, are billed as the first offshore supply vessels to operate in DP2 mode without using diesel and with Rolls-Royce designed lean-burn, gas-powered engines.

Keppel Singmarine, part of Singapore’s Keppel Offshore & Marine, has secured a contract from Baku Shipyard LLC to design and carry out fabrication and outfitting works for a subsea construction vessel (SCV) which, when completed, will be deployed for the Stage 2 development of the Shah Deniz field that lies some 70km offshore Azerbaijan in the Caspian Sea.

The SCV is a project that Baku Shipyard recently secured from BP Exploration (Shah Deniz) Ltd., the operator of the Shah Deniz gas field development. It is the first major contract secured by the shipyard since its inauguration during September 2013.

Baku Shipyard, in Baku, Azerbaijan, is a joint development among Keppel O&M, the State Oil Company of Azerbaijan Republic (SOCAR) and Azerbaijan Investment Co. (AIC). Keppel O&M, SOCAR and AIC own 10%, 65% and 25% share respectively in the yard. Keppel O&M is responsible for management and operation.

Keppel Singmarine’s work scope includes the design of the vessel, the fabrication of the hull strips and outfitting them with equipment and systems at its yard in Singapore. The hull strips will be shipped to Baku Shipyard for integration with other components fabricated by the shipyard, and completion after commissioning works and sea trials. The SCV will be built to the proprietary design by Marine Technology Development, the ship design and development arm of Keppel O&M.

The SCV will provide essential support for the construction of subsea structures which will form the biggest subsea production system in the Caspian. Designed to work in 2.5m significant wave height (Hs), the vessel will be equipped with a DP system, a 750-tonne heave compensated crane for 600m deep subsea operation, an 18-man two-bell diving system, and two work-class ROVs.

The newbuild is based on the Red Class 6027 MT design DSCV, and will have a DP3, 142m long subsea/dive support/ construction vessel notation

Delivery of the first vessel is planned for early 2017. The vessel will be an 18-man twin bell unit and was designed to operate down to 4000m water depth. The vessel was designed in collaboration with Norway’s Marin Teknikk.

It will have Unique Hydra’s 18-man twin bell saturation dive system. It will also have a 400 VLT over a reinforced moonpool area. The vessel also has two, 250 hp work-class ROV designed to work to 3000m installed in ROV hangers inside the vessel. In addition, it will have a 400-tonne crane, which is rated to 5200m single fall and 3200m dual fall, and an open deck of 1500sq m, which will be strengthened to 10-tonnes/sq m.

Norway’s VARD, a wholly-owned subsidiary of Italy’s Fincantieri S.p.A, operates 10 shipbuilding facilities, including five in Norway, two in Romania, two in Brazil, and one in Vietnam. VARD is currently constructing an OSCV 12-designed offshore vessel for Norway’s DOF Subsea. The vessel is designed for subsea construction and pipelaying, IRM and ROV services up to 4000m depth. The vessel, classed by DNV GL, is 160.9m in length and has accommodation for 140 people. This vessel is due for delivery next year, when it will be DOF’s largest vessel.

DOF Subsea also has two 146m (120 man accommodation) offshore vessels designed for subsea construction and pipelaying, IRM and ROV services down to 3000m depth, both due for delivery in 2016.

In June, Norway’s Solstad has confirmed an order with Norway’s VARD Group for a newbuild, large subsea construction vessel. The firm contract comes after Solstad signed a letter of intent (LOI) during March with a major international offshore contractor to build and operate the vessel, including a LOI with VARD to construct the vessel. The LOIs that were notified to the Oslo Stock Exchange have now been converted to firm contracts.

The new VARD 3 19 design vessel will be developed by VARD Design in Ålesund and is claimed to be the largest in the Solstad fleet.

The 180m-long vessel will have a 550-tonne top tension vertical lay system to enable the installation of large diameter flexible pipes in ultra-deepwater environments. Featuring a deck area of more than 2500sq m, the vessel will have a beam of 33m and be installed with a 900-tonne AHC offshore crane and a 4000-tonne under-deck carousel for storage of flexible pipes, cables and umbilicals.

Construction on the vessel’s hull will be carried out at VARD Tulcea in Romania, while outfitting will take place at VARD Brattvaag in Norway. Following delivery of the vessel, which is scheduled for the 2Q 2016, the client will charter the vessel for a minimum of eight years.

Also in June, Norway’s Rem Offshore signed a contract with VARD for the design and construction of a new immensely powerful offshore construction and anchor handling vessel with 400-tonne bollard pull capacity.

The vessel, a VARD 2 06 design, will be one of the most powerful anchor handling vessels and is aimed at supporting ultra-deepwater operations worldwide. It will be powered by two 4MW main engines and two 2.2 MW auxiliary engines powering a hybrid-electric power plant. The vessel will be DP2-equipped and have two main propulsion shafts driven by an electric motor fed by the main engines with boost capabilities from the auxiliaries. A pair of tunnel thrusters fore and aft and a retractable thruster on the bow will also be outfitted.

The vessel comes at a total contract price of NOK800 million and will feature an A-frame as well as a 150-tonne AHC offshore crane and accommodations for 90. The hull of the vessel will be built at VARD Tulcea in Romania and then shipped to VARD Brattvaag in Norway for final outfitting. Delivery is planned for 1Q 2016.

Click Here to participate in the our survey: Do you see LNG as a viable fuel source in the next five years? Ten years? 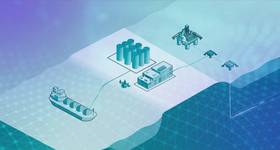