A multi-model approach is being used to take into account new phenomena and any number of structures, whatever their type, for ice-load modeling offshore. Philippe Cambos explains.

As energy exploitation pushes further into the Arctic regions more specific techniques are needed to understand the effect of ice movement on offshore structures.

There is a lot of experience with ice, but new structures in the high Arctic will demand structural optimization and design validation for very severe ice conditions where experience is more limited. Ice basin testing will take too long and is too expensive, so new tools are needed to speed the process and reduce the number of ice model tests.

International classification society Bureau Veritas (BV) has worked on the front-end engineering and design (FEED) for the Shtokman project (operated by Gazprom), and separately with Saint-Petersburg Technical Marine University, it has developed new software for direct analysis of hull structure strength for ships operating in ice. The tool, IceSTAR, has been used to assess the hull structure and cargo containment for the unique double-acting icebreaking LNG carriers, which will service the Yamal project (Novatek).

But, IceSTAR was built and validated for ships moving into ice, to help them develop safe navigation criteria. The behavior of the ice itself and the movement of the ice are less critical than the movement of the ship. For fixed or floating anchored structures the ice behavior is critical and further work was needed to model ice loads on offshore structures with the level of detail, precision and reliability needed. That work is ongoing, under a contract with Technip in cooperation with Cervval, a French specialist software company.

The aim is to develop a simulator to predict the flow of ice around both fixed and floating structures and calculate the ice loads on the structures. The program will ultimately allow platform structures to be optimized so as to minimize ice loadings and ice rubble build-up prior to final design verification in an ice test basin.

The first stage of the project is now complete and allows simulation of the flow of an ice sheet as it impacts on a conical structure. That was chosen as the first step to meet the specific needs of Technip’s designs for use offshore Kazakhstan, in the shallow water and heavy ice conditions of the Caspian Sea. The program is also applicable to Arctic conditions and in the second stage, now ongoing, the software is being extended to cover ice interaction with a straight sloping wall structure. It will in the future cover vertical-walled fixed structures and a range of floating structures.

BV is providing Cervval ice expertise and verification during the software development process.

The program uses a multi-model simulator that copes with the complexity of calculating the kinematic and failure behavior for the ice sheet and for each ice fragment that results from contact with the structure or from collision with other ice rubble particles.

The design tool predicts vertical and horizontal loads on the structure with accuracy. It also predicts the geometry of the ice accumulation in front of the structure, above and below the ice sheet.

Ice moving against a structure can fail by bending, crushing, splitting and shearing. A number of empirical methods based on ice model tests allow assessment of ice load components, but they require extrapolation of the model test results to full-scale conditions and suffer limitations if ice strength or the ice thickness differs from required values. They are also dependent on the structure shape used in the model tests, and cannot be extended to other types of structure.

BV and Cervval are combining knowledge of ice behavior from a number of sources in order to create a complete numerical simulator for ice design. The tool brings together several algorithms of different scales and behaviors, and simulates the structure, the level ice sheet, ice fragments, ice pile up, water and currents.

It starts with conical structures, as these are the preferred design geometry for Arctic applications. The simulation of ice behavior can be taken in two steps. First, the flexural cracks in the ice sheet and ice fragments are calculated, then the behavior of individual ice fragments and the sheet are modeled.

For the purposes of this simulator, the structure, ice fragments and ice sheet are considered as rigid body objects in order to compute their dynamics. Simulation of the motion of a system of rigid bodies is based on the Newton-Euler equations.

This model is useful for predicting the initiation of cracks formed in the ice, simply by comparing the stress levels in the ice sheet with the flexural strength of ice. However, this alone does not predict the number and the extent of the cracks or the ultimate failure of the ice sheet.

Using fracture mechanics concepts, where the energy input from the external load is balanced by the energy dissipated in deforming the ice and creating the cracks helps define the ultimate failure of an ice sheet. Observations show that ice begins to fail by forming cracks in the radial direction, starting from the contact point. These radial cracks are due to the tension at the bottom of the ice plate. Increasing the forces applied on the ice will increase the number of radial cracks and lengthen them until a circumferential crack is formed. In the simulator, five wedge-shaped beams resting on an elastic foundation are used to model the cracking.

There have been experimental basin tests of ice loadings on a multifaceted conical structure similar to the designs proposed for Arctic use, and the new software has been validated against these tests. The validation shows that the model results are in agreement with the basin tests.

An advantage of the simulator is allowing users to test a wide range of parameters in a short time frame when compared to basin tests. Ice sheet velocity and thickness, structural orientation, frictional coefficients and ice elevation can all be varied to help optimize the design geometry, or to validate the structural calculations for the design.

In conclusion, the IceSTAR software accurately models ice loads when the structure is moving, this new software simulator will do the same for a fixed or anchored structure where the ice is moving.

Philippe Cambos is the technical director in charge of oil and gas projects, and Arctic projects for Bureau Veritas Marine & Offshore Division. He is a naval architect and helped develop the VeriSTAR software before going on to handle plan approval and design review for oil tankers, gas carriers and offshore units. 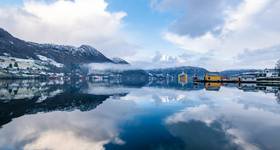