Chris Chalker, former managing director of Paradigm GeoKey, has joined the GEODynamics team as vice president - eastern hemisphere and will be based in Aberdeen to manage and grow GEODynamics’ business throughout the region.

“We are very excited about this transaction and our future growth in the North Sea and all of the eastern hemisphere,” said David S. Wesson, President and CEO of GEODynamics. “We have many great customer partners in the region and this will allow us to better support them in the future as well as support operator clients in areas where GEODynamics’ products have not been available in the past. [Chalker] brings an added dimension to our executive team and we know he will make a big impact to our global growth.”

“Our Aberdeen-based team members are very familiar with GEODynamics’ market-leading perforating technology,” said Chalker. “By joining forces with GEODynamics, we can better serve our customers to maximize the value of their assets and improve their operational efficiencies. In particular, GEODynamics’ game changing REACTIVE Perforating Technologies and their latest ECLIPSE Casing Removal Perforating Systems for the P&A (plug and abandonment) market, will help clients operate better in the difficult North Sea market.” 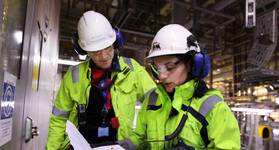