Bosch Rexroth has received an order from GustoMSC to engineer, manufacture and commission the drive and control system for GustoMSC's most recent model in its series of continuous jacking systems. It is intended for a Japanese construction vessel, allowing it to perform windmill installations at sea. The continuous jacking system (CJS) is based on lifting functions in which 48 hydraulic cylinders directed by a digital control work together seamlessly. Sensors and displacement sensor systems provide feedback for the complex cylinder movements. The CJS lifts the vessel out of the water in one fluid motion, turning it into a stable offshore "construction platform."

In addition to designing and supplying the complete jacking system, they have also designed the Japanese vessel, which is able to install windmills on the seabed in a single day under normal weather and sea conditions, drastically reducing the “splash zone” transition.

The CJS consists of four robust steel legs, with four movable jacks fitted around each leg, each connected to the piston rod of two hydraulic cylinders. The legs are first to be anchored into the seabed in a controlled manner, after which the vessel is lifted entirely out of the water, providing a kind of stable “construction platform” for erecting the windmill with the onboard cranes. Using hydraulically powered pins that drop into the holes in the legs, three jacks remain connected to the legs at all times during the leg and vessel movements. The “separate” fourth jack is then moved to the starting position, after which it is anchored with the pin, and another jack is sent from the end position to the starting position. This makes it possible to place the leg on/in the seabed in one uniform motion, allowing for three-dimensional stabilization of the vessel and for lifting or lowering it at a constant speed. The movement pattern is extremely complex. It is regulated by the controls, the cylinder displacement sensor systems and other various sensors. This means, for instance, that the cylinder of the jack that returns to the starting position moves much faster than the other cylinders that are lifting the vessel out of the water at that moment. This represents a new way of integrating hydraulics, electronics and software.

A total of 32 hydraulic lifting cylinders are active during the jacking up movement. There are another 16 cylinders for moving the anchoring pins, while the jacking system consists of valve blocks, the control system and specially designed software. Testing and commissioning takes place on site by GustoMSC in collaboration with Bosch Rexroth in Japan.

The extreme conditions found in the offshore industry (in particular salty and aggressive environments) place exceptional demands on the equipment used. This was a serious factor taken into account during the design phase, which was translated into a functional design, material choice and special facilities. To create durable hydraulic cylinder rods, Bosch Rexroth applies different Enduroq surface-protective techniques such as High Velocity Oxygen Fuel (HVOF) coatings, stainless steel welding and laser cladding. Both research and development and the procedures for applying high-grade protection under stringent quality standards are conducted in-house at Bosch Rexroth and are testaments to its quality guarantee. The Enduroq 2000 HVOF coating was used for the CJS on the Japanese construction vessel. The HVOF coating technique offers the option of applying a Cylinder Integrated Measuring System (CIMS). This measurement system, developed by Bosch Rexroth, is based on the grooves in the rod's parent material, and is read by a sensitive sensor through the protective layer. This enables the exact rod position to be determined with a precision within tenths of millimeters. The hardware and software have been integrated in the newest generation of CIMS sensors, forming the basis for Condition Monitored Maintenance, part of Bosch and Bosch Rexroth Industry 4.0 developments.

The hydraulic control of the CJS is provided by a power unit from a Bosch Rexroth modular hydraulic power unit (MHPU) introduced at the end of 2016 and specifically designed for the marine and offshore market. A Lloyd’s Type Approval has been included in this program, but other Classifications are also possible, such as with ClassNK in this project. These power units cover a power range of 350-3000 kW at working pressures of up to 350 bars. IE3 electric motors, which can drive one or more pumps, are employed for driving the pump units. The MHPUs are also fitted with extra sensors and interfaces for Internet communications, preparing them for Industry 4.0 and condition monitoring. 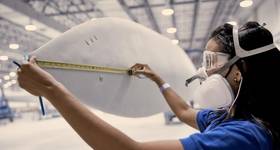