A 'hot market' getting hotter

No crystal ball is needed to determine one area of offshore activity where spending will rise inexorably in coming years: inspection, repair and maintenance. With one leading commentator predicting this sector’s annual spend will reach $7 billion by 2014, Jennifer Pallanich stopped by on a recent gathering of subsea IRM business leaders in Galveston to hear about the latest technology trends and business opportunities.

Operators are ‘beginning to understand there is money to be saved’ by investing in integrity management, John Green, an engineering manager at Stat Marine, told the Subsea Survey IRM 2010 conference. A concern, he noted, is that data collection ‘is sometimes overlooked’, adding that accurate data is crucial to any inspection, repair and maintenance program.

On the question of equipment repair and maintenance, Jason Stanley, Schilling Robotics’ VP of sales, commented: ‘The sooner we can get this equipment back to work, the better off we are.’ Some operators are starting to require far more in the way of remotely operated vehicle (ROV) automation and that’s made a big difference for us,’ said Stanley. ‘Automation is a key thing for us [and] can dramatically impact productivity. We’ve already seen the value of that.’

ROVs and their autonomous underwater brethren AUVs also need to be prepared to handle the ‘significant’ complexity that Stanley believes is headed to the seafloor.

AUVs, with their batteries, have limited operational time and must follow a rigid programmed mission. They have low bandwidth communications and limited power. They are independent from the support vessel and can be deployed from a vessel of opportunity. ROVs have no time limit for deployment and can be controlled in real-time. They have high bandwidth communications and high power. They can be deployed from a DP2 multi-role support vessel.

Alain Fidani, Swimmer AUV program manager at Cybernetix, said the world needs both AUVs and ROVs. ‘AUV’s won’t replace ROVs. Both of them have a role to play.’

Richard Mills, AUV marketing manager at International Submarine Engineering, pointed out long-term deployments are possible for AUVs. ‘The future for unsupervised activities is here,’ he said, noting that one of his company’s AUVs carried out a long-term Arctic seabed survey in 2010.

‘The big thing for us is energy,’ he said. ‘Manipulation tools require a lot of energy.’ And looking forward, he added: ‘Reactive, predictive . . . is going to be the next big hurdle.’

Dan McLeod, director of offshore systems and sensors at Lockheed Martin, recalled that cost escalation drove the move from manned submersibles to ROVs. ‘There are no choices but ROVs for deepwater operations today,’ he said. ‘Heavy work is always going to be done by ROVs.’

Jonathan Epstein, president and CEO of Hawkes Remotes, wondered what ROVs would be like if they hadn’t first been designed nearly half a century ago. ‘There have been incremental improvements, but there haven’t been quantum leaps in design,’ he explained. Hawkes is working on a new generation of ROVs with a 20km range and standard depth rating of 4000m. Instead of a tether management system, it relies on either a single use (thinner) or reusable (thicker) fiber optic cables made by a third party.

‘The tethers themselves are the single most constraining factor in ROV performance,’ Epstein noted. A tether management system weighs a lot because it requires a winch and crane system, but, Epstein asked, ‘If we give you something that is free of the existing movement constraints for ROVs, what does that open up for you?’

Steven Kopits, managing director at Douglas Westwood, described subsea IRM as ‘a pretty hot market’. His firm is forecasting that the subsea IRM market as a whole will grow from $4.5 billion in 2008 to $7 billion in 2014, with demand shifting around the world. ‘Africa comes to the fore by 2014, over the Gulf of Mexico and the North Sea,’ Kopits predicted. OE 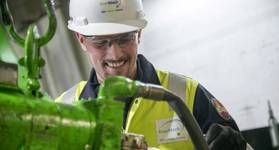 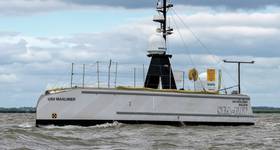