It was the first floating production unit in the North Sea and it’s still going strong – with a deployment to its latest field, on its 12th contract, due to start next year. Elaine Maslin looks at Teekay Offshore’s Petrojarl I.

When the Tentech 685 design Petrojarl I floating production, storage and offloading (FPSO) vessel floated out of NKK’s yard in Japan in 1986, destined for the North Sea, few would probably have expected that nearly 30 years later it would finally be leaving the basin, and not for a scrapyard.

The move will see the Petrojarl I leave behind quite a North Sea heritage. The vessel is Teekay Offshore’s first FPSO, back when the company, formerly Petrojarl, was spun off of PGS. The list of field names it has worked is longer than even some oilfield workers can lay claim to, with Oseberg, Troll, Lyell, Fulmar, Balder, Fife, Fergus, Flora and Angus, Hudson, Blenheim, Kyle and, most recently, Glitne, in the Norwegian sector, from which it was removed in 2013.

Working on such a string of fields, across the Norwegian and UK North Sea sectors has meant the Petrojarl I’s production facilities have had to deal with a host of field conditions, which Teekay Offshore proudly states shows its flexibility, as well as high production regularity, at between 96-99%.

While the vessel was built for the harsh environment of the North Sea, its next move will see it operate in warmer climates. The long-serving, turret-moored Petrojarl I is heading to Brazil to work on its 14th field, Atlanta, for a consortium led by Queiroz Galvão Exploração e Produção (QGEP). The field’s water depth, 1535m, will be the deepest in which the vessel has worked.

The post-salt Atlanta field is a heavy crude oil field in the Santos Basin, estimated to contain about 190 MMboe recoverable with a production life in excess of 15 years.

Petrojarl I will be used as an early production system (EPS) on the field, some 185km offshore the Brazil coast from 1H 2016 on a five-year contract.

As part of the deal with QCEP, Teekay Offshore acquired the 215m-long Petrojarl I from Teekay Corp. for US$57 million and said it would spend about $175 million on upgrades at Damen Shipyard Group’s Schiedam facility in the Netherlands, where it arrived at the start of this year from Norway, extending the vessel’s life by 15 years.

The result will be marine, hull and life extension according to class, conversion of the process systems (i.e. separation train and produced water topsides) and Brazilian compliance.

To perform the work, Damen Shiprepair Rotterdam formed partnerships with Frames and Nevesbu. Frames is carrying out the design and fabrication of the new topside skids. Nevesbu is providing the marine, and topside integration engineering. 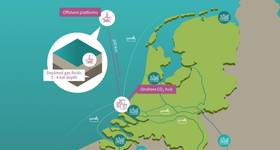