Assumptions around tidal arrays need to be rethought, according to Professor Stephen Salter. Emma Gordon reports.

The renewables industry needs to contest the assumption that turbines operating in arrays in tidal streams should behave like underwater wind turbines, a leading expert in the field says.

Stephen Salter, emeritus professor of engineering design at the University of Edinburgh, is often credited with being the founding father of the UK’s wave and tidal industry, having pioneered the development of wave energy in the 1970s.

Speaking at the All Energy Conference and Exhibition in Glasgow, UK, early May, Salter says if tidal energy is to realize the full potential from restricted flow channels like Scotland’s Pentland Firth, different assumptions need to be made, which would imply different turbine designs should be assessed.

Salter has been working on an alternative design to the traditional three-blade horizontal axis turbine design, a vertical-axis, variable pitch rotor design, comprising multiple vertical, pitch-variable blades supported on horizontal rings, which would occupy a large cross section of a restricted flow channel.

As part of an array of 200m diameter, 50m deep versions of these machines, in a restricted flow channel such as the Pentland Firth, Salter says each pair of devices could generate a staggering 400MW.

The figure is based on research by Ross McAdam at the University of Oxford, which has reinforced Salter’s questioning the accepted assumptions for restricted flow channel turbine design for areas such as the Pentland Firth.

He says the equation for hydraulic machines in a closed duct, which calculates power based on the head and flow rate, should be used when designing turbines in large, close-packed tidal stream arrays. And, to pinpoint the size of the resource, Salter adds that the head, which would increase as more turbines were installed, needs to be accurately measured.

Salter says it is important to find out how much energy is currently being wasted; adding that, if this dissipation is high, installing more turbines will not substantially reduce flow capacity. The official estimate, which uses a bed friction coefficient appropriate for fighter aircraft and does not take certain factors, such as channel obstructions, into account, is conservative, Salter says.

The effectiveness of this approach has been confirmed in tests carried out by McAdam at Oxford, Salter says. McAdam measured double the Betz limit with a “sweepage” fraction of 0.59.

Salter’s vertical-axis, variable pitch rotor design increases the resistance for the water to flow through its openings. Because the water has to exit through a smaller flow area, it will go faster, giving performance well above the Betz limit: the maximum coefficient of power for wind turbines, Salter says.

Further, the design achieves an even pressure drop across 95% of the rotor diameter, decreasing turbulence and improving the performance of successive rows of blades, he adds.

“What I want to do is have the wake much cleaner than what came in, and a pressure drop across rotors that is even,” Salter says. “You do this by having a vertical-axis rotor with blades at varying pitch, with two contra-rotating rotors. These pitch angles deliver nearly constant pressure.”

Delegates also heard the vertical-axis design allows for better blade mounting, with rotors supported at both ends: reducing pressure differences across the blades.

Salter adds that supporting the beam (or blade) at both ends reduces the bending moment by a factor of four, compared with a cantilever blade seen on traditional three-blade horizontal axis turbines, which are only supported at one end. Salter’s design also reduces the vortexes in the water created by traditional blades, which lead to energy loss and turbulence.

Salter also says contra-rotating rotors, using pitch control blades, mean the turbines could also be installed close together, canceling out each other’s cross-force. In addition, due to the number of blades on an individual machine, having some blades fail would not impact performance, adding redundancy.

To ensure sufficient stability in pitch and roll, the (horizontally orientated) diameter of the rotor needs to be around three times the water depth. Many areas of the Pentland Firth have depths of around 70m. 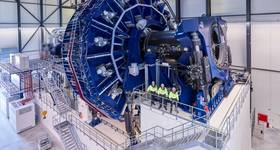