The wave energy sector has always provided something of a more mixed bag of concepts than the tidal sector. Elaine Maslin looks at some of them.

While there’s been a lot of depression in the wave energy in the sector in the recent past, following two well-known players, Pelamis and Aquamarine Power, based in Scotland, falling into administration, the prospect of more arrays being built out, even at demonstrator level, is bringing some confidence back to the industry.

“It has been a difficult couple of years for wave energy, but to some extent I see a sense of confidence coming back,” said Johnny Gowdy, who works for RegenSW, an independent market insight and advisory firm, at the All Energy conference in Glasgow in May. “Momentum is building back up with kit getting back in the water in the UK and around the world, and supply chain companies willing to invest.”

Indeed, as he spoke, Seatricity was installing its latest Oceanus 2 device in the water at Wave Hub, off Cornwall, England. The firm is looking to build out a 10MW array there. Wello, a Finnish firm, was also working to get its Penguin device back in the water, at the Wave Hub test site off Cornwall, and it has started building a second unit, with a third planned. Across in Nova Scotia, Cape Sharp Tidal was due to install two, 2MW OpenHydro turbines at the Fundy Ocean Research Center for Energy in June. So-called second generation developers are also fast catching up with new ideas on ways to do things better.

Yet, there’s still some way to go before the industry will reach a level of commerciality, said Adam Norris, founder and chairman of Wavepower, and chairman of a session at the European Ocean Energy Conference (EOEC) in Edinburgh earlier this year.

“The wind industry only really started in the 1980s and it took a while before it got commercial,” he said. “Even though these are the early pioneers, they are giving us hope the industry can move at a pace. But it will be some time until it is fully commercial.”

Carnegie Wave Energy has a number of projects planned, using its latest 1MW Ceto 6, sixth generation, 20m diameter unit, including integrated microgrids. The first Ceto 6 is due to be in construction this year, with commissioning due in 2017, for the fully funded Garden Island project offshore Australia. The next project is what could become a 10MW array offshore Cornwall. Carnegie’s design is a point absorber, using a submerged buoy, or actuator, 1-2m below the surface, which transfers ocean movement to a piston, fixed to the seafloor, to create hydraulic energy, which is converted into electricity, as well as desalinated water, using pressure to drive a desalination plant.

Its Ceto 5 unit, in a three, 240kW unit array off Perth, Australia, has seen 14,000 operating hours, with power generation onshore, plus water desalination. It was loaded up with some 400 sensors gathering more than 2.5 GB of data daily to aid optimization of the Ceto 6. On the Ceto 5, installation times were cut, from three days to 11 hours, port to port.

The Ceto 6 design moves the design on a step further with, unlike Ceto 5, more advanced controls and the power generation systems inside the buoy, for power generation offshore, reducing hydraulic line losses. Multiple devices are due to be installed at Garden Island, but it’s not clear how many. Carnegie describes the Garden Island project as being the first renewable integrated microgrid, providing power and water needs. As part of its goals in this area, Carnegie recently acquired a 35% stake in Energy Made Clean, a Perth, Australia-based electric engineering firm.

Another Ceto 6 project is planned at the Wave Hub site offshore Cornwall, where Carnegie has permission to build an up to 10MW Ceto project. Finance is progressing on this project and the firm aims to start construction in 2017, with operations offshore in 2018. Further down the road, Carnegie is also looking at projects offshore Ireland, Chile, and Canada.

Tim Sawyer, CEO, Carnegie Wave Energy, says Ceto 6 is a larger unit. “The focus is on scale and also yield and getting costs down.” Ongoing research is also being carried out at the University of Western Australia, looking at foundation design and loads and optimal number, size and arrangement of an array, and location of wave energy converters (WEC).

“It’s a long process iterating and progressing the technology so it is survivable and affordable,” Sawyer says. “But, the next deployment will be a step change.”

Swedish firm CorPower Ocean, one of the new generation of firms, also uses buoy technology, to absorb energy from the surge and heave of waves with its HiWave resonant WEC. But, it has sought to get out more with less using phase control, to enable it to oscillate in resonance with incoming waves. It does this using a pneumatic pre-tensioning system between the buoy and mooring system, to allow a higher rate of oscillation, as well as its WaveSpring technology, contained within the buoy, which amplifies the motion created.

WaveSpring is a negative spring arrangement that widens the response bandwidth of point absorbers without needing real-time wave information or predication algorithms, avoiding losses associated with transmitting large reciprocating energy flows through the power take off system, the firm says.

This linear motion is then to be turned into high speed rotation energy using a compact cascade gear unit. The mechanical energy generated is transferred via flywheels to electricity using small generators. In a storm environment, the phase control can be detuned to make the device “transparent.”

A full scale device, with a composite hull, is about 8m in diameter, and weighs about 60-70-tonne. While each would produces about 250-300kW, CorPower’s concept is that the devices would be deployed in farms of 20-1000 units, to create 10-240MW farms, reducing costs through mass manufacturing and a maintenance scheme based on replacement of entire units.

“We think this is a good combination of robustness and simplicity,” Patrik Moller, CEO, told the EOEC. The system has been built and modeled at scale and now the firm is working with partners, Iberdrola, EMEC, Norwegian University of Science and Technology at Trondheim, and others, to put a 1:2 scale device in the water at Scapa Flow at EMEC. It is under construction at the moment, with dry rig testing, using hardline in the loop, due in Stockholm, before deployment in February to mid-2017.

Albatern is another second generation developer. The Scottish company has developed WaveNET, which uses an array of “Squid” generating devices, interconnected in a net type arrangement, which couples into a mooring system, to capture energy from the ocean surface.

The array comprises buoyancy Squid modules, each with three arms, which can link with other Squids. The Squid modules and their linking arms contain pumping modules, connected to a ballast riser, which is a node for a number of Squid units. Motion is converted to rotational movement by the pumping modules. Rotational movement is then converted to hydraulic energy through a geared hydraulic cylinder. A common hydrostatic transmission system collects the power from the pumping modules and feeds multiple power take off modules, converting the hydraulic power into electricity, which is combined before transmission to shore.

The net – which Albatern says is modular and so easy to transport and install – can be shaped to suit wave patterns, such as a wide net for low density sites, or deeper (longer) arrays for longer waves. David Campbell, commercial director, told EOEC that the notion is based on having a planar area with junctions so it is able to move.

In 2013, three 7.5kW WaveNET Series-6 Squid units were deployed for testing at Kishorn, Scotland, to provide power for a Marine Harvest salmon farm off the Isle of Muck. A six-unit deployment was carried out from August to early November 2015.

Another project is planned for the deployment of a six-unit project, for 18 months, in up 20m water depth with 0.3-6m wave height off Ardnamurchan, Scotland, using Series-12 units, at 75kW. Power from the deployment is also due to be used to power a fish farm site. The next step will be grid-scale Series-24 WaveNet arrays, with 750kW units, which could be turned into 100MW arrays by 2024, Albatern says.

Finnish firm AW Energy’s WaveRoller is a nearshore, shallow water wave energy device, based on a composite panel, or flap, which is moved by the motion of the waves, driving hydraulic piston pumps in a closed hydraulic circuit, feeding a hydraulic motor unit.

The design, a 3x100kW demonstrator of which was installed off Portugal in 2012-14, comes from Finnish diver Rauno Kolvusaari, who saw a plate moving on a shipwreck and thought the movement could be harnessed. Earlier this year, the firm’s latest power take off solution, for a 350kW commercial device, passed a six-month trial at WaveRoller’s test center in Finland ahead of being shipped for trials offshore Portugal, where AW holds a 1MW lease site.

Tuula Maki, R&D manager, told EOEC the unit can be deployed using a barge, with seawater ballast to the take it to the sea floor. Scale testing has been carried out on the device and the latest is rated at 500-1000kW with 25-50% capacity. The firm has had performance validation by DNV GL and also has a technology certificate by Lloyd’s Register.

Vancouver, Canada-based Mermaid Power also has a nearshore device, but in the form of a 100kW point absorber. Unlike others, however, the 3500kg point absorber, or motive float as Mermaid calls it, and power take off are housed in an accessible, 9m-wide, 7m-high, 12,000kg geodesic style dome supported on four semisubmersible buoys.

The dome constrains the point absorber to move vertically and supports the power take off equipment, described as a patented reciprocating to rotation motion converter, which delivers power to the electrical generator from up and down strokes, above the water.

The latest version of the device, the 25kW Neptune 3, was moored at Keats Island, Vancouver, in November last year. A Neptune 4 is being designed and Mermaid is looking for a site to test it.

These are just some examples of the many projects ongoing. And while much of the focus has been around Europe and Canada, Chinese firms have not been idle.

Dengwen Xia, vice director at China’s National Ocean Technology Center, outlined at EOEC a host of technologies on which Chinese firms are working; although some may look similar to some European technologies. Since 2005, more than 20 small scale prototype WECs have been developed and completed, he says, including 50kW flap style devices, oscillating water columns and point absorbers, with offshore tests in Guangdong, Zejiang and Shangdong.

The Chinese are looking to build devices that suit wave regimes there, which, he says, is different from areas, such as Europe. “We developed the different technologies to try to solve these issues that only the China Sea area has,” he says, highlighting the Guangzhou Institute of Energy Conversion’s (GIEC) Sharp Eagle Wanshan, which launched in 2015.

Sharpe Eagle Wanshan is a 36m-long, 24m-wide semisubmersible structure containing a wave energy device. Currently, the power capacity is 120kW, but this will be expanded, says GIEC. In addition, solar panels, wind turbines and desalination units could be installed on top of the device.

“In the next five years we will continue to improve WEC technology. We are hoping to use it for inhabited islands and offshore facilities such as deep sea fish farming, etc.,” Dengwen Xia told EOEC.

My WEC for a PTO 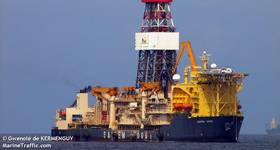