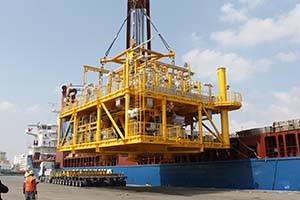 The CSP (conductor supported platform) topside, for the 2014-15 redevelopment, being loaded into the Industrial Force vessel at Sfax, Tunisia, for transportation to Cotonou, Republic of Benin. Photos from Aquaterra.

Zenith Energy has made an offer to the Republic of Benin operate Block 1 containing the "largest and most prospective oilfield in the country".

The shallow water block in the Gulf of Guinea contains the Sèmè oilfield, which was discovered in 1968 and produced for 14 years, but was shut-in in 1998.

Now, Zenith is seeking the award of an initial nine-year licence which would see it use existing infrastructure, installed in 2015, but never used, to reproduce the field.

Andrea Cattaneo, Chief Executive of Zenith, said: "We are delighted to have submitted this Offer for what is an extremely exciting opportunity in Benin, representing the largest and most prospective oilfield in the country.

Zenith says it will focus geological attention on developing the emerging Cretaceous Play along the West African coast. Zenith says this has proven to be a highly prolific basin extending from Côte d'Ivoire, Ghana to the West, to the east in Nigeria, with the large "Ogo" oil and gas discovery, as well as producing in the Aje field.

Sèmè was discovered in 1967 by Union Oil and is estimated to contain 22-28 million barrels of oil and 428 billion cubic feet of natural gas (Kerr McGee 2005) recoverable reserves.

It is reported to have 22 million barrels of oil to date, with a historical recovery factor of 22%.

To date, 23 wells have been drilled in Block-1, with the last well having been drilled in 2009 by South Atlantic Petroleum (SAPETRO). This well discovered oil, however, due to time (approx. US$30) it was d the prevailing oil price at deemed uncommercial.

Zenith says that, in recent years, there has been an attempt to revive domestic oil production in Benin following the previous involvement of various Western oil companies between 1984-1998, including the Norwegian Saga Petroleum.

It says that in late 2019, CNPC signed a construction and operation agreement with the Government of Benin for the construction of the Niger-Benin Crude Pipeline, a 1,980km cross-border crude pipeline connecting the Agadem Rift Basin (ARB) region in Niger to Port Seme Terminal in the Republic of Benin. Construction of the pipeline is underway and is expected to be completed by the close of 2023.

Benin is a founding Member of the African Petroleum Producers' Organization ('APPO'), and its Minister in charge of Hydrocarbons serves as Vice-President of the APPO.

It has a 171km-long coastline, which runs along the Gulf of Guinea between Nigeria to the east and Togo to the west. But, to date, the country has produced just one oil field, Sèmè.

In 2014, there was a bid to bring it back to life, with the help of a conductor supported platform (CSP). But low oil prices deemed the project uncommercial.

The existing infrastructure consists of three platforms, one well head and two production facilities. The field produced 7627 boe/d at its peak in 1984, but, at the lowest in 1997, just before abandonment, it was delivering only 1207boe/d, due to high water cut.