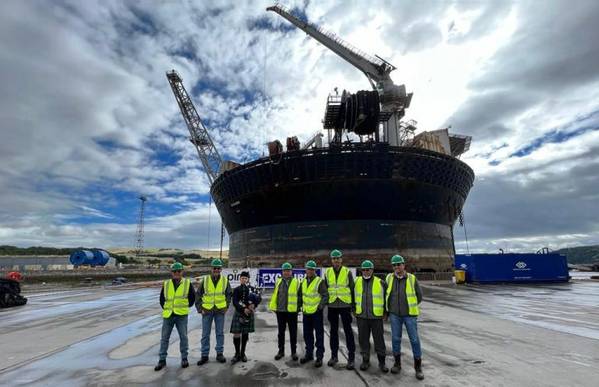 Representatives from DNeX and Ping in front of newly renamed FPSO to Excalibur. Photo from DNeX.

Previously known as the Sevan Hummingbird, the renaming ceremony was recently held in Port of Nigg, Scotland, where the FPSO recently arrived for an estimated 12-month upgrade program.

Yesterday, Cerulean Winds and Ping Petroleum UK announced they had agreed to create one of the UK’s first offshore oil and gas facilities powered mainly by offshore wind at its Avalon field development, which will utilise the newly renamed Excalibur.

The news came just a month after it was announced that FPSO owner and operator Teekay was to sell the Sevan Hummingbird, a Sevan-design cylindrical FPSO, to Ping. A final investment decision is expected later this year.

Tan Sri Syed Zainal Abidin Syed Mohamed Tahir, Group Managing Director of DNeX, said, “We are proud to be the new asset owner and ready to progress in our maiden greenfield upstream project, starting on a clean slate in line with DNeX’s and Ping’s growth strategies. Representation from DNeX being present at the event demonstrates the Group’s continued commitment in this project. DNeX and Ping are upbeat about the prospect of Avalon Development."

He said the next step is to retrofit the FPSO with electrification capability, supported by a dedicated floating offshore wind turbine that is purpose-built for the Avalon’s requirement.

“The Excalibur can set the benchmark for a greener upstream operation with the deployment of a wind turbine technology that powers the entire production facility. This is a significant milestone for the Avalon Development and timely as we progressively move forward with the energy transition,” he said.

First commissioned in 2008, the Excalibur is 60 metres in diameter with a storage capacity of 270,000 barrels of oil. It can produce about 25,000 barrels per day, supported by up to 47 offshore personnel.

Global E&C conducted a preliminary front-end engineering and design (pre-FEED) for the FPSO earlier in 2022. This includes work to enable it to receive power from a floating offshore wind farm. The proposed development concept allows Ping to expand and diversify its portfolio of producing assets in full compliance with the UK’s production and emissions-reduction targets.

Avalon is a legendary island featured in the Arthurian legend and the place where King Arthur's sword Excalibur was made.