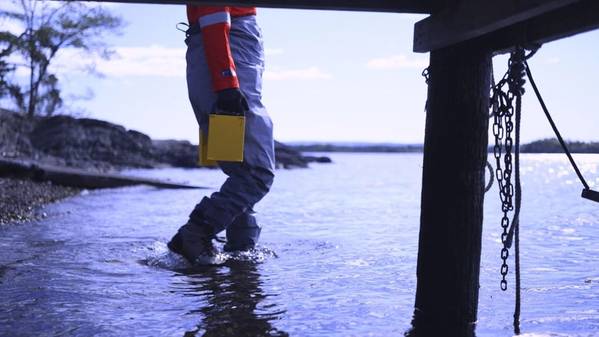 According to Shearwater, the Pearl node offers a new standard for time and cost efficiency which expands the potential ocean bottom seismic market, enabling solutions to geoscience challenges that were previously not possible.

Massimo Virgilio, CTO of Shearwater, said: “Pearl is the lightest, smallest, and smartest node ever developed. The technology combination it is packed with is an industry first, including fully wireless charging and data handling, battery life exceeding 150 days, and best in class MEMS sensors. Solving our clients’ geoscience challenges through technology and cost innovation is a strategic priority for Shearwater. We have set out to remove the constraints our clients say they experience for ocean bottom seismic projects, not in increments but in a significant leap forward.”

Irene Waage Basili, CEO of Shearwater, said: “Shearwater today is a trusted partner across all disciplines of marine seismic acquisition markets, including the seabed market. We have already challenged efficiency boundaries in ocean bottom operations in deep water in several basins and methodologies.

"We were the first to deploy triple sources and multiple ROVs to beat the cost curves to the benefit of our clients. Now, with Pearl, we present our clients with a dramatic opportunity to perform ocean bottom surveys that were previously thought impossible due to time and cost. We aim to change the rules of ocean bottom seismic.”

According to Shearwater, Pearl’s small size and low weight allows for wider and denser spreads reducing operational time by a third compared with current deployments.

“Smaller size also means surface vessels and subsea vehicles can carry substantially more nodes for deployment and makes large volumes of nodes easier to ship around the world. The Pearl node is flexible and can be used in deep and shallow water depths and may be applied across a wide range of activities from exploration and production seismic to capturing geophysical data for carbon storage and in new energy markets,” Shearwater said.

According to the company, Pearl has the longest battery life of any node, with over 150 days of continuous recording, removing the need to retrieve nodes to recharge or replace batteries during surveys.

“This is the first fully smart node and including multiple methods of wireless communication and GNSS. There are no cables making Pearl a fully wireless node for both data retrieval and charging, removing the need for complex connections and battery unit replacement onboard. Pearl is designed with automation in mind, in both handling and deployment,” Shearwater said.

“The multicomponent node design combines hydrophones with tri-axial microelectromechanical system (MEMS) accelerometers. The MEMS sensors measure the full bandwidth of the seismic wavefield, down to the lowest frequencies with industry-leading recording quality which makes the Pearl node a perfect match to future technologies like Shearwater’s Harmony source or marine vibroseis,” the company explained