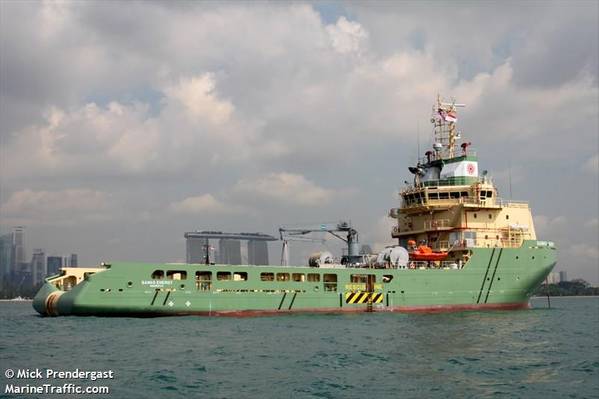 On that theme, it appears a vessel very close to my heart, the AHTS previously known as Sanko Energy (now Ena Shogun), has come 'all the way back around.'

News is filtering through the market that Eastern Navigation (Singapore) has sold the vessel five years after purchasing it from Sanko Steamship in early 2017.

So why does this vessel resonate with me? Well, from a professional perspective, it was my first analyst experience of a sale that went against everything established market experts thought about values and sale prices. It also set off a chain reaction for other distressed AHTS sales, truly illustrating how poor the offshore market was, and many point-blank ignored or refused to accept the situation.

In January 2017, Sanko Steamship was keen to exit the troubled offshore market and therefore took the executive decision to sell its remaining AHTS vessels - the Sanko Energy (16,315 blt 2011 Keihin), Sanko Brilliance, and Sanko Baron (12,228 blt 2009 Keihin). First up for sale, and the subject of this article, was the Sanko Energy AHTS.

Many within the industry described this reduction as a one off, a sale to be ignored and not representative of the actual market. Others blamed the unit's lower specifications: the fact the Japanese had written the book value down to zero, its poor fuel consumption, or because it was considered a forced bank sale. In any case, the vessel was sold to Eastern Navigation (Singapore) for USD 5.8 million. The day before the sale, VV valued the vessel at USD 6.8 million.

In any softening market, there is always one defining sale where the achieved price is often a lot lower than the market perception. In our case, it was the Sanko Energy. However, we must remember that VesselsValue is a transactional-based model, and we cannot base ourselves on one data point alone. So, when the en-bloc sale of 11 Very Large AHTS for USD 75 million from suffering Hartmann Offshore to Breakwater Capital occurred, it supported our valuations and reinforced these new prices were not a one-off or something to be ignored. Sales are outlined in table below and associated VV values.

Credit: VesselsValue What goes around, comes around

Recent market rumors suggest that Eastern Navigation Singapore has sold the Ena Shogun for USD 13 million to Chinese interests likely to be engaged in the Chinese domestic offshore renewables market. VV value for the vessel today is USD 10 million. This represents a USD 7.2 million cash gain from their original investment of USD 5.8 million in 2017.

There are a few offshore owners who can claim to have made those figures on asset play over the last 5 years. Eastern Navigation timed the market perfectly, both from a purchasing and selling perspective. The cherry on top is that Eastern Navigation has been working the vessel at various intervals since purchase, and thus generating positive cash flow - likely with a lot lower debt levels, if any, compared to their fellow offshore owners who built or bought at the peak of the market.

The vessel's most recent major project was from December 2019 to May 2021 for Lantana Services Sdn Bhd. Ena Shogun primarily supported semi-submersible drilling rigs for a Bruneian oil company under a one-year contract that contains options for additional work. The vessel was managed by Vroon Offshore Services Singapore.

Both these sales caused a firming in asset value when they occurred, and the recent sale of the Ena Shogun will be fed into the VV model and values will increase accordingly.

The consensus is the large AHTS sector is tightening, and the number of available large AHTS units is quickly diminishing, while inquiries are increasing. This sudden tightening is a product of vessels being sold out of the offshore sector, thus reducing overall fleet numbers, China purchasing large numbers of vessels to service their growing renewables market, and a lack of any meaningful newbuild orders since c. 2014.

Finally, larger owners have sent significant numbers of older AHTS assets to the demolition yards as part of their overall fleet renewal program, i.e., Tidewater and Solstad. Market rumors suggest that several owners are increasing their asking prices for large AHTS based on all the above.

VesselsValue expects the large AHTS market and values to continue firming throughout 2022, and it looks like it could be a pivotal year for the sector. After 5 years of low asset values and distressed market conditions, many within the industry will certainly be hoping that ‘what goes around, does indeed come all the way back around' and finally see some positivity returning to the market.