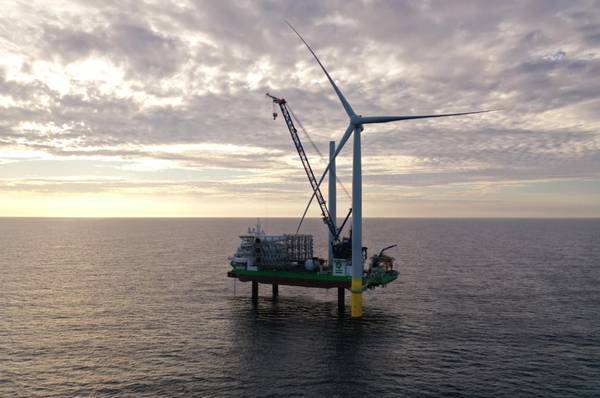 Offshore wind farm developer Ørsted will divest a 50% stake in its 1.3 GW Hornsea 2 offshore wind farm in the UK to a consortium comprising AXA IM Alts, acting on behalf of clients, and Crédit Agricole Assurances.

Hornsea 2 is currently under construction and will become the world’s largest offshore wind farm once commissioned later in 2022.

The total value of the transaction is GBP 3 billion (around $3,94 billion) and the transaction is expected to close in the second half of 2022 once the wind farm is fully commissioned and customary regulatory approvals are obtained.

AXA IM Alts and Crédit Agricole Assurances will then each own 25 % of the project. The investors’ 50 % stake in Hornsea 2 will be funded through a combination of equity and a senior multi-tranche staple financing package provided by 30 banks and including a covered tranche guaranteed by EKF, Denmark’s export credit agency. The financing package was originated and structured by Ørsted.

Spanning an offshore area of 462 km², Hornsea 2 is currently under construction 89 km off the Yorkshire coast in the Hornsea zone. Once complete, it will take Ørsted’s installed capacity in the UK to over 6,300 MW. The wind farm generated first power on December 20, 2021.

Once fully commissioned, with a capacity of 1.3 GW, Hornsea 2’s 165 8 MW Siemens Gamesa wind turbines will provide enough electricity to power the equivalent of more than 1.3 million homes annually.

"Ørsted is finalizing the construction of the project and will provide long-term operations and maintenance (O&M) services for 20 years from its O&M base at the Port of Grimsby, the largest such base for offshore wind farms in the world. Furthermore, Ørsted will provide the incoming partners with balancing services and a long-term route to market for the renewable electricity generated from Hornsea 2," Ørsted said.

Duncan Clark, Head of Region UK at Ørsted, said: “We’re very much looking forward to working with our new partners and continuing to support the UK’s commitment to decarbonise electricity by 2035. Ørsted has invested more than GBP 14 billion in the UK to date, and when Hornsea 2 becomes fully operational later this year, our wind farms will be supplying over 7 % of Britain’s electricity.

"We’re now focused on helping the UK deliver on its 40 GW and Sector Deal target for offshore wind by 2030, a significant milestone in the energy transition that will deliver more than GBP 60 billion of investment for the UK while supporting the UK’s world-class offshore wind supply chain and more than 40,000 jobs over the next few years.”