Building a New Fleet: CTVs for US Offshore Wind 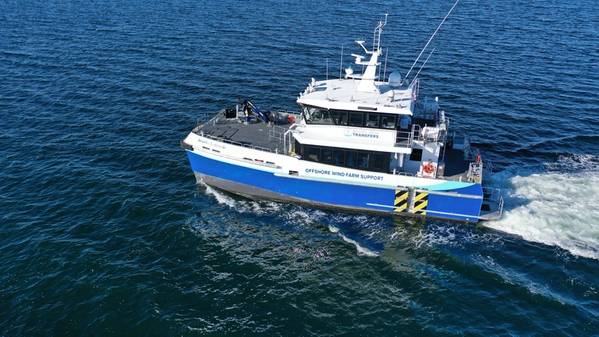 The U.S. has big plans for its offshore wind industry, and shipbuilders like Blount Boats and others are ramping up to capitalize on the unprecedented opportunity.

Earlier this year, the Biden Administration unveiled its goal to have 30 gigawatts (GW) of offshore wind power installed and in development in the U.S. by 2030. The announcement, which included plans to open new areas to development, accelerate permits and boost public financing for projects, injected a healthy dose of optimism into an American offshore wind industry that has taken its time getting off the ground.

To date, just 42 megawatts (MW) of capacity has been installed in U.S. waters, including 30 MW at the Block Island Wind Farm and 12 MW at the Coastal Virginia Offshore Wind project, but there’s plenty more in the pipeline.

“The White House statement refers to about 18-19 GW installed by 2030, and that's fairly consistent with what we are forecasting as achievable,” said Phil Lewis, director of research at World Energy Reports. “The conditions have been put in place to deliver a big lump of offshore wind power into the U.S. East Coast. And that 30 GW target is all about the Mid-Atlantic and the Northeast. There's a longer term objective of 110 GW by 2050, and the pipeline's already in place to start to identify that.”

Lewis went on to add, “The federal government is planning additional offshore sites to be made available in the North, Mid- and South Atlantic, the Pacific initially off California and later of Hawaii and Oregon and also in the Gulf of Mexico. The state administrations will also be supporting project development, both nearshore Maine and California and in the Great Lakes.”

Maritime players in the U.S. and abroad are aligning themselves to capitalize on the large and newly emerging opportunities that America’s nascent offshore wind industry presents. In particular, U.S. shipbuilders and the supply chain that supports them are jockeying to build and equip a new fleet of vessels that will be required to install, service and eventually decommission wind turbines along the U.S. East Coast.

Crew transfer vessels (CTV)—typically aluminum catamarans used to ferry personnel and light equipment to and from offshore wind farms—are among the Jones Act-compliant vessels that will be needed to build and service America’s new offshore wind industry. Maximum range for these vessels is practically about 50 kilometers, Lewis said. Anything further from shore would require larger vessels and/or helicopters.

Warren, R.I. shipyard Blount Boats, builder of America’s first ever CTV for the Block Island Wind Farm in 2016, has emerged as a true leader in this space, having built two of the three U.S.-flagged CTVs currently in operation, and with a recent order in hand to construct four more.

Key to Blount’s success has been its foresight in committing to this sector in its earliest days, as well as the shipyard’s reputation for quality, according to Blount Boats’ president, Marcia Blount. “For 11 years we have been deliberately pursuing contracts for crew transfer catamarans which are the perfect size, length and draft, for our yard,” Marcia Blount said. “We watched Cape Wind self-destruct but believed that ultimately many windfarms were going to be developed off our coast. We attended and exhibited at every wind farm conference and networked extensively. We were in the right place at the right time to convince decision-makers at Deepwater Wind that they needed a ‘purpose-built vessel’. At that time many thought stern fenders could be added to existing ferries to create instant wind farm vessels.” 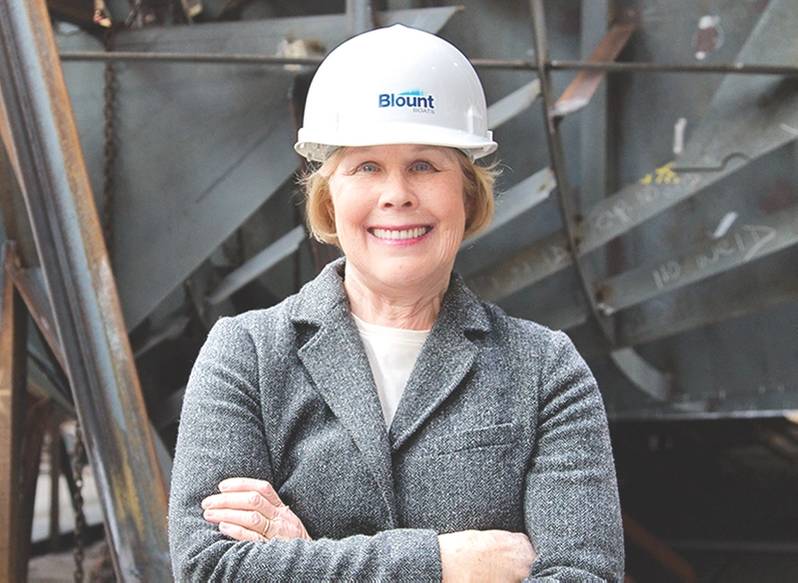 “The two CTVs that we have built have performed flawlessly. It’s one thing to get contracts but another to ensure quality and dependability which Blount has been doing since 1949,” said Marcia Blount, president of Blount Boats. (Photo: Blount Boats)

How many CTVs need to be built?
Currently, there are only three Jones Act CTVs in service in the U.S., including Atlantic Wind Transfers’ (AWT) Atlantic Pioneer and Atlantic Endeavor delivered by Blount in 2016 and January 2021 respectively, and WindServe Marine’s WindServe Odyssey built by Senesco Marine in North Kingstown, R.I. and delivered in 2020.

“As of now, CTV orders have been awarded only for the few specific tenders put out by the wind farm developers. Many vessels will be needed if all leased areas are developed, but to date CTVs are not being built on spec in anticipation of demand, perhaps because of complexity and price,” Marcia Blount said.

The relatively small number of orders booked to date could pose a challenge as project approvals accelerate. "If all these projects get approved quickly, a lot of boats will need to be built quickly." Lewis said, emphasizing possible pressure on an already stressed shipbuilding supply chain. 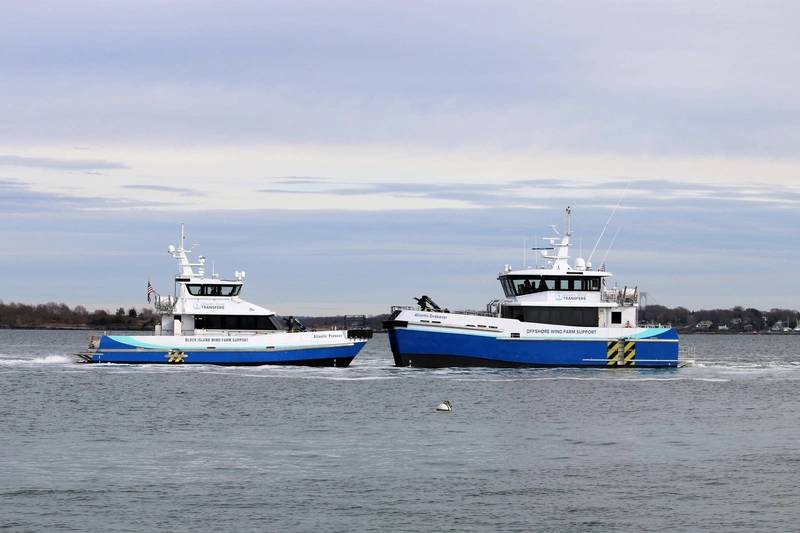 In the years ahead, it's expected that dozens of CTVs will be built as part of a new fleet of Jones Act compliant vessels required to support the construction and long-term service of new offshore wind farms. “The market for CTVs is going to split into two demand drivers. First there’s construction and commissioning, and then there’s operation and maintenance,” Lewis explained.

For the construction/commissioning phase, Lewis said developers are discussing using multiple CTVs—potentially nine-10 depending on the project—but determining the final number of vessels needed isn’t as simple as adding up the number required for each project. The construction phase only lasts a few years at most before the CTVs move on to the next project, so the contracts will be shorter term, more on a spot chartering basis. In addition, Lewis said developers will likely cluster projects based on timelines and location so that assets such as CTVs can be shared across multiple projects in a more cost-effective manner.

“You can’t take 25 projects multiply by nine or 10 and say the market is going to be over 200 crew transfer vessels because they're going to go from project, to project, to project. So, there might be a core 20-40 vessels that are spread around East Coast construction support,” Lewis said.

The cluster approach will carry over into the projects’ decades-long operation/maintenance phases. Lewis and World Energy Reports have identified nine clusters among the 25 planned projects currently in the pipeline. 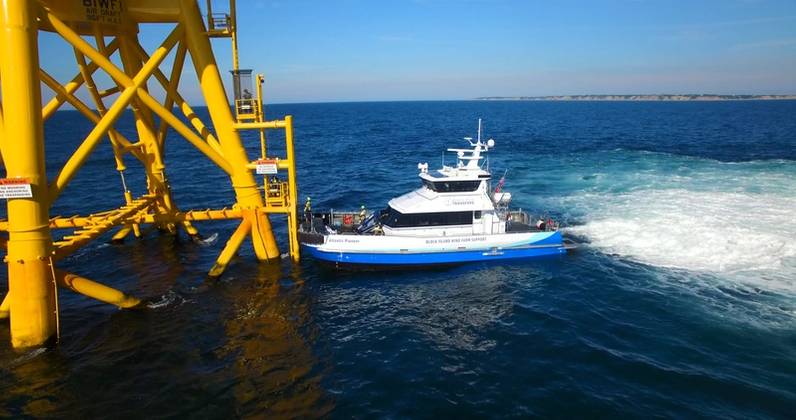 But unlike for construction/commissioning, CTVs for operation/maintenance will be chartered for longer periods of time on a project basis. “Once a wind farm is up and running, it’s operated for 25-30 years before the sea space is handed back to the government. Maintenance crews will need to be sent out there all the time over the 30 years,” Lewis said.

“It's conceivable we could see 50-70 CTVs on the East Coast in the Mid-Atlantic and Northeast, but I can't say with any certainty that it will be 50 long-term crew transfer vessels. I think there'll be 30 to 40 definitely long term; you're just going to need those. But I can imagine there's another 20-40 that are going to be available on a spot basis,” Lewis said.

Lewis added that CTV operational efficiency will demand “a certain economy of scale”, with a mix of boats on long-term charter and others in the spot market to cover dry dockings or mechanical problems. “In the Gulf of Mexico’s crew transfer market for the oil and gas industry, if a boat goes down, you just pick up a phone to A, B and C and say, ‘Do you have a boat available?’ There's always surplus capacity because of the volume,” Lewis said. “At the moment, there is no surplus capacity for U.S. offshore wind CTVs. And to be successful, as is seen in the European model, you need to have companies that build fleets of five, 10 boats.” 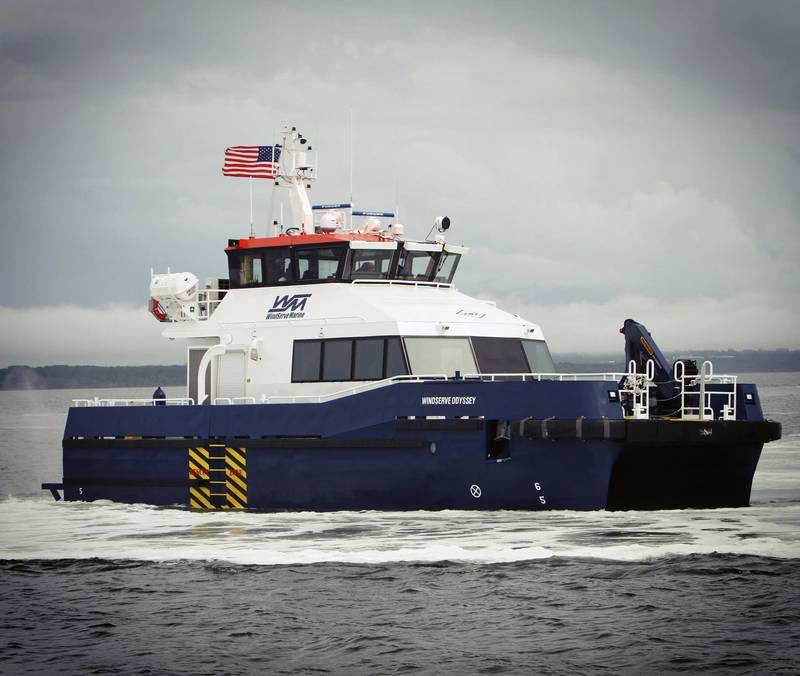 Who can build them?
“Currently Blount can build about two CTVs per year,” said Marcia Blount, noting that aluminum requires vessels be built under covered space. “Blount has plans to construct another large hull shop in the near future which will increase production to four vessels per year.”

In addition to Blount and Senesco, other established shipyards are also expected to enter the U.S. CTV arena. In 2020, the Netherlands-based Damen Shipyards Group said a version of its Fast Crew Supplier 2710 CTV modified for the U.S. market received approval in principle (AIP) from ABS. A U.S. builder could then construct the design under a licensing agreement.

A number of yards along the U.S. Gulf Coast with a deep history building crew boats for the oil and gas industry, and even aluminum builders on the West Coast, could feasibly begin supplying CTVs for offshore wind. For the past several years, U.S.-based SAFE Boats has been working with U.K.-based Diverse Marine promoting SAFE Boats designs in European markets, and in August it was announced that companies entered a formal partnership agreement to brings Diverse Marine’s CTV designs and experience to the U.S.

But shipyards like Blount in the Northeast and Mid-Atlantic will probably score most of the initial CTV orders given their proximity to planned projects and the “local content” preferences built into many of the developments. In October, Gladding-Hearn Shipbuilding/Duclos Corporation in Somerset, Mass. said it secured an order to build an Incat Crowther-designed CTV for U.S. offshore wind farm developer Mayflower Wind. “With our location and experienced team at Gladding-Hearn, we are ready to serve the offshore wind market. We’ve been working to make it happen since the early days of Cape Wind. We’re glad to finally see it come to fruition with Mayflower Wind,” said Peter Duclos, president of Gladding-Hearn. 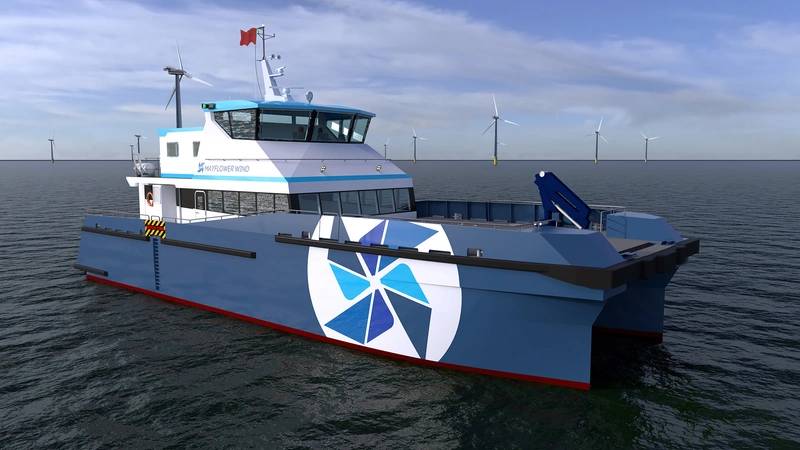 Blount Boats in November announced it secured an order to build four more CTVs for the new market entrant American Offshore Services (A-O-S), jointly owned by U.S.-based marine services firm SEA.O.G Offshore and European CTV operator Northern Offshore Services (N-O-S). A-O-S' newbuilds will immediately go to work upon delivery in 2023 and 2024. The company said it has secured its first U.S. contracts to provide CTVs and equipment during the construction of four different wind farms from the second quarter of 2023.

In the more established European market, where many CTVs have been used to service offshore wind farms for decades, operators are increasingly looking toward cleaner burning, more efficient power and propulsion solutions to limit environmental impact. This trend is expected to carry into other global markets, including the U.S.

A-O-S' new 99-foot G-class aluminum catamarans are based on the N-O-S D-Class design, and they will feature the Volvo Penta IPS propulsion system, which is readily upgradeable to hybrid at any time in the future. “The vessel has been designed and planned with the space reserved for all the required components which will simplify the work and time needed to accomplish this future upgrade,” Blount said. “Wind farm developers are interested in incorporating green energy on the vessels as much and as soon as possible. Hybrid/electrification is one of the options.” 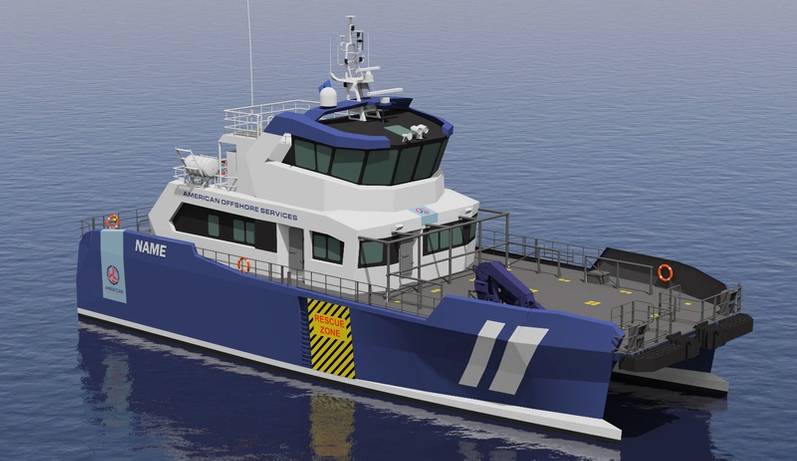