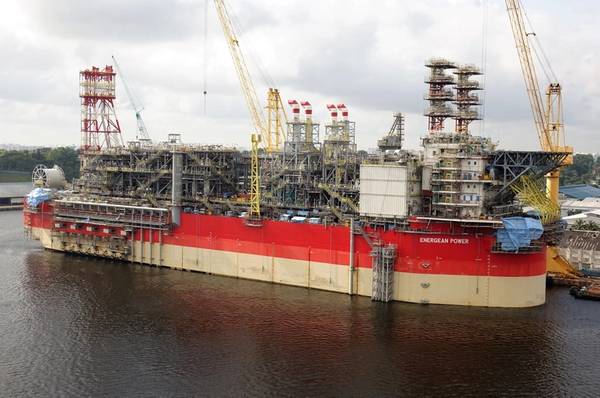 While Energean said Wednesday the gas production start-up from the Mediterranean Sea gas field „remains on track“ for mid-2022, it's worth noting that this date was introduced earlier this year when Energean said it wouldn't be able to meet the previously set start-up date of Q4 2021 due to delays with work on the FPSO in Singapore.

Given that the company has signed several gas offtake deals for the project and that the gas deliveries have been delayed, Energean during August 2021 agreed to pay compensation to gas buyers due to the fact the gas supply date is taking place beyond a certain date as defined in gas offtake deals signed.

Energean said at the time that the compensation would be paid on a monthly basis starting on August 2021 „and is estimated at approx. US$23 million.“

The company also said at the time that a gas buyer had sent a request to the International Court of Arbitration (“ICC”) asking for arbitration on its rights of termination due to the fact the gas supply date is taking place beyond a certain date which defined in the GSPA.

In a statement on Wednesday, Energean revealed that the buyer in question was Dalia and that, further to its start of arbitration proceedings in August 2021, Dalia served a notice of termination to Energean purporting to terminate the gas sales and purchase deal which represents 0.8 Bcm/yr of contracted gas sales. The parties signed gas sales and purchase agreements in May 2017.

"It believes that it was served in breach of Dalia's obligations under the contract.  Energean will vigorously pursue all rights at its disposal,“ Energean said.

Energean said it has identified multiple incremental buyers, both domestic and international, for its gas reserves and prospective resources and "is confident of selling all volumes profitably."

According to information on Energean’s website, total firm gas sales and purchase agreements signed so far, including the one with Dalia, amount to 7.4 bcm/yr.

In an operational update on Wednesday, Energean said that the Karish project was 91.8% complete, with the Energean Power FPSO 97,3% complete.

The FPSO, dubbed the critical path item in delivery of first gas, is expected to sail away from Singapore to Israel in 1Q 2022. This journey will take around 35 days. Hook-up and pre-first gas commissioning will then take approximately three months, with the first gas from Karish expected in mid-2022.