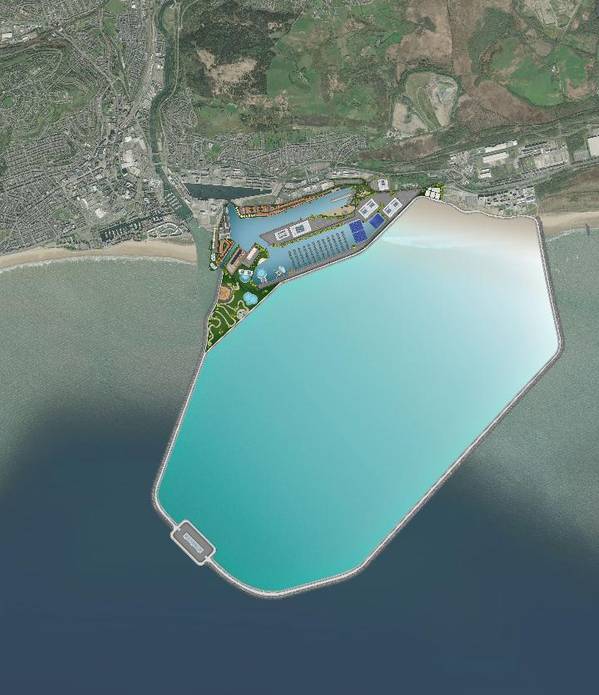 A project worth £1.7 billion (around $2,3 billion) that includes a giant tidal energy lagoon and floating solar array has been proposed for Swansea's waterfront, in Wales, UK,  by DST Innovations and a number of business partners, with support from Swansea Council and Associated British Ports.

The project will include a newly-designed tidal lagoon, featuring underwater turbines generating 320 megawatts of renewable energy from the 9.5km structure. The lagoon is part of the larger proposed Blue Eden project. Blue Eden is planned to be delivered in three phases over 12 years.

The Swansea authorities said in a statement that the project will also include:

According to a press statement released Monday, Blue Eden will create over 2,500 permanent jobs and support a further 16,000 jobs across Wales and the UK, while creating additional jobs during its construction.

Renewable energy produced on site is planned to power the entire Blue Eden development, including businesses and a mixed development of affordable housing, assisted living areas, and luxury apartments.

"Due to the innovation on-site, each home will have up to 20 years' renewable energy and heat provision included with the sale of the properties," the press statement further reads.

Tony Miles, Co-founder and Chief Executive of DST Innovations, said: "Blue Eden is an opportunity to create a template for the world to follow - utilizing renewable energy and maximizing new technologies and thinking to develop not only a place to live and work, but also to thrive."

The project has been developed following discussions based on a vision put forward by a regional task force led by Swansea Council.

Cllr Rob Stewart, Swansea Council Leader, said: "We are aware now more than ever of the need to develop renewable energy supplies to provide sustainable and affordable electricity to families and businesses.

"Blue Eden will put Swansea and Wales at the cutting-edge of global renewable energy innovation, helping create thousands of well-paid jobs, significantly cut our carbon footprint and further raise Swansea's profile across the world as a place to invest.

"I'm delighted that an international consortium led by a Welsh company has developed our Dragon Energy Island vision into a ground-breaking project that delivers so many benefits and builds on the council's ambition to become a net-zero city by 2050.

"This project truly is a game-changer for Swansea, its economy and renewable energy in the UK, and crucially it can be delivered without the need for government subsidies."

Subject to planning consent, Blue Eden work on site could start by early 2023.