Despite Preparation, California Pipeline Operator May Have Taken Hours to Stop Offshore Leak 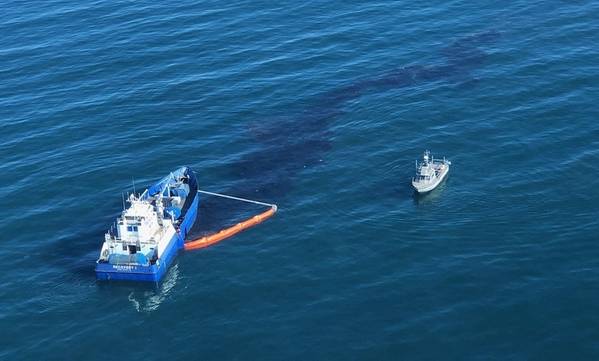 The company that operates the pipeline that spilled an estimated 3,000 barrels of oil into the Pacific Ocean off California has an 800-page manual on handling an oil spill - but it is unclear whether its employees followed those procedures.

Houston-based Amplify Energy Corp and several state and federal regulatory agencies have provided differing accounts of what happened on Oct. 2, when the pipeline spill that fouled beaches, killed wildlife, and closed down fishing along miles of coastline was officially reported.

The U.S. Pipeline and Hazardous Materials Safety Administration (PHMSA) said Beta Offshore, an Amplify subsidiary that operates the pipeline, received a low-pressure warning in its control room about 2:30 a.m. Pacific time (5:30 a.m. EDT) on Oct. 2, a sign of a rupture in the line.

The leak-detection alarm should have triggered rapid phone calls to managers, boat crews, regulators, and the U.S. Coast Guard, and swiftly set in motion steps to shut down the pipeline and platform that feeds it, according to 10 former and current Beta Offshore employees and contractors, as well as a copy of the company's spill response plan reviewed by Reuters.

But the San Pedro Bay Pipeline wasn't shut down until 6 a.m. Pacific, about three and a half hours later, according to PHMSA's timeline.

Amplify CEO Martyn Willsher has said the company was not aware of the spill until mid-morning.

"We were not aware of any spills until 8:09 a.m. (Pacific) on Saturday morning," he said at a news conference on Wednesday. He noted that the line was shut off about 6 a.m., but did not explain why or for how long, adding: "We were not pumping oil at 8:09 a.m. when we actually discovered oil on the water."

In response to a reporter's question on Wednesday about the 2:30 a.m. alarm, Willsher said: "We were not aware of any alarm at 2:30."

He also said the company was investigating the timeline and "working with regulators to see if there was anything that should have been noticed."

Tom Haug, a third-party contractor who is listed as an Incident Commander in the response plan, referred questions to Amplify's official spokesperson.

The 16-inch diameter, the 17-mile-long pipeline runs from Amplify's Elly oil production platform offshore to Long Beach, where the oil is stored and transported for refining.

The spill's volume is minuscule compared with others that have sparked regulatory change, such the 2010 Deepwater Horizon rig explosion in the Gulf of Mexico, which released more than 5 million barrels of oil into the water.

Still, it raises questions about the effectiveness of government-mandated spill response plans, which are meant to ensure companies react quickly to minimize pollution and public hazards.

The cause of the California spill is under investigation. Officials are probing whether the rupture may have been caused by a strike from a ship's anchor. Investigators discovered a section of the pipeline had moved 105 feet and had a 13-inch split running parallel to the pipe.

Residents and nearby vessels have said they first noticed foul smells and a sheen on the water on Friday evening, according to the U.S. National Response Center, the designated point of contact for environmental accidents. The U.S. Coast Guard has said reports of this type are common, however, and do not always indicate a spill.

"In General - For Spill Response - Do Not Delay. Plan Ahead. Over-respond and stand down if necessary. Do not get behind on the curve,” Amplify's response plan says, in laying out a 15-step action plan for reacting to spills.

Amplify produced 3,600 barrels per day at its platforms in California in the second quarter of this year, making it the second-largest offshore producer in that state.

Federal regulators mandated in 1994 that operators be trained to shut off pipelines and platforms in the event of a leak or rupture. Former Amplify employees say the company had conducted such training in the last two years.

Amplify did not confirm whether those efforts had continued during the COVID-19 pandemic. But records from the California Office of Spill Prevention and Response show Beta conducted a drill virtually using the Microsoft Teams platform last year. Another was scheduled for next month.

Software made specifically for the platform monitors the status of pressure at pumps along the pipeline, two former employees said.

Sensors on the pipeline can notify an operator on the Elly platform if pressure changes, triggering an immediate shutdown and halting the flow of crude into the pipeline.

"After they detected a single barrel, the pipeline should have shut," said a former employee familiar with the line's operations.

Willsher said this week that Amplify's employees monitored the pipeline by boat weekly. The company reviews the chemical properties of the oil to ensure iron levels are not high, which would indicate a pipe's deterioration, another former employee familiar with the procedure said.

A third former employee recalled that U.S. Bureau of Safety and Environmental Enforcement (BSEE) inspectors frequently visited the platform and reviewed its pipeline connections. The inspections were meticulous and lasted weeks, and citations were issued for even the smallest items, such as corrosion on a handrail, one employee recounted.

Inspection reports two years ago determined that the pipeline was sound and that anomalies in the metal walls detected in past inspections had been remedied, according to a summary of an inspector's report from October 2019, filed with the BSEE in April 2020.