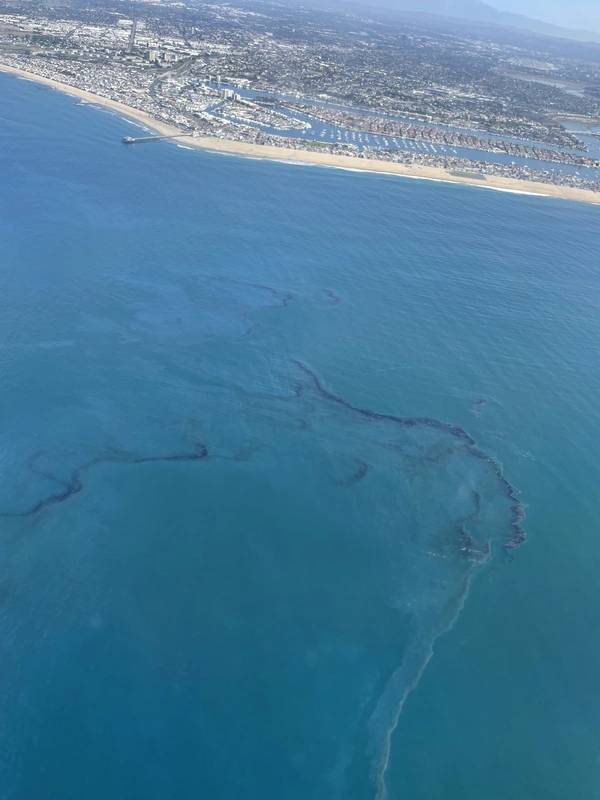 Crude oil is shown in the Pacific Ocean offshore of Orange County, Oct. 3, 2021. A unified command has been established to respond to and clean up the oil spill off the California coast. Official U.S. Coast Guard photo.

The U.S. Coast Guard, heading a clean-up response involving federal, state, and city agencies, said on Sunday there was an around-the-clock investigation into how the spill occurred.

An estimated 126,000 gallons, or 3,000 barrels, had spread into an oil slick covering about 13 square miles of the Pacific Ocean since it was first reported on Saturday morning, said Kim Carr, the mayor of Huntington Beach, at a press conference.

She called the spill an "environmental catastrophe" and a "potential ecological disaster". The beachside city, about 40 miles (65 km) south of Los Angeles, was bearing the brunt of the spill.

Carr added: "Our wetlands are being degraded and portions of our coastline are now covered in oil."

The spill was caused by a breach connected to the Elly oil rig and stretched from the Huntington Beach Pier down to Newport Beach, a stretch of coast popular with surfers and sunbathers.

Carr, in her remarks, added: "In the coming days and weeks we challenge the responsible parties to do everything possible to rectify this environmental catastrophe."

Amplify Energy CEO Martyn Willsher said at a press conference in Long Beach that the pipeline had been shut off and the remaining oil suctioned out. He said divers were still trying to determine where and why the spill occurred. 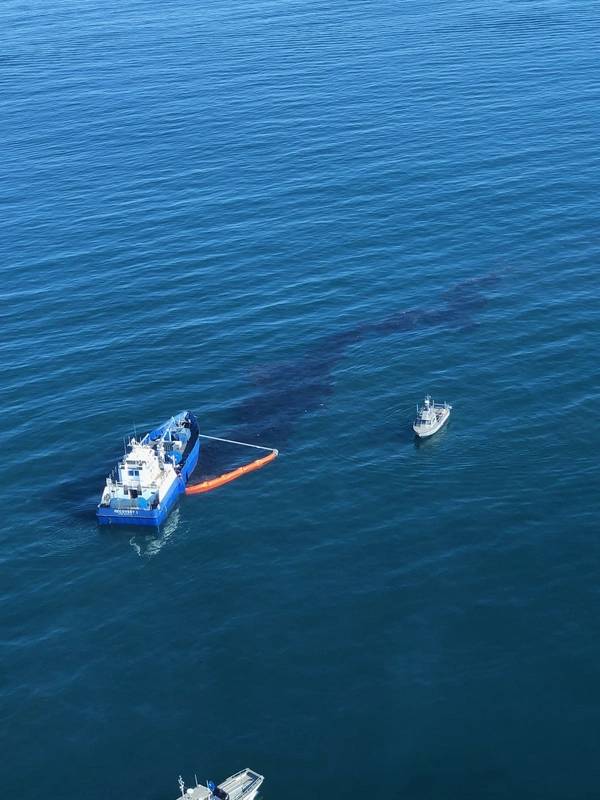 Crude oil is shown in the Pacific Ocean offshore of Orange County, Oct. 3, 2021.

A unified command has been established to respond to and clean up the oil spill off the California coast.

U.S. Representative Michelle Steel, a Republican representing part of the affected area, sent a letter to Democratic President Joe Biden requesting a major disaster declaration for Orange County, which would free up federal funds to help with the clean-up efforts.

Steel later told CNN: "This is a really serious disaster".

Cottie Petrie-Norris, a Democratic state assembly member representing some areas affected by the spill, said she had "huge concerns" about the extent of the damage to the environment, communities, and local economy.

She told CNN the spill was a "call to action that we need to stop drilling off our precious California coast."

Oil production off California's coast has declined sharply since its peak in the 1990s, in part due to the state's strict environmental rules. Democratic Governor Gavin Newsom said he wants to end oil drilling in the state by 2045.

Offshore drilling was restricted in the state after a devastating 1969 oil spill off the coast of Santa Barbara that dumped 80,000 barrels into the ocean. More recently another spill off Santa Barbara in 2015 sent as much as 2,400 barrels onto the shore and into the Pacific.

Oceana, an ocean conservation group, also called for an end to offshore oil and gas drilling.

Jacqueline Savitz, Oceana's chief policy officer, said in a statement: "This is just the latest tragedy of the oil industry. It's well past time to prevent future oil spills by permanently protecting our coasts from offshore drilling."

The spill occurred in federal waters. Officials said federal, state and city agencies were involved in a response headed by the U.S. Coast Guard.

Beaches were closed to swimming and a local air show was canceled, although some people were undeterred from setting up chairs on the beach to enjoy a sunny Sunday or strolling along the pier.

The U.S. Coast Guard, working with local and state agencies, flew airplanes to assess the spill and had hired contractors to clean it up.

Officials said they were investigating the cause of the spill and the type of oil involved.