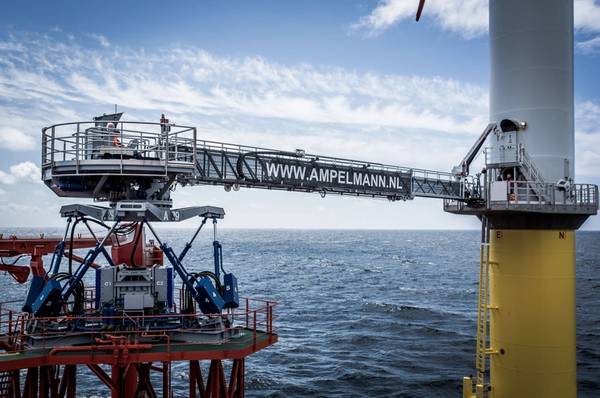 Ampelmann said it was able to secure this project with the support of its local partner in the region Leading Marine (HK) CO. Limited.

"In line with the need for a global energy transition, many governments have set ambitious targets for generating green energy, and so has China. In the Guangdong area, where the project with Ampelmann is located, China plans to install 10GW by 2030, which is part of the plan to achieve 40GW nationwide by that same year," Ampelmann said.

By the end of October 2021, Ampelmann will provide the A-type on the client’s new 60m Service Operation Vessel (SOV) named “MV Guang An Yun Wei 88”. It will be first the SOV equipped with a motion-compensated gangway in China.

The system will enable transfer of personnel at Guangdong Yangjiang offshore Wind Farm, which is the largest wind farm in Guangdong and is located 40 nautical miles offshore where turbines will be installed at a depth of around 40m.

Guangdong Safety New Energy is a wholly-owned subsidiary of Guangdong Yuean Shipping. Their venture with Ampelmann will be for a minimum period of six months and could possibly be extended for another half a year. The project will mark Yuean’s first step in the offshore wind operations and maintenance sector. In addition, it will be the first time a proven full motion compensated gangway is used in a Chinese offshore access operation.

“We are very excited about this opportunity,” said Vincent Chua, Business Developer at Ampelmann. “With it, we can show the value of our systems and raise the standard of both safety and efficiency of offshore access operations in the area.”