Cameroon: Tower Resources to Farm Out Stake in Thali Block to Beluga 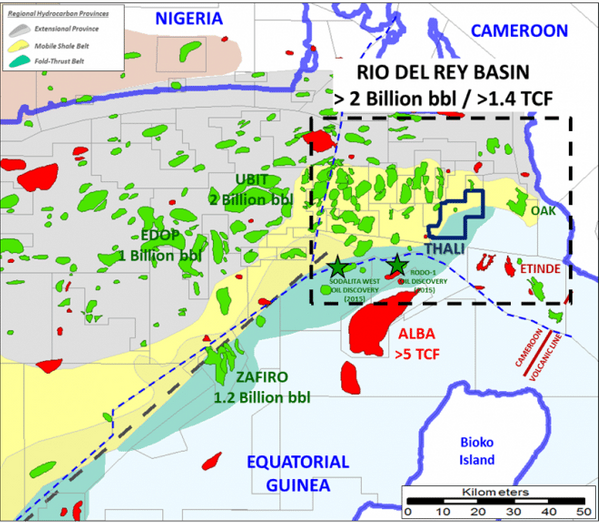 Africa-focused oil and gas firm Tower Resources has signed an agreement to farm out some of its stake in the Thali block offshore Cameroon to Beluga Energy Limited.

Under the binding Heads of Agreement, Beluga will take a 49% non-operating working interest in Thali Production Sharing Contract.

The farm-out covers US$15 million towards the cost of the NJOM-3 well that Tower is planning to drill on the Thali block.

Beluga will receive a 49% working interest in the PSC, subject to an overriding royalty of 10% for Tower's subsidiary TRCSA on the contractor share of production accruing to Beluga under the PSC.

The well cost is currently expected to be approximately US$16.8 million, of which approximately US$3 million has already been spent, Tower said.   Each party will recover costs actually funded and recoverable under the PSC, pari-passu. Costs in excess of $15 million, and future costs, will be funded pro-rata with respect to Tower's and Beluga's working interests.

"The HoA are binding subject only to final documentation, a financing contingency requiring Beluga's shareholders' approval, and approval of the Minister of Mines, Industry and Technological Development ("MINMIDT")," Tower said, adding that the plan is to complete the deal by September 30, 2021.

"Tower, through TRCSA, will remain Operator of the Thali PSC under the JOA, and in the event the formal farm-in agreement and approvals cannot be completed in good time then Beluga will instead receive an appropriate share of the Operator's share capital and Tower's intercompany loans to the Operator, subject to a shareholder agreement, in order to reflect the intended farm-in economics and JOA terms," Tower said.

Tower is currently in talks over a contract for a rig to drill the NJOM-3 well, and will make an announcement when the rig contract and other major service contracts in respect of the NJOM-3 well are concluded. This is not expected to be until after the completion of the farm-out agreement. Tower also said it was in discussions regarding an option agreement over a Mobile Oil Production Unit ("MOPU") suitable for the Thali project, the company said.

Tower Resources in March 2021, received an extension of the first exploration period at its Thali license offshore Cameroon.

The company had, a year prior, declared Force Majeure in respect of the First Exploration Period of the PSC, in light of the restrictions required to combat the Covid-19 pandemic, delaying the planned spud date of the NJOM-3 well in the license.

Tower is planning to drill the NJOM-3 well to test a discovery previously made by Total. The Thali PSC covers an area of 119.2 km², with water depths ranging from 8 to 48 meters, and lies in the prolific Rio del Rey Basin, in the eastern part of the Niger Delta.