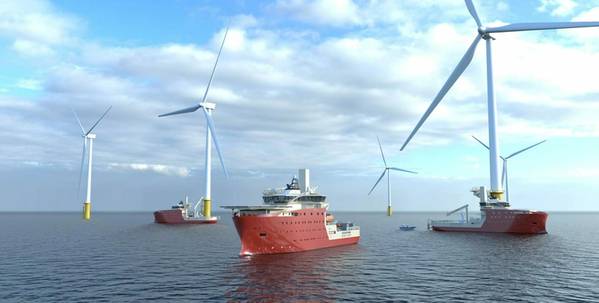 The vessels will be operating on the first two phases of what will be the world's largest offshore wind farm - the Dogger Bank wind farm in the UK North Sea.

Red Rock's Senior Sales Officer James Chalmers said: "This is a great step to strengthen our position in the Offshore Wind market with our 3D Motion Compensation technology, which ensures safe and efficient load transfers from the SOV’s to the Monopile transitions pieces offshore."

The Dogger Bank C, owned by SSE Renewables (50%) and Equinor (50%), is being developed on a different timescale, but will also have a generating capacity of 1.2 GW, meaning the who wind farm will have an installed capacity of up to 3.6GW and will be capable of powering up to 6 million homes.

North Star Renewables, based in Aberdeen-based, in March won contracts worth around £270 million (~$375 million), to deliver three service operation vessels (SOVs) to be deployed at Dogger Bank.

North Star will deliver the SOVs to Dogger Bank wind farm operator Equinor from the summer of 2023 and the vessels will be on charter for a ten-year period, with an option for three one-year extensions.

"The contract award is a renewables-first for North Star and represents a transformational step forward for the company in its energy transition ambitions to become a major player in the global offshore wind sector," North Star said at the time.