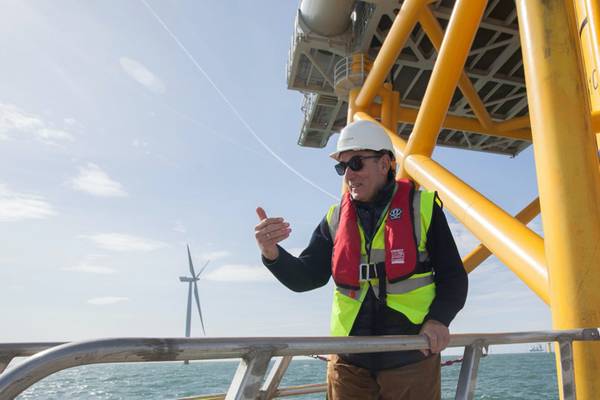 Iberdrola chairman, Ignacio Galán, at one of the company's wind farms.

Iberdrola is looking to new markets to help fuel growth and could even consider spinning off its offshore wind business to raise funds, the global wind power group said on Wednesday.

In first-half results, Europe's biggest wind power group said some 30% of its project pipeline was offshore wind with opportunities for growth in new markets like Japan, Poland, Sweden, Ireland, Korea, Taiwan, and Australia.

Asked if spinning off its offshore wind business could be considered to fund pipeline rollout, Chief Executive Ignacio Galan told analysts it was being looked at, but cautioned no decision had been taken.

"It's a scenario we are already analyzing and we are in an area where we see we have some hidden values inside," he said.

Iberdrola, which makes most of its earnings from renewable energy and grids, has made offshore wind one of its main growth platforms and said it will be taking part in capacity auctions in key markets in Europe, the U.S., and Asia Pacific.

On Wednesday it stepped into the Vietnam market buying a 550 MW pipeline, mainly onshore wind.

"Continued growth in renewables pipeline, now at 81.5GW, is a positive," said broker Jefferies in a note.

A global drive to cut carbon emissions is fanning Iberdrola's ambitions to extend its renewable energy fleet to 95 gigawatts by 2030.

The company on Wednesday stuck to its full-year guidance after core earnings for the first six months rose 10.2%, boosted by stronger renewable energy capacity.

Investments in the period jumped 37% to 4.9 billion euros, with more than 90% earmarked for new renewable capacity and networks and more than half being spent in the U.S. and Spain.

Iberdrola powers more than 30 million homes and businesses in Spain, the United States, Brazil and Britain.

"We expect this positive trend will improve even more in the second half as a result of the accelerated capacity addition, Galan said.