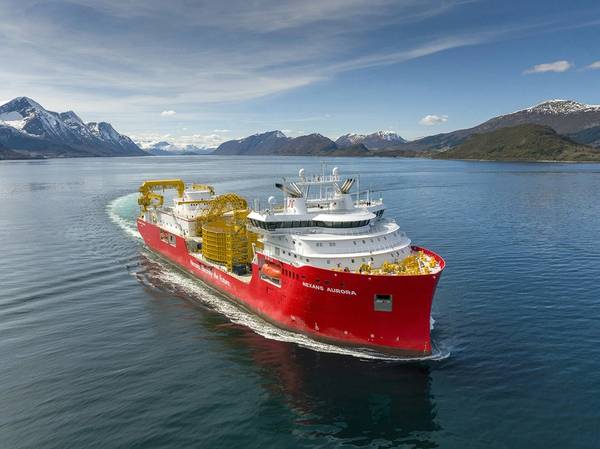 Norwegian shipbuilder Ulstein has this week delivered the cable-laying vessel Nexans Aurora to its owner Nexans.

The vessel will be used for the transfer and installation of subsea high voltage cables and a variety of subsea construction jobs.

The 149.9 meters long and 31 meters wide vessel is equipped for cable and umbilical transport and laying, including bundle laying, protection, and jointing.

Ulstein Group CEO, Cathrine Kristiseter Marti said: "I am proud to see the Nexans Aurora delivered on time despite the parallel handling of the Covid-19 pandemic, with all the implications, restrictions, and delays being dealt with in areas such as production, sourcing, travel restrictions, quarantines and much more. It is an extraordinary achievement that Ulstein has managed to keep Covid-19 off their premises throughout the complete project."

The naming ceremony for the vessel will be held in Ulsteinvik on June 8, before its departure to its home port of Halden.

Nexans recently also secured a contract for the vessel with Empire Offshore Wind, an offshore wind joint venture between Equinor and BP. The JV has picked Nexans as a preferred supplier to connect the Empire Wind offshore projects in New York to the onshore grid.

The turnkey projects cover the full design and manufacturing, as well as the laying and protection of over 300 km of export cables that will deliver renewable energy to over one million homes. Nexans plans to use its Nexans Aurora for the project.