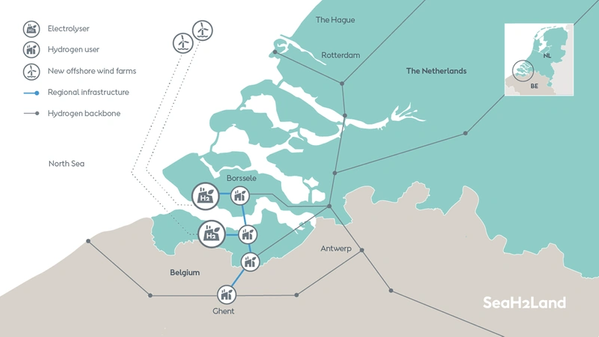 The wind farm would have capacity to produce 2 gigawatts of electricity and would power the 1-gigawatt hydrogen plant. The hydrogen facility would be able to produce about 116,000 tonnes a year by 2030 for use as energy.

Ørsted has not made a final investment decision, and it did not provide details on the proposed budget. The company still needs regulatory approval and to make a full feasibility study of the project.

Hydrogen can be used in fuel cells to generate power in applications such as heavy industry, aviation and shipping. Demand for hydrogen in the North Sea Port area is 580,000 tonnes a year, and a 1 gigawatt plant would cover 20%, Ørsted said. It estimated that demand in the area will have almost doubled by 2050.

Ørsted, the world's largest offshore wind farm developer, has invested in several projects that will use renewable energy to produce hydrogen, which currently is mostly produced with non-renewable sources of electricity such as natural gas.

The proposed plant is supported by a group of companies that will also pursue an expansion of local pipelines to handle the hydrogen. The companies include steel producer ArcelorMittal, fertilizer producer Yara, Zeeland Refinery and chemical product producer Dow Benelux.

Hydrogen is made by electrifying water to separate hydrogen from oxygen.

"As the world looks to decarbonize, it's paramount that we act now to secure the long-term competitiveness of the European industry," Ørsted Chief Commercial Officer Martin Neubert said in a statement.