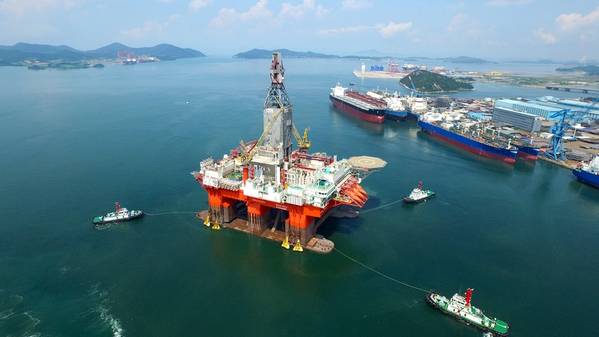 Offshore drilling rig contractor Northern Ocean expects its West Mira drilling rig to return to work by mid-April after it last week experienced an incident in which some production equipment was dropped to the seabed, off Norway.

The incident on Northern Ocean's rig, managed by Seadrill and hired by Wintershall Dea Norge took place on March 19, 2021.

"The manager, Seadrill Europe Management AS, and the client, Wintershall Dea Norge AS, are conducting investigations into the incident and have agreed a plan to secure the production equipment," Northern Ocean.

"Based on current plans to inspect the impacted equipment and perform between well maintenance, the company is forecasting that the West Mira will return to work by mid-April, subject to weather conditions and other factors which may arise. Both the manager and client remain in close communication with the Petroleum Safety Authority," Northern Ocean added.

"While lowering a x-mas tree from West Mira, the winch wire snapped when the tree was five meters below the sea surface. The x-mas tree sunk to the seafloor 368 meters below water level. Eight people were working in the area of the rig where the incident occurred in safe distance from moving equipment," Wintershall DEA said earlier this week.

"A Remote Operated Vehicle (ROV) was sent to the seafloor to assess the situation. The ROV survey showed no risk of discharge of well fluids or hydrocarbons and the x-mas tree has been localized on the template. The well is under control and secured with three barriers," the oil company said.

Almost exactly a year ago, in March 2020, the rig was involved in an incident that involved the unintentional disconnection of the lower marine riser package (LMRP) and an unintentional discharge of oil-based drilling fluid into the sea.

The Petroleum Safety Authority Norway issued an acknowledgment of compliance (AoC) for the West Mira rig in October 2019, deeming the rig fit to work offshore Norway.

However, earlier this month - so before the latest incident with x-mas tree dropping on the seabed - the Norwegian offshore safety watchdog said it had identified serious breaches on the rig and that previously discovered nonconformities had not been rectified as planned.

"When the PSA issues an AoC, it is expressing confidence that petroleum operations can be conducted by a mobile facility in compliance with the regulations. An AoC decision is based on information provided by the applicant in a dedicated application. This document must cover both technical conditions on the facility and the company’s organization and systems for safety management."

"Since the AoC was issued, a number of serious incidents have occurred on the facility, with either serious consequences or a high potential for these. The PSA investigated the incident involving the unintentional disconnection of the lower marine riser package, and this led to an order being issued."

"The PSA has also held a number of meetings with Seadrill, where it has expressed its concern over observations made in audits and investigations concerning the capacity and competence of [Seadrill's] organization and risk understanding on the facility," the PSA said earlier this month.

The PSA also said it had conducted an audit of electrical installations and technical safety on West Mira during week 7 of 2021, which exposed new serious nonconformities and also revealed that previously identified nonconformities had not been followed up in accordance with the company’s response to the PSA.

"Based on our observations since the AoC was issued, we are uncertain whether the preconditions for issuing an AoC to West Mira are still present," the PSA said in a letter to Seadrill dated March 5.

"A brief description of the process for identifying necessary measures, an overview of measure initiated, and a confirmation with grounds that safe operation is being maintained on West Mira must be submitted to us no later than 12 March 2021," PSA said early in March, adding that the failure to comply with the March 12 deadline would lead to "a coercive fine of NOK 50 000 per day" from March 13 until the order has been implemented.

In a statement on Tuesday, March 23, 2021, PSA said that it had been informed by Seadrill "that it has complied with parts of the order given it on 5 March 2021. No coercive fine will therefore be imposed on the company."

"In a meeting with Seadrill on 11 March, and in the documentation submitted on 12 March, the PSA has received a description of the company’s process for identifying necessary measures, an overview of measures initiated, and a confirmation with grounds that safe operation is being maintained on West Mira. The PSA has taken note of Seadrill’s response. The coercive fine will therefore not be effectuated," the PSA said Tuesday.

The offshore safety body has yet to provide its take on the March 19 incident involving the dropping of a x-mas tree, which happened just seven days after the decision not to impose the coercive fine on Seadrill.