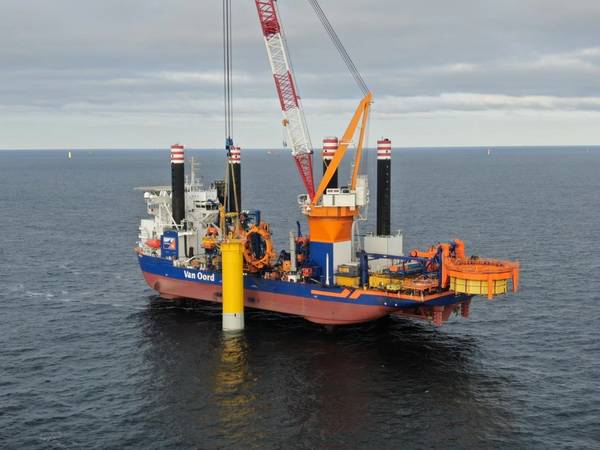 The Borssele site V is located within site III of the Borssele Wind Farm Zone.

To contribute to the energy transition towards renewable energy in the Netherlands and to ensure a cost-efficient fulfillment of the 2030 renewable energy targets, several innovations are incorporated at the Borssele Wind Farm Site V, Van Oord said in a statement.

According to the company, it is the first time anywhere that a submerged Slip Joint has been used on a full-sized offshore wind turbine on a fully commercial basis.

The Slip Joint is an alternative connection between foundation elements, a monopile, and a transition piece. It consists of two conical sections placed on top of each other.

The design and manufacturing of the Slip Joint were certified by DNVGL in the autumn of 2019.

"The seabed surrounding the two Borssele V wind turbines is fitted with Eco-friendly scour protection. This sustainable technology is used to explore how nature and renewable energy generation can be mutually enhancing. Oysters will be placed on the protective layer of rock on the seabed to improve biodiversity and the natural habitat for aquatic wildlife," Van Oord added.

By testing and demonstrating these innovations the Borssele site V contributes to lowering both the LCOE (Levelised Cost Of Energy) and the environmental impact of offshore wind farms, Van Oord said on behalf of Two Towers.

Two Towers also entered into a partnership with Dutch energy company Vandebron. This partnership means that consumers can purchase their renewable electricity directly from this project, the company added.