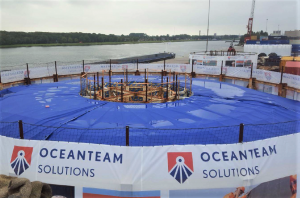 Dutch offshore services and subsea cable storage provider company Oceanteam has said it has secured an extension for a storage contract of 100+ kilometers of subsea cable with one of Europe’s biggest cable manufacturers.

Oceanteam did not say who the client was. It is worth noting that the photo Oceanteam published with the press release is named "Prysmian_storage_press.png" which suggests that the client is Prysmian, which indeed falls in the category of "Europe’s biggest cable manufacturers."

"The 6 months’ extension follows a successful three years of storage of client’s subsea cables in Oceanteam's 5300Te carousel at its cable storage facility in Velsen, the Netherlands," the company said.

"With this extension, the contract will run well into 2021 with possible further extension options," Oceanteam said.