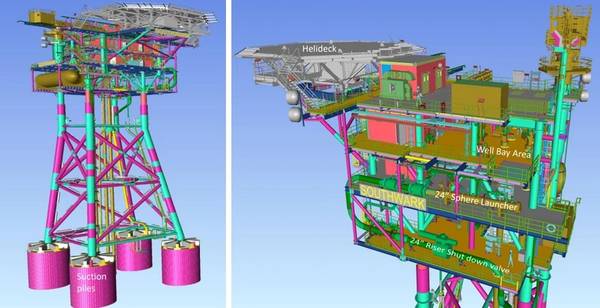 The Core Project comprises gas resources across six discovered UK Southern North Sea ("SNS") gas fields. Phase one, approved by the UK OGA in May, will focus on the development of Blythe, Elgood, and Southwark fields.

"The contract, which is almost entirely lump-sum in nature, comprises the design, engineering, fabrication and installation (including assistance to hook-up and commission) of both normally unmanned installation (NUI) production platforms for the IOG-operated Southwark and Blythe gas fields in the UK Southern North Sea (SNS)," IOG said Monday.

Phase 1 comprises the development and production of the Southwark, Blythe and Elgood gas fields through a total of five production wells with gas transported onshore to Bacton via the 24-inch Thames Pipeline. The Southwark Hub platform will be a key installation both for Phase 1 and other planned developments. The Blythe platform will be the focal point of the Blythe Hub which includes the Elgood subsea tie-back.

"Following a competitive selection process, IOG has been working with HSM since late 2019 under pre-contractual arrangements to ensure that platform design and fabrication activities continue on schedule at the yard at Schiedam in the Netherlands."