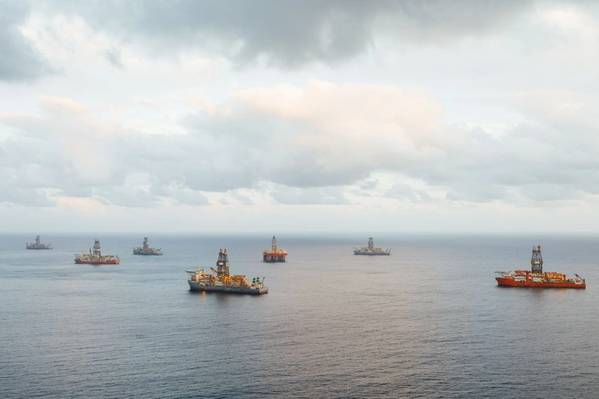 Illustration only: Image by nikkytok

U.S. oil company LLOG has chartered a Transocean drilling rig for the drilling of wells at the Shenandoah project in the Gulf of Mexico.

The news was announced on Thursday by Navitas, LLOG's partner in the project (PDF in Hebrew), who said the contract was for four development wells.

Bassoe Offshore, a Norway based rig broking firm, said on the reported rig deal: "It is understood that the campaign will last for around 17 months and Transocean will deploy one of its new 20K BOP drillships for the work. The contract is valued at around $250 million. Timing for start-up of drilling is yet to be confirmed.

LLOG operates the Shenandoah discovery, located in the deepwater Gulf of Mexico, around 200 miles south of  New  Orleans. Its partners are Venari Offshore, Navitas Petroleum, and Beacon Offshore.

The oil company in October ordered subsea trees designed for pressures up to 20,000 pounds per square inch  ("PSI") for the project. The subsea trees will be delivered by TechnipFMC.

Bassoe Offshore's Bassoe Analytics tool shows Transocean might deploy the Deepwater Atlas drillship for the Shenandoah work. The drillship is on order from Sembcorp Marine's subsidiary, Jurong Shipyard, and has a contractual delivery date of September 27, 2020.

Offshore Engineer has reached out to Transocean, seeking more details on the contract with LLOG, and on the expected delivery of the Atlas, should it be confirmed that the rig has been hired for the Shenandoah drilling and that it will be upgraded for 20K PSI drilling. Transocean did not reply.

Bassoe has estimated the day rate - for a 20K BOP rig - to be around $480,000. While Bassoe, in its note, said the start-up date was yet to be confirmed, the Bassoe Analytics tool places a tentative start-up date to January 1, 2023.

In a conference call last month, Transocean's CEO Jeremy Thigpen said that the delivery date of the Deepwater Atlas might slip to the end of the year, or into early 2021 due to shipyard challenges caused by the COVID-19 pandemic, but adding that there was a high customer interest despite the generally depressing situation in the offshore drilling market created by low oil prices.

"Despite the dislocation between oil supply and demand and the unprecedented decline in oil prices, there remained significant customer interests regarding Atlas and her potential to become the industry's second 20,000 psi ultra-deepwater drillship [after Transocean's Deepwater Titan]," Thigpen said.

He said that Transocean customers who were previously interested in securing the Atlas and then upgrading her to a second 20K rig "are still very much interested."

Transocean has previously said it will be the first company to own an ultra-deepwater floater rated for 20,000 psi operations, the Deepwater Titan.

The drilling company ordered the two rigs, eventually named the Deepwater Titan and the Deepwater Atlas, from Jurong in 2014 with plans for rig deliveries in 2Q 2017 and 1Q 2018, respectively.

After several delays, the company, on December 31, 2018, announced it had secured a rig design and construction management contract, as well as a five-year drilling contract, with Chevron USA, Inc. for what is now known as the Deepwater Titan.

The contract called for significant upgrades on the rig, including two 20,000 pounds per square inch blowout preventers. National Oilwell Varco last year said it had sold two 20,000-psi (20K) blowout preventer (BOP) stacks to Transocean, expected to be deployed on a Gulf of Mexico well in 2021.

Per the latest fleet status update, the Deepwater Titan will start its contract with Chevron in the fourth quarter of 2021 in the U.S. Gulf of Mexico, on a dayrate of $455,000.