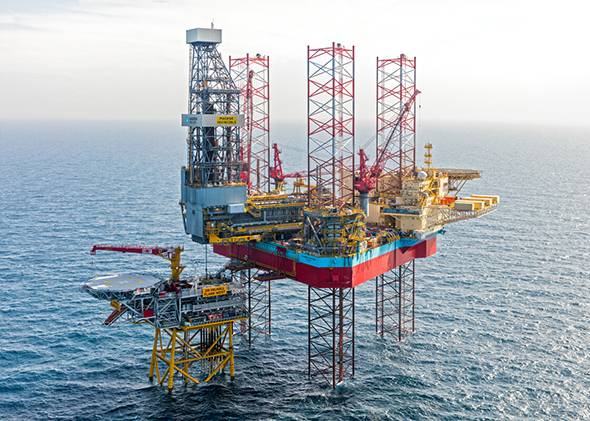 Aker BP said last Friday that, over the course of 11 months, the Maersk Invincible drilling rig had set 12 conductors, drilled nine wells and drilled 22,000 meters of the reservoir.

The Maersk Invincible jack-up arrived on the Valhall field in late June 2019. After the 12 first large conductors were set, the rig drilled an average of one well per month. A total of nine wells have been drilled and completed. Three of these are multi-branch wells.

“This would not have been possible without a strong alliance team capable of bringing out the very best efforts in each other. Compared with a comparable campaign completed outside the alliance, we see an improvement of 88 per cent in average rate of penetration and 186 per cent improvement in connection times. Congratulations go out to everyone involved,” says Sigmundstad.

First alliance project for the rig

The drilling program on Valhall Flank West is the first project delivered through the alliance and Maersk Invincible.

“It all started with batch setting 12 conductors, where we had a fantastic learning curve and ended up 15 days ahead of our estimated time consumption. This learning curve has simply continued to grow. We’ve had some challenges, but they were resolved in a very good way because the whole team has pulled in the same direction. Now, as we look ahead, it’s important that we capture the lessons learned, so the alliance can continue to deliver good projects,” says drilling superintendent Anders Linndal.

According to Aker BP,  last winter, the rig set a new record on the Norwegian Shelf when it drilled 2278 meters in a 12¼” section in 24 hours. Maximum drilling speed achieved by the rig on the record-breaking day was 280 meters per hour.

“I want to thank the entire drilling and subsurface team offshore and on land. We achieved this milestone because we’re constantly improving all parts of our performances. Behind this record lies a lot of hard work, fantastic craftsmanship and a strong team throughout the entire operation,” says assistant drilling superintendent Knut Eugen Svendsen in Aker BP.

“We push the envelope because we constantly manage to tackle bottlenecks together, as an alliance team,” says Tor Kvinnesland, Rig Manager on Maersk Invincible.

Maersk Invincible also held the previous drilling record in Aker BP, with 1953 metres drilled in a single day. That record was also set on a well on Valhall Flank West.

Valhall Flank West came on stream in December 2019, just two years after the Plan for Development and Operation was submitted to the Norwegian authorities. The giant Valhall field has produced more than one billion barrels of oil equivalent since the field was opened in 1982. The ambition is to produce another billion barrels over the next 40 years.

The Maersk Invincible jack-up rig will remain on the field through the summer to assist in ongoing well stimulation work.

"Aker BP has been the first company in the world to use a new method of well stimulation offshore. The single-trip multi-frac technology (link), which yields faster and thus less costly stimulation, is used on Valhall Flank West. Four wells have started producing so far. The remainder are expected to start up through the year," Aker BP said.