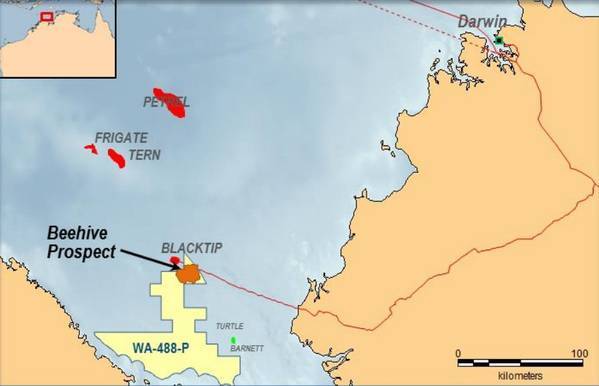 Australian oil and gas company Melbana Energy has been given more time to work on its Beehive offshore prospect in the Bonaparte Basin off W. Australia.

The company said Friday that the National Offshore Petroleum Titles Administrator had approved Melbana's application for a 12-month suspension of the work program conditions in respect of Permit Year 3 (with a corresponding extension of the permit term) for the WA-488-P block containing the Beehive prospect.

The offshore block WA-488-P contains the giant Beehive prospect – a carbonate build-up that has been independently assessed to have a prospective resource of 388 million barrels of oil equivalent (best estimate).

A 3D seismic survey has been completed over the prospect and considerable progress has been made on planning and permitting for an exploration well.

Melbana is on a lookout for a drilling partner for the Behive, as Australian oil and gas company Santos, and France's oil giant Total who had had options to farm-into the block, opted not to.

Beehive, sitting in a water depth of 40 meters, is located close to several existing facilities, including the Ichthys project and Blacktip field and pipeline offering several options for future monetization, Melbana has previously said.

Melbana Energy’s Executive Chairman, Andrew Purcell, said: "We will use this extra time to continue to evaluate the 3D seismic results and further progress discussions with potential farminees for the drilling of an exploration well into this structure. These types of carbonate buildups are responsible for some of the world’s largest discoveries. When they work, they tend to work big, as can be seen in the estimates of prospective resource being significantly skewed to the upside, so we will continue to work towards the drilling of this important prospect.”